It has been a peaceful few days in KCMO and that might lure locals into a false sense of security on the topic of violence and our horrific homicide count.

Fact is . . . The rate of killing in Kansas City remains a constant overall as this town ranks among the most dangerous cities in the nation.

Accordingly . . . A recent message was sent our way with the tagline . . .

Responded "Yes" when asked if there is a "a racial profiling problem in Kansas City, and not enough police accountability for improper targeting of race" 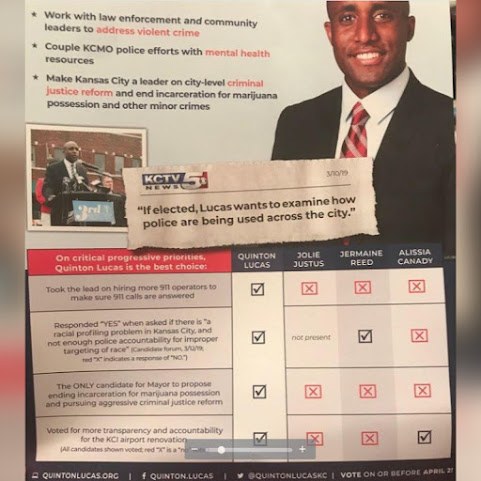 The pull quote from KCTV5 reminds us that KC voters are also picking a police commissioner as well . . .

"If elected, Councilman Quinton Lucas wants to examine how police are being used across the city."

In fairness, Councilman Lucas has been up front with ALL of his ideas to promote racial justice. Part of his platform . . .

- Eliminate jail time for the majority of municipal offenses

LEGAL WEED AND AMNESTY SEEM LIKE A GREAT REASON FOR MANY TKC READERS TO SUPPORT COUNCILMAN QUINTON BUT RACIAL PROFILING PUSH BACK RISKS VOTES FROM POLICE & THEIR SUPPORTERS!!!

We turned to one of our cop readers in an early morning message and here's the hot take . . .

"None of the candidates for mayor are very strong on crime or support for police. But Councilman Lucas seems to be the most active in wanting to 'reform' the department. That's not always a bad thing but a lot of his ideas are contrary to policy or they're procedures that we already practice. Bottom line: I doubt he'll get many votes among law enforcement."

There's some truth to that last comment but one thing you're not considering is this: There are a lot of minority police officers that want Quinton in office and would welcome more change.

The marijuana vote along will get him into the primary. I wish more candidates would consider doing something similar. Just look at what happened in Missouri for medical marijuana last November. The politicians and police are lagging behind the public when it comes to change.

At least he's talking about police and crime. The rest of the candidates seem to obsessed with their won meager resume. Give Quinton that, at least he's not afraid to speak on the real issues.

What about Jolie's crime fighting? Crime in her district has skyrocketed over the past 4 years but she doesn't have any plan.

If it mentioned violent crime that could be considered racist since the blacks perpetrate 90% of it.

Every cop I've talked to has said he's their pick for mayor, so go figure.

There are already parts of KCMO that are lawless zones.
Why not expand that to include the entire town?
What could possibly go wrong?
Once again, the 85% of the population of the metro who DON'T live in KCMO congratulate themselves on making such a wise choice.
Momentum!

^^yep. And there's nothing you can do about it.


This Lucas character has done nothing but play the race card. If he feels the police are racist then I would suggest not voting for him. He will just cause crime to go even higher and work against law enforcement.

I like him but the game he's playing in political arena sucks and he's not qualified to run a city. He could have successful Law Firm of his own but I suppose the easy bling and fast cash of KCMO politics was to tempting. It's weird.

The easy bling and fast cash of KCMO politics said...

Examine Quinton Lucas’ “track record”! I personally question why did he wait to run for mayor before he decidedl to address socioeconomic issues that have been prevalent long before his election to City Council?

Well what was already a bad week for Democrats/Socialists like Quinton, Justus just got more complicated.

^^ Construction to begin immediately. That is weird!

Next step from "KCMO Municipal ID Card...identification regardless of immigration status" will be voting with ID card only.
California madness. Adios America!

Your comment doesn't make sense unless you personally know each cop that 7:25 talked to, and also that that cop told you who he was voting for.

If you're going to troll your soon to be Mayor Lucas and his supporters please try harder. Otherwise it's just not fun for us here on the winning side.

Speaking of winning, not too late to place your bets out West wherrrrrre...
VEGAS
FAVORS
LUCAS!

100% of the non white vote goes to Lucas. That's plenty for the primary and probably enough for the final. This isn't that hard guys.

Ever notice how those running for Mayor in Kansas City all harp about what should be and needs to be done right before election and as soon as said election is over they all develop amnesia over their promises.

What's worse is most have been in office and have not tied to really do any of the things they now all of a sudden think is important.

So do you elect them based on promises or do you boot them out the door for failing to do what they should have already been doing.

The time has come to sweep the dead weight do nothings out the door and no longer listen to their lies and fake campaign promises.

Before the city can be rebuilt and repaired to what it once was the voters are going to have to remove that which has allowed it to fall into deeper disarray and placing it on the edge of financial ruin.

Wait, there's people that actually support amnesty in KC which is stealing jobs and raising housing costs for the african american communities and others who are marginalized. We need to take care of them first.

@9:39 - you nee to actually read something other than the Fox News headlines - the Pentagon has moved $1 billion from support of the combat troops and veterans, but it's to upgrade 52 miles of the existing Fence, not build s dumbass useless Wall!

Well Quinton was a dude who came to town flashin his bling and gettin round town, didn't have a clue but managed to gain some ground
Got himself a slick and shiny law degree, wheezled his way into the city scene, had a few drinks and slept it off in the car

It's safe to say that this brotha won't be getting elected mayor. Steve Miller maybe. Jolie also needs to stop acting smug as if she's already got the job.

Better watch out, or you'll feel the wrath of the Black Punter!

She may have 10:45, look at how many times the voters wants and what was delivered didn't always add up. But the Judges around here always side with the city on those matters so Jolie might know something the rest of us don't know and that is, the fix really is in.

so another words super Dave they're not much different than you, only they actually don't just sit around all day and post on this stupid fucking blog.

^^^^^^Ohhhhh Dave struck a nerve it appears. Did Dave piss you off posting the truth here 10:51? Why do you sit around all day reading this blog if it is stupid 10:51?

Prosecutors have dropped all charges against US actor Jussie Smollett for allegedly staging a racist and homophobic attack.

It has been a peaceful few days in KCMO

Quinton Lucas is the only one who is addressing the political issues of the day. The police may not like it, the racist may not like it but the public wants to talk about issues for a change.

The issue is all the murders, who’s doing it, who are the victims.

...and, yet you're lying about SD, plus lying about the bubble butts and big guts in politics not just sitting around all day. Weird.

Did Lucas get Lawrence mixed up with killa shitty when he says racial profiling? He needs to prove that racial profiling exists first, compare pulling the koloreds over for actual breaking the laws vs the ones who were pulled over for nothing, I think he’ll find that 99% deserved to be pulled over. One other point is where are they getting pulled over at, 99% in the hood for speeding, broken lights, no license plates, expired tags, the list of laws they break goes on and on. There’s more to it than just plain old numbers of who gets pulled over, there’s a reason other than being kolored and it’s called breaking the law.

I know a bunch of cops and not one has said Lucas is their guy or that the dept as a whole wants him, they don’t want the pussy eater either.

We appreciate your support. Luckily for you, Lucas has prioritized preventative treatment for drug addiction and the mentally ill. We're here to help.

I'm voting for Quinton and you bitches can't stop me.

What a bunch of silly B.S., you bitches need to get a LIFE!

GOD I am glad I don't live in KCMO. Almost one million people and you can't find anyone better than this group of clowns to run for mayor or city council?
I'd say that speaks volumes about why you have crime, poor schools, DEBT out the butt, and everything else that just makes people shake their heads.

If people like Lucas are so interested and concerned about the sea of issues in KCMO, why haven’t they done more as council members? Does the fat black turd bitch slap them for pointing out issues? Lucas is one of the worst candidates running and he knows it, that’s why he opted for the negro’s silver bullet - the race card. When all else fails, it’s their trusty crutch. Just like Justus will play the lesbian card. Gotta cash in on those victim points anytime you can. Not that any of it matters that much. KCMO is so effed up already, it’s just gonna be more of the same unless Clark Kent decides to run.