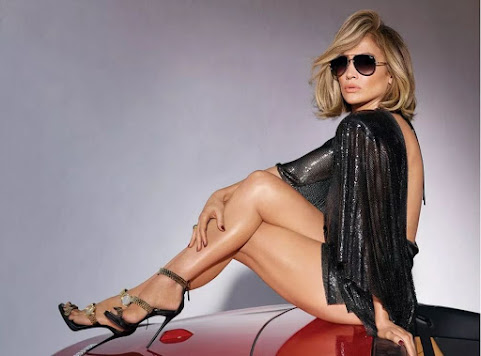 J-Lo is 49-years-young and still showing off her nalgas to sell merch in what is not only a testament to her talent but also a Throwback Thursday glimpse at pop culture changing traditional perceptions of age for the sake of consumerism. Checkit:

Closer to home, here are the news links we're checking out right now . . .

Great news on the new single terminal KCI. But for now, once you enter into the lock-down zone known as the Southwest gate area, the women's restrooms are atrocious.

It will probably be another week before the Missouri River at Parkville, Missouri, is back in its banks. The latest National Weather Service map predicts sometime next Tuesday or Wednesday. But merchants around the quaint downtown are weathering the flood just fine. "It's been great for us.

The quick-takes from Kansas City-area teachers, featured in the video above, indicate that these classroom leaders have done some learning of their own when it comes to preparing their students for the world of work. The upshot is that they see workforce prep as more than just teaching the basics.

FC Bayern Munich will face AC Milan at Arrowhead on July 23 rd as part of the International Champions Cup. This year's tournament will have 12 clubs playing 18 matches across the United States, Europe and Asia. This is the seventh edition of the ICC. Tottenham is the defending champions.

Flash flooding is a concern.

"Before new terminal is built, fix restrooms | The Kansas City Star"
The Star and 12th and Oak must have had a fallen out or Slie did not push some of the slush fund their way.
At least 3 times the Star is going against the 12th and Oak minions, not recommending Justus, not supporting the pre-K scam and now advocating the repair of the planned obsolescence airport's failing restrooms.
Climate change must be causing the Star staff's minds to get frosty.

Jenny From The Block leads the Female STEM parade!!!

According to the Aviation Department, the restrooms on the airline side of security are the responsibility of the airlines. Moreover, we've been told for years that there was no way to expand them beyond what they are which is why the only solution was a new terminal. If this is not the case, and they fix them, someone needs to be sued or charged with fraud.