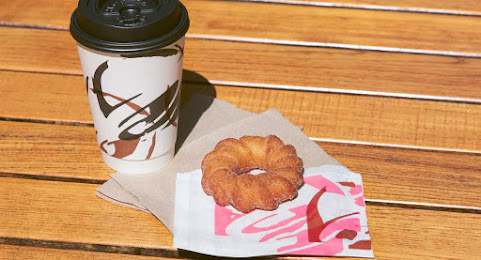 A few social media questions have been raised but unanswered, as always we bring the most definitive and important information to our blog community FIRST. Here's the only headline that will have an impact on local lives during election season:

"Starting Thursday, April 4, the Churro Donut will be available during breakfast hours for just $1. Of course, like all good things, there is a catch: it’s currently only available in Kansas City, Missouri."

It’s a churro. It’s a donut. It’s a combination of two perfect sweet treats supporting each other. Desserts helping other desserts is what will bring us all together! Also, it is exactly what you expect it to be: a churro shaped like a donut.

Taco Bell’s Churro Donut kind of looks like a french cruller donut, swapping out a standard glaze for a cinnamon sugar dusting. Per a press release from Taco Bell, the Churro Donut takes “a warm, circular churro, deep fries it to a crisp golden brown then dusts it in cinnamon sugar.”

And this is how a lot of diabetics in Kansas City will lose their foot.

A dozen of these and a six-pack of Bud's Michelada is gong to become the KC Mexican population's favorite lunch, and cause all the "Bean & Peppers" joints on the Boulevard to shut down - just wait and see.

^^ Why do you still pretend to be blind and steal from taxpayers?

Addictive ingredients make you crave them, fortnightly! And, you will be blasting bigly, like cow farts said...

Just like I love my chicas, round and sweet.