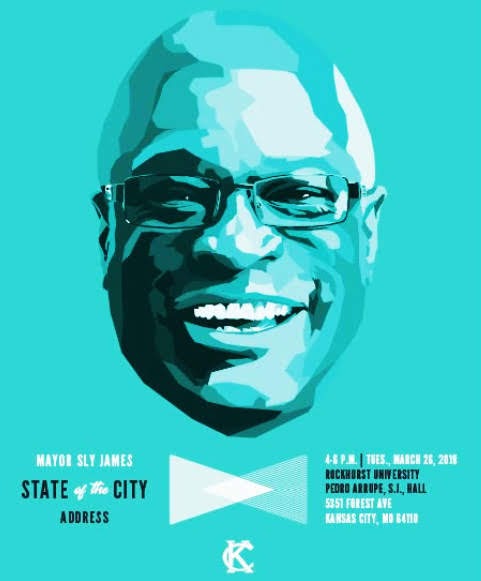 The lame duck Mayor is wildly unpopular as he leaves office and on the brink of finishing his term backing a loser Pre-K sales tax.

He was never beloved but after delivering one tax increase after the next to The Greater Kansas City Chamber of Commerce & The Civic Council . . . He earned respect among elites for his ability to play spokes-model. Sadly, now that his credibility is used up . . . His former big money friends don't have a lot of use for him by way of public office representation . . .

- The water is brown but City Hall says we should still drink it down. Slowly.

- Murders continue to trend upward and KCMO ranks as the #5 most dangerous town in the nation.

- Streets are filled with potholes and only Ward Parkway is getting things fixed.

And so, here's the invite and a preview of the swan song of this social media politico.

Join Mayor James for the his final State of the City Address. It will be an opportunity to reflect on the last 8 years of Kansas City's growth and development, and look forward to the city's next chapter. This event is open to the public and we encourage you to attend! If you are unable to attend, the event will be livestreamed on Facebook Live and available for later viewing on Channel 2 and kcmo.gov.

He can say whatever he wants before he leaves. Just as long as he leaves.

It's not a lie if you believe it said...

He'll peedle the same crap that he has for years and just said at the "groundbreaking" for the airport terminal.
KCMO has become not just the center of the country.
It's the envy of the entire civilized world.
THE streetcar!
All the millenials are moving downtown!
Downtown is a vibrant, energized, sophisticated, diverse urban environment!
A new airport terminal will bring many millions more tourists!
And all this and more are due solely to his amazing leadership!
Surely the public will respond and give him the keys to another vault of public money.
A legend and celebrity in his own mind.
More Kool Aid, please.

Anybody but Jolie Justus

I hope he states his views on unsolicited bulk email.

His words will be: I won. You lost.

"- Streets are filled with potholes and only Ward Parkway is getting things fixed."

Wrong. I was on Ward Parkway Saturday, and not even it is getting fixed.

^^But were you on it today? because it sure as hell is today! Go away troll!


He'll preach the same thing his best friend Bill DeBlasio does even though DeBlasio has taken NYC down to the bottom of the cesspool, Sly has done the same to KC. Sly is the most laugh at Mayor in the metro area over and above Funkhouser and so are the people who voted for him. So if you live in the KC city limits don't move to the burbs you won't be welcomed.

8:05: No. I have not been on it since Saturday. I've been taking alternate routes to avoid it. It's great news the city is fixing Ward Parkway. Now, when are they going to fix the other streets, including 75th at State Line with its "welcome to Kansas City" crater?

While Sylvester sings the blues, KCMO drowns in the red!!!

He'll preach about all the great "momentum" KC has with the street car, the 800-room convention hotel, the airport, etc.

What he will omit from the speech is how much debt he and his administration has created over the last 8 years, how many 10s of millions of dollars per year get diverted from city coffers to private entities, and the mass number of tax increases that have been put in place during his tenure.

In essence, he'll preach a lot of sizzle but very little (if any) meaningful substance.

Won't cost the taxpayers a dime! Keepin' it frosty!

Ordinance 190027 Authorizing and directing the incurrence of a Senior Appropriation Obligation in the principal amount not to exceed $900,000,000.00 in order to evidence the agreement of the City of Kansas City, Missouri (the “City”) to make certain debt service and additional payments to The Industrial Development Authority of the City of Kansas City, Missouri (the “Authority”) in connection with the Authority’s issuance of bonds, the proceeds of which will be made available to the City to finance a portion of the costs of the construction of a new passenger terminal at Kansas City International Airport and related purposes as set forth herein

^^ So this Ordinance approves an obligation for the City (i.e. the Taxpayers) to provide to the Industrial Authority $900 million (of our Dollars) so the Authority can issue bonds to raise cash that the Authority will then "lend" to the City so the City can make a start on the new Airport, which "the Airlines are going to pay for" right?

Twenty five years in the Municipal Bond business, and this is a new one on me.

Send Tony locations of horrible pot holes and pictures. Lets get this rolling on tagging them and making clear what is out there. This is a participatory citizens brigade calling for an action.

Tony's only interest is stirring the pot. He wont lift one fat,greasy finger to do anything to actually help.

How can we screw thee? Let us count the ways.

Thank you for your leadership & vision. You have established a solid foundation for #kcmo's future!


ROFL god the mindless unthinking idiots in this town are astounding.

Too bad he has saddled his successor with all the debt and potential to have to pay for the Airport improvements.

...and, yet Gopher is bigly threatened by the truth. See you at the ribbon, er, I mean, pics/vids reveal SOON. Weird.