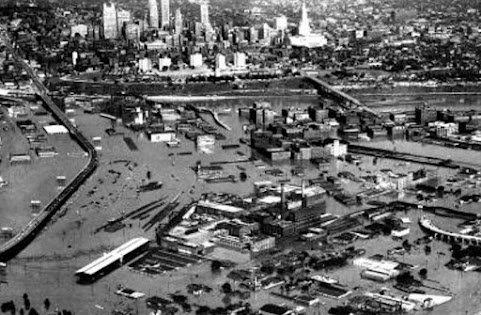 The great flood of 1951 put a great deal of this town underwater and already it looks like locals are watching the rising tide threaten rural areas and move toward the metro.

“The flooding is causing water treatment challenges for KC Water,” according to a release from the water department for the city of Kansas City, Missouri. “ Due to the changing characteristics of the floodwaters coming down the Missouri River, the source of Kansas City’s drinking water, customers may notice taste and color issues during this time.”

KC Water stressed that its water is continuously monitored and tested, so it remains safe to drink.

And now, a glimpse at some of the most informative regional news links on the ongoing flooding:

Accuweather: Entire Missouri town evacuated as historic flooding rages on throughout the central US

KSHB: Some stay home while others leave pets at shelters during flooding

NPR: Missouri And Kansas Residents Are On Alert As Flooding Could Head Their Way

UST: 'It looked like an ocean': Severe Midwest flooding could last all spring

Talk about rapid responses, the KC water has been tasting like either sewage or a second-grader's chemistry set experiment for two weeks!

Despite KC Water's assurances, all this demonstrates is how vulnerable our water supply is.

One does not have to be a "survivalist" to b cautious enough to obtain a method of purifying what comes out of the taps.

I wonder what the permissible level of contaminants and disease is acceptable anymore, the standards have certainly slipped to unacceptable levels in the last five years, maybe that’s why sLIE only drinks from bottles.......

^^did you call the water department to find out? Then you wouldn't have to wonder anymore and subject us to such awful posts!


No matter who you call you will be lied to, so just go to the store and buy bottled water and hope that it's better. Didn't we have a problem with this way before the flooding? So much for that huge water hike everyone trusted Sly about when he said we needed better water treatment. You're paying more money for water that is worse than before.

^^Umm...never really worried about the water before and still don't. No idea what the fuck you're talking about. Seems like you just want to bitch to bitch. Bitch.

8:32 again demonstrating their total lack of what's really going on around here.

Drink up! Your drain bamage is all too apparent. said...