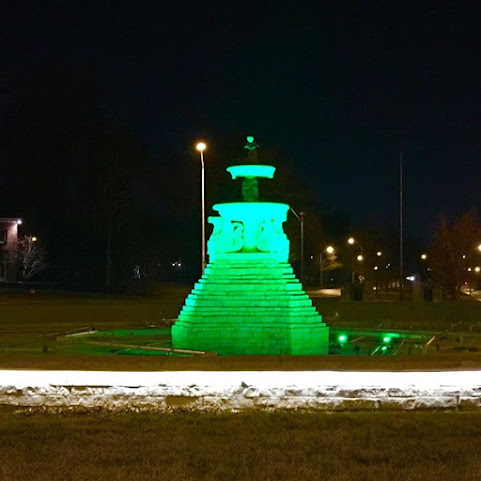 Sadly, the fix didn't take and now local big money donors are on the hook for even more cash.

Less than two years after a $1 million makeover, the Meyer Circle Seahorse Fountain is once again in need of a repair job . . .

In 2017, neighborhood groups and private foundations raised just over $1 million to completely renovate the 94-year-old fountain. Prior to that, the fountain had been dry and dormant since 2015.

Kansas City Parks and Recreation officials tell FOX4 they first noticed a large chunk of the fountain’s lower bowl, which included a sculpture of a lion’s face, had crumbled into the basin floor.

City officials do not suspect vandalism and expect private foundations to, once again, cover the cost of repairs. But unfortunately, the city doesn’t anticipate the Meyer Circle Fountain to be functional in time for the city’s "Fountain Day" on April 16.
#########

Only the developers get a real fix in KC.

KC has been good to Tony ... I think he should fund the repairs as a civic gesture of goodwill.

The city of failed fountains.

J E Dunn was the contractor!

It would be nice if the contractor stepped up to fix the fountain FOR FREE. A million dollars should last longer.

Can we sell back the new street cars KC just bought? That would would be enough to fix the fountain!

^^No we can't. Nor would we want to. Dumb idea. Written by a moron.

I only see one moron and he is in here everyday talking out his ass. Yes 10:37 I am talking about you.

We could always make Meyer Circle a toll road.

Make it a hooter's carwash and that will pay for the improvements.

Just don't let any well fed council women get in there

The city never allocates for maintenance, like the Liberty memorial, the fountain, and then this stuff happens. Go along Brush Creek near the Kaufman Garden. It looks like some third rate slop bucket.