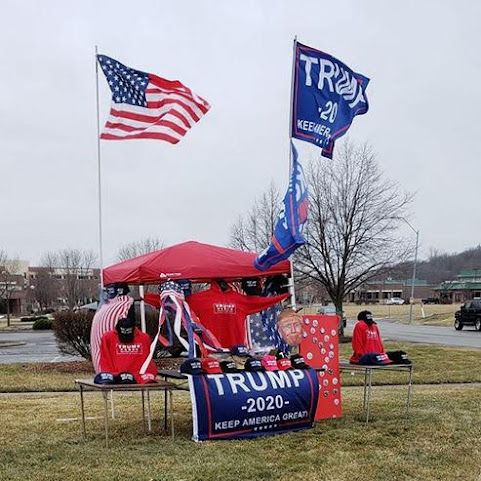 Whilst football fans gear up for the big game tonight, one of the best community reporters in Kansas City shared this image of controversial merch near 40 Hwy and Arrowhead Drive that's causing a local stir.

Whilst some claim that MAGA hat is akin to a KKK hood . . . This knockoff merch seems more opportunistic . . .

IS IT TOO EARLY FOR MAGA FANBOYS TO BUY PREZ TRUMP 2020 MERCH???

Critics might claim that waiting for the results of the Mueller investigation might be more prudent. Meanwhile, the hustle of KC merchants selling sketchy goods must be admired.

Newsweek: Donald Trump Jr. Will Be Indicted by Mueller, Former Prosecutor Says, and Will Help to Ensnare His Father

I wouldn't call it knockoff but I really doubt that the "Keeping America Great" slogan is going to stick. Admire their willingness to take on a lot of trolls.

I hope someone does a drive-by with piss balloons.

I’m going Trump 2020 too. Have you seen the Democrat lineup so far for 2020? Complete trash. Not only that but the progressives are going to start eating each other alive soon in their quest for power.


Look at what the state of New York has done when it comes to abortion. Abortion at 9 months pregnancy. That’s just pure evil. Sea turtles have more protection than babies. Don’t forget that good democrat governor of Virginia, but.....trump is the nazi, right? Lmao

This merchandise is only controversial to those who want to label a MAGA hat as a symbol for anything the left deems offensive to them. I think the pussy hat is offensive. To me it symbolizes 638,169 abortions in 2015 (CDC numbers). See how that works? It's a ridiculous association, and serves only to limit the campaign slogan of Trump. I am not a Trump supporter, but I am even more against those who want to limit the free speech of the opposition.

I’m heading down there right now to get my trump stickers, flags and hats! Happy days are continuing!!!

I’m serious, I need some stickers!

11:15 geezer hater is what we call in the abortion biz “an abortion gone wrong”

might as well earn a few bucks off the geezers and goons.

The orange cheeto will be in jail by 2020. Thank you Bob!

Most of the Trump supporters are not educated on whats realistically happening in the US. They only go by what they see from Russian memes. and Trump tweets. Any other GOP or independent gets my vote.

For Trump 2020 to be relevant he has to still be in office. That's a toss up.

The NEW WORLD ORDER will not put up with another Six years of TRUMP They don't want The U.S.TO BE A national country They don't want the U.S.TO TAKE CARE OF there own country first .They want the taxpayers to contribute to World projects .and a carbon Tax .THE Deep State and neoconservative sold this country out Starting With the First BUSH President .Set Back and enjoy the show.

Lots of Democrats running for president but the all are either a #MeToo cunt or a homosexual cocksucker or a negro. Or a combination of those.

For those that don’t remember, Newsweak was bought for $1.

I got my bumper stickers down there today and it was amazing, the people were buying things left and right, also, the people driving by were honking in support of President Trump and these women selling merch, pretty cool!

10:18 9th month abortions? Go ahead and cite a reputable source for that.

Cult45 members, I have a dare for. I know you won't do it but hear me out. Read a book called the Fifth Risk. The library has it.

MAGA hats have nothing to do with the KKK and librals know that. Liberals get the hell over yourselves. The California KKK voted for Hillary. Dumb asses. Oh and how about the VA Gov. Hypocrites.

3:40 - google it if you want to know. You’ll see the governor signed the bill expanding rights to allow abortions after 24 weeks for almost any reason and not limiting to a viable fetus or the life threatening exemptions required in the past. 9 months is after 24 weeks if you needed help with that too. I’m not against all abortions but this is just sick.

Here you go 4:31. Abortion is only legal if the baby isn't viable or the mother's life is in danger. As usual cult45 members are unknowedgable. Keep believing everything Fox tells you though.

3:44 read the book "None dare call it conspiracy" published by Patriot Press.

5:34 I'll give it a shot. None of the libraries around here have it and I hate reading books on a computer so I'm going to have to hunt it down.

Just bizness my man. Trump assholes will eat that shit up. The guy selling it is probably a Lib or a Russian.

"None Dare Call It Conspiracy" - John Birch crap. Political scale in it drawn in a straight line, from left to right. Far right point is anarchism, with point just to the left of it 'Constitutional Republic', which is what the U.S. supposedly falls into (according to the tin-foil hat lunatic that wrote this insane gibberish). Many folks have it right next to their bibles....nothing like enlightened education for the masses.

MAGA - We are still waiting.