TKC QUESTION: WHO SHOULD WE BLAME FOR KANSAS CITY TOTAL STREET FAIL AMID TYPICAL WINTER SNOW?!?!

We can pretend that today's snow was some kind of six-sigma event but the reality is that Winter weather shouldn't really surprise residents.

KANSAS CITY STREETS SUFFER FROM SUCH INCREDIBLE DISREPAIR THAT THE SLIGHTEST INCLEMENT WEATHER SHUTS DOWN THIS TOWN!!!

Call it misplaced priorities OR maybe a conspiracy to push everybody without access to a 4-wheel-drive truck out of the loop.

WHO SHOULD KANSAS CITY BLAME FOR TODAY'S WINTER SHUT DOWN?!?!? 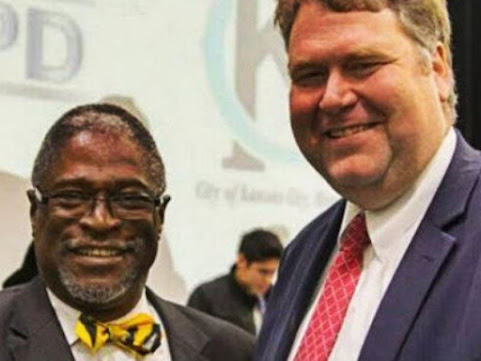 - Local streets look like a war zone filled with bombed out craters - 1400 and trending upward.

- Lackluster snow removal efforts have been a consistent complaint throughout the Winter.

- The tenure of Mayor Sly James has been almost completely focused on development perks along with outright animosity toward drivers thanks to Bike/Walk advocates.

All of these criticism are deflected by hype for public works admit this snowstorm seem to be designed to to keep everyone off the streets. But the fact is that bigger, better cities don't shut down during winter like this town.

The big picture is even scarier . . .

As the Prez attempts to myth-bust fear of global climate change skepticism many critics say he's really part of the problem.

Nevertheless, this blame game is important if only because nobody in KCMO is stepping up to talk honestly about the sad state of local roads or work towards a solution.

Accordingly, these news links offer a glimpse around the metro and the world in search of an explanation of today's FAIL . . .


Neighbors help one another in latest blast of winter weather

OLATHE, Kan. - In these frigid temperatures, there are plenty of warm hearts. As the snow continued to fall Friday at Larry Hoff's home in Olathe, he broke out his snowblower - a Valentine's Day gift - so he could get to work and do an act of kindness for his neighbor, who is recovering from heart surgery.

Donald Trump attacked Amy Klobuchar on Sunday, in a tweet that appeared to demonstrate a lack of understanding about climate change. The Democratic senator had announced that she was running for the presidency earlier that day, in a speech delivered as snow fell around her in Minneapolis.

Anita Hendricks SOURCE: Anita Hendricks MoDOT is urging motorists to avoid unnecessary travel on the roadways Friday due to escalated snowfall rates.As forecasted, heavy snow moved into the Kansas City viewing around around 9 a.m. and is expected to continue through Friday evening.

KANSAS CITY, Mo. - After another snow storm blanketed the Kansas City metro area Friday, crews are just as fed up with winter, as those who live there. For the past three winter seasons, Betty Marcos has been a snow plow driver for the Kansas Department of Transportation.


Harrison Ford shreds Trump and other leaders who 'denigrate science'

Harrison Ford has taken a thinly veiled swipe at Donald Trump over climate change. Speaking on the final day of the World Government Summit in Dubai, the Star Wars actor said those who "deny or denigrate science" will end up on the wrong side of history.

Lesson In Make Up Daze


Let It Snow Or Make It Stop? Wintry Weather Could Drag The School Year Into June

It feels like it hasn't stopped snowing since Thanksgiving weekend, and school's being called off frequently. That may have parents wondering exactly how many days their kids will have to make up. The answer: It depends. Kansas City Public Schools are currently scheduled to end May 31 - already a week later than originally planned.

The World According To Troy

From the future of a downtown ballpark to "pothole management" to streetcar expansion, we talked with the city manager about several big issues on the minds of Kansas Citians. Schulte also addressed caller questions, and says of rising water costs in Kansas City, "we're hopeful we can get a new environmental agreement done for the next 17 years of the plan, and the days of double-digit rate increases are over."


Just about anything with an incline slowed drivers Friday in KC

"Everybody knew what the weather was going to be like today, and they still wanted to go out," plow driver Adam Shelton said.


Snow to taper off Friday evening

The snow will get lighter but roads will still be snow packed. Temps will drop down to about 8 degrees. On Saturday, look for partly cloudy skies with a high of...

OVERLAND PARK, KS (KCTV) -- The ice storm that came through weeks ago, leaving cities caked in layers of ice and snow and weighed down trees, is still having lasting effects in most areas. Many have piles of debris are still laying at the edge of their properties.

C osmos has a terrific interview in its latest issue with Michael Mann, the professor of atmospheric science at Penn State who has been a winter soldier in the climate battles ever since inventing the "hockey stick" graph that Al Gore made famous in An Inconvenient Truth.

KANSAS CITY, Mo. - The Friday snow in the metro is impacting restaurants in the downtown area. "I've been tired, I was tired before Christmas came," said Valerie Soil. It is safe to say, some are starting to get winter fatigue this season. "Its a wet mess, a wet mess," said Soil.

Today wasn't just snow. Also ice and freezing rain. There is no "blame" to be had. Sorry.

Another legacy of sly city.

You can blame whoever you won. Blame frosty the snow man. But what does that really change? NOTHING. The more productive thing to do would be to vote for candidates who want to see clean and good streets like we have with the streetcar. Everything else is just politics.

Perfect night to stay in, sip on some whiskey, and slay on Fortnite. Tried APEX, but its meh to me.

hey even oak grove had it's problems.

Call the pope! There’s been a miracle!! My street was plowed!!

I’m still staying in though!

Total B.S., You're more likely to see a snow Yeti than a snow plow in KCMO. I think there's only 3 of them and 2 are always in the shop.

I don't understand why Kansas City doesn't pre-treat street with chemicals and calcium carbonate that other Midwestern cities do.

If we can afford a freakin' streetcar, surely we have a few hundred thousand to stash away for snow/ice removal and treatment, and no, salt doesn't cut it.

I travel to just about any other Midwestern city during snow and it's much, much easier to get around than here. It's a disaster.

TKC keeps the free speech fountain flowing in KC, despite the evil efforts of "Frosty" and "Farm-Boy"!!!

We got about 5 inches, slow down and don't drive like any idiot. I'm driving a Grand Marquis with the rear wheel. It snowed, it's KC, no big deal.

8:09 my street wasn’t plowed by the city crews, it was a subcontractor who totally blew off last weekends storm, it is a miracle that he showed up this time though.

Blame Gary Lezak. He said he wanted to get 9 inches.

Because the constant whine of people unable to better their lives, the steady hum of racism and the massive drone of stupidity drowns out anything else?

This is on slie. He’s the mayor we have been overdue for a rough winter,and the city was not prepared. This only covers the horrendous roads in this city...let’s see what happens after this clears out...slie you were not ready..

803, this is all tkc can do now. Set out the bait to lure the invalids and shut-ins out to the comments between episodes of Steve Wilkos.

It's a sad turn from years ago when it wasn't just a whine fest.

10:38 you took the bait dipshit! Hahahahaha!

Old Man WItherspoon sipping a coffee down at the Hy-Vee said...

In my day we called this "winter" and didn't soil our breeches at the first sight of it.

1:54 in your day the city took care of its responsibilities, you know, street repair, snow removal, trash pickup, the basic things that are expected of the city, why? Because they did what they where elected and supposed to do, today these assholes don’t care about doing their jobs, just getting kick backs from developers. It’s no longer for the people, just what can I do for my self.

And they expect you to be grateful when they ignore their duties to the citizens.

Yeah When they gonna clean the bike lanes?

I blame frosty the mayor!