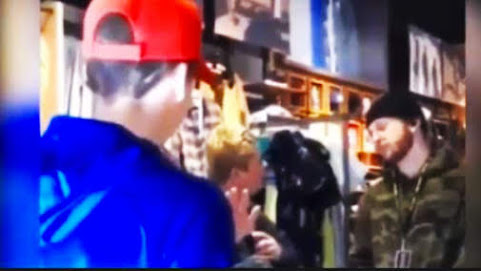 Special thanks to TKC Readers for sending this one over before they took to the street in a protest against a dying mall.

Brief aside . . . This one "feels" sketchy but we'll go ahead give it a mention because nobody was hurt and everybody seemed better off at the conclusion of the tale given that a Vans store job is a one way ticket to nowhere.

A Vans store employee at the Oak Park Mall in Overland Park, Kansas was terminated after saying “f*ck you” to a 14-year-old customer who wore a red MAGA hat into the store.

The incident occurred on Sunday and its aftermath was recorded and posted to social media. In a video, the teenager’s mother confronts the employee, then takes the issue up with the store manager.

Good for the store. Time to clean up Oak Park for real.

Make America Great Again. How do you argue with that ?
Why can't we all back our president ? We all put up with the Bushes and Odummy, we finally have a non politician as our leader, back him we will not get another.


Excellent, no one did anything like that when people were wearing Obama shirts in the stores at Town Center. It's about time liberals grow up and stop acting and supporting thugs that want to put us all in a totalitarian way of life.

I agree Oak Park Mall needs to be cleaned up as well as the rest of OP.

Progressives are so toxic. The way those catholic school boys were treated at the lincoln memorial because of their MAGA hats. The Jussie Smollett MAGA hat hoax in Chicago.

On and on all over the country if you wear a MAGA hat you face being physically assaulted by #Metoo types. These are the same progressives that want you to believe there are nazis everywhere, and gay people are being attacked in record numbers. When the reality is the oppposite, trump supporters are the ones being attacked.

Saw this on Daily Mail Bloke

YET ANOTHER EXAMPLE OF THE INTOLERANT LEFT!!!!!!!!

So-called Progressives are the most HYPOCRITICAL people.

When Hillary called half of Americans DEPLORABLES,
When Obama called them CLINGERS TO BIBLES and GUNS,
When the 2020 Democrat candidates call them WHITE HETEROSEXUAL SUPREMACISTS,

I know that 14 year old kid was every bit as guilty as those deplorable Covington Kids, because I heard it on Bill Mahr.

I am so sick of you white supremist scum keeping us down, beating us, pouring bleach on us and trying to lynch us!

What a joke this seems like a publicity stunt to me just shows you that the MAGA boys are becoming snowflakes just like their liberal counterparts.

I agree with the statement that "everybody comes out better for this."

Vans fires some guy who never really works there, MAGA gets their imaginary pound of Flesh and the people get to be entertained by a culture War piece of propaganda that never really existed in real life.

Even better it shows a republican white mom getting into the mix. I know this is fake because no activist mom like that would ever let their idiot kid leave the house in a baseball cap that just invites trouble.

To quote our great leader this is fake news and it's more than just sketchy it's a false narrative just as bad as that fancy guy from that TV show who also is facing some fakery accusations.

What are you from DNC headquarters?

Dems are the new KKK

Pubs seem awful triggered by this. What's the matter snowflakes, do words hurt? Bickering up butter cups, worse days are ahead for you. Individual One is going down.

Vans just became a lot cooler to me. Going to go there and get some new kicks. Sorry MAGA bitches. The party is OVER.

Fake to be sure a MAGA all white theatrical production. You're telling me some kid getting yelled at in a shop makes you mad? Get a life!

Loaner, you truly are a liberal tool. Shame on you for your stupid reasoning and ignorance about political speech. You deserve to be completely ignored and your thoughts about this incident are disgusting at best. Shame on you!

The Hitler youth in training would have been harassed over and over again in the mall for wearing that stupid hat before he made it to the store. This is just some play acting and Vans is in on it. Really sad this is even making the "news" but just seems to be another false story so we don't ask about what's really happening in our nation.

Don't judge a book by its cover; except in this case.

Maybe he shouldn't have cussed at the kids but there's nothing wrong with yelling at somebody to get out of your store. EVERYONE has the right to refuse service. I thought Republicans believed in the same thing? If you agree with this one then we'll all be making gay cakes when Trump is voted out.

He's not going to make it to reelection at this point. Impeachment time is coming soon. Sorry MAGA beetches.

Liberal snow flakes refuse service in their little, empty corporate shop. That's not too much of a stretch. Nobody buys vans anyway.

Im sure they will look cool with your dockers.

So some shitbag who is making 9 bucks an hour has the right to keep his employer from making a profit?

You know, I wore a hat that said “Obama Suxks” and I don’t remember any liberal fag saying a word to me. They probably figured it wasn’t worth getting a beat down.

I don't care if it's a MAGA hat, a Che T-shirt or some brutha wearing one of those black Malcolm "X" ballcaps, adult employees who want to keep their jobs don't cuss out their customers in front of their parents no matter who they are or what they're wearing. You sell them shit, take their money and move them out the door.

He probably hated his job anyway. Bet he starts at Hot Topic by Wednesday.

The kid had a right to wear his hat. This is the essence of free speech. Shame on that guy!

cussing at 120lb kid, you're tough. Cuss at me and you'll get broken in half.

Will wear my MAGA hat in there today and see what they have to say.

I kept thinking the grainy footage was a clip from Mall Rats.

Imagine working a retail job and yelling at a 14 year old kid. God damn that employee is a loser

What a little snitch. Grow some cojones and deal with it if you are going to wear that hat, but no go cry to mommy and get on the news...

I caught a MAGA geezer wearing his hat trying to get in the mall yesterday. He never made it in!