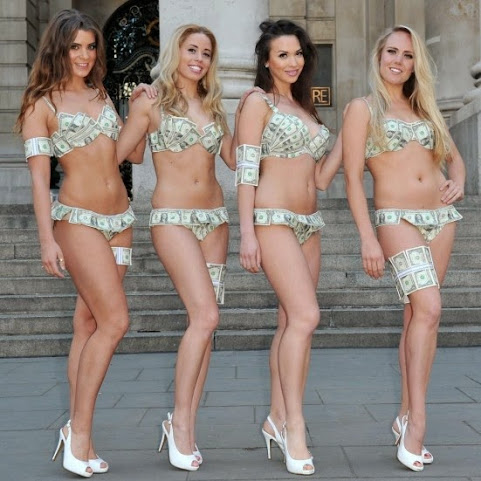 A money move and a look at the resistance from our friends on the nicer side of the State Line. Check this "enthusiastic" note from a friend of the blog:

"Are you kidding me?" Shawnee cannot manage what they have, and now they want to STEAL private property (that has been used similarly for a long time)--through a private taking--eminent domain?

This is sneaky. It's not right. I asked that it be tabled...till after the May 21 Mail in Ballot vote. Crickets, no response. No quotes, no comments from the council which debated this secretly in the back room.

Shawnee Council has lost their mind. Gotten greedy. Willing to steal private property, when other land is available. This is outrageous greed and manipulation. Right up there with the famous Keto/little pink house case re eminent domain that went to the Supreme Court.

And where might Shawnee GET the millions of dollars to PAY for taking private land? The city does not have cash for this. How broke? So broke, they are hoping to raise our property tax mill levy by 52% forever. Without saying so in the ballot wording. IF they only raise it 2.919 mills, which they refuse to commit to or explain on the May 21 Mail-in ballot for the $54 million Shawnee Community Center...which they call $38 million, since they refuse to mention 20 years of interest.

One guess. In July, if the SCC passes on May 21, Shawnee Council reserves the right to set the mill levy at ANY rate during the budget hearings. Emboldened after the great Shawnee Swindle, they would be forced to tack on several million more tax dollars!

To buy a park official a new and better garage/warehouse for his mowing toys. AND kick a good business out of Shawnee.

I'm down with whatever Tracy says. She has a good head on her shoulders. Anything that makes her this mad has got to be wrong.

While she does give off a Weird Cat Lady vibe from time to time, I think we ought not make fun of her for informing herself and holding opinions about local matters. Most can't be bothered to put their phones down or get off the couch. She is civic minded. To stay dialed in on local fiscal matters ... not easy.
Fifteen years ago (or maybe more...) Merriam eminent domain a used car dealer and the public purpose was... another car dealer.thanks,
Radish

Tracy makes good points and as always the clueless haters respond. Tracy is trying to let the residents of Shawnee know what is really going on and Tony is lending a hand because he can see as anyone else who looks at the issue for 30 seconds is that the city of Shawnee is trying to pull a fast one. As with most cities the desire to build fancy shrines so Mayors and council members all get their names on a plaque inside the front door to remind all of how bad they fleeced the taxpayers. When a cities infrastructure isn't up to par then tax dollars have no business being wasted on frivolous things such as community centers. Besides I thought that was what churches were for and should be since they get all these tax breaks to begin with. Community centers are a dime a dozen in Johnson County and this is typical monkey see monkey do politics. The old attitude of well if they have one we need one is unnecessary wasteful spending.

The city already has a civic center and adding another civic type building with indoor playgrounds and other silly feel good things type building costing millions of dollars is a rather ridiculous expenditure. And you have your head totally stuck in the sand if you think the costs will be what the city says it will be because these projects always incur millions of dollars in over costs.

Tracy is right the governing body of Shawnee has lost their mind and lost touch with reality. Next election the voters need to clean house. Shawnee sure isn't Leawood and the city leaders need to stop trying to act like it.

human evolution is a myth.

Lots of us are in favor of a new community center Tracy, so shut your flapping yap.

Tracy nails it as usual!

Jesus Christ stupid dave, stop talking!!! You make no fucking sense. Whatever that garbled mess of shit was, I have no clue! I think you just made the case for the communist center!

Yes preach it Tracy and Dave.

I'm glad I dont live in that garbage city.

Dave, what clueless haters are you talking about? The two people who posted before you said positive things about Tracy. Dave, you are a stupid cocksucker, you dumb son of a bitch.

@3:40 it appears Tony deleted your earlier comments. But missed 3:19

Tracy is definitely on the right track and the residents of Shawnee should be applauding her for her work in trying to keep every one informed.
The actions of the council sure does not pass the smell test. Makes one think the council has taken lessons from KCMO.
The members need to be voted out and the people should not keep reelecting them the way KCMO keeps reelecting the same ones.

The sexy, sensuous and always mysteriously alluring Tracy FLAT OUT ROCKS!!! Stay on their ass Tracy.

So Shawnee wants to babysit juvenile delinquent hood rats from KCK. They will be bringing them down there by the van load.

Please shut up Dave. Nobody cares what you think.

So she's against the government stealing private property.

Does that include Trump's fake national emergency and imminent domain use to seize private land to build a wall?

Maybe a little bit of difference between a community center and a wall necessary for our national security, unless you’re too much of a faggot to realize it.

The fuckin wind, blows around Tracy.

If she says Shawnee is getting fucked----THEY ARE!

Shawnee isn’t getting fucked. Actually, they are fucking themselves.

Are they still putting in the free juvenile day care complex ?