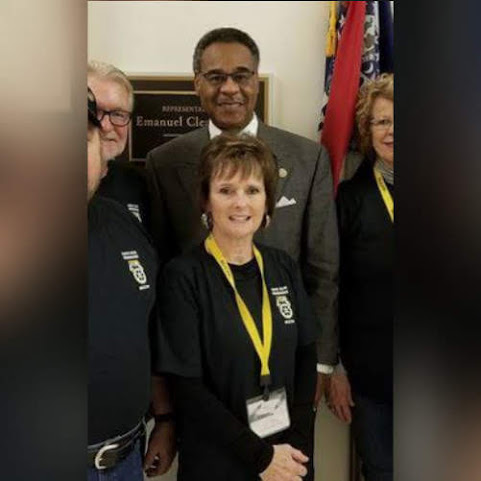 E.C. From D.C. - Retirees Can No Longer Wait

This week, I was proud to sign on to legislation that will help millions of retirees who are concerned about their hard earned pensions, the Butch Lewis Act, H.R. 397.

The Butch Lewis Act, also known as the Rehabilitation for Multiemployer Pensions Act, would create a new office within the U.S. Treasury Department called the Pension Rehabilitation Administration (PRA). The PRA would allow pension plans to borrow the money they need to remain solvent and continue providing retirement security for retirees and workers for decades to come.

This week, the House Committee on Ways and Means held a hearing to shine a light on the multi-employer pension crisis that has already roiled hundreds of thousands of workers across the Midwest. People who have saved all of their working lives for this moment of retirement have been told that there is not enough to fund their pensions in the coming years. Over 400,000 people who have vested millions of dollars into their retirement with the Central States Pension Fund (CSPF) have been told that the fund will become insolvent within 5-10 years if their benefits are not drastically cut, some as much as 60%. This is one of the largest multi-employer pension funds in the United States.

A brave Kansas Citian, testified before the U.S. House Committee on Ways and Means this week. Cindy McDaniel, Co-director of the Missouri-Kansas City Committee to Protect Pensions, talked about ways to improve the security of working Americans’ retirement and most importantly talked about what these cuts would mean for her family and hundreds of thousands of families across the country.

For years now, workers and retirees within the CSPF have been dealing with the uncertainty of whether their hard-earned pension will be there in the years to come. I have been working diligently to help CSPF retirees and active workers, holding a town hall in 2016 in my district of Kansas City, Missouri, in which nearly a thousand people attended to hear U.S. Treasury’s Ken Feinberg speak to this issue. I also called for an investigation after hundreds of retirees and workers contacted my office regarding the stability of the CSPF. It is imperative that we find solutions to the pension crisis facing the CSPF and why I have cosponsored H.R. 397.

According to the Pension Rights Center, 150 to 200 plans are projected to run out of money within 10-20 years. A study from the U.S. Government Accountability Office (GAO), requested by myself and other Members of Congress, released last summer revealed this is due to several factors, including changes in the economy that have resulted in many plans having more retirees than active workers, company bankruptcies and withdrawals from plans, and investment losses stemming from the 2001 and 2008 stock market downturns.

These families spent years of their lives working to put money away with the presumption that it would be there for them when they retire or can no longer work, only to have the rug pulled out from underneath them. That is unacceptable. It is past time to pass the Butch Lewis Act; these retirees cannot wait any longer.

8:56 is such a prophet! The evil GOP hitler Russia nazi trump orange Cheeto has stolen your pension!

How is it that a member of Congress and a career politician like cleaver acts like he cares so much when they raped the social security program?

Cleaver is part of the problem.

Ummm Get your facts straight Uranium one Hillary supporters, it's the Democrats who spent all of the money instead of putting it aside! Like giving all of the money for Obama's Iran deal and the Palestinians!!

Progressives and Government Employee Unions are so fuckin out of control it's insane. Huge 6 figure pay outs to city workers, state workers and Feds are cripling state economies from New York, to California. In Illinois the dam is about to break.

More government is NEVER the answer.

Remember when Alexandria Occasional Cortes wants the government to take over EVERYTHING and build bridges across the ocean because planes use fossil fuels, out law cows and pay people "unwilling" to work, that this is the result. Progressives are pie in the sky idiots who see the economy as a zero sum enterprise and think that dividing Americans in class and racial conflicts will keep them in power long enough to destroy the country.

They are right. They are winning with the help of the ENEMY OF THE AMERICAN PEOPLE - the Main Stream Media.

Cleaver's efforts to support pensions are an effort to maintain the diaphanous, Democrat dialogue which shields the criminals in power who allocated Yuge sums of our economy to government workers who all vote Democrat. Rinse, wash, repeat.

Federal Government workers receive, with benefits - an average of $122,000.00 per year. In the private sector, the average worker receives $62,000.00 per year. It is a racket where the Vampires in Washington and in your local home town, suck the blood out of your family, future and existence until you die in order to support the economies of cronies in office and insiders who want you living in Kenau Reeves Matrix, cradle to grave, hooked up to tubes providing sinecure, sustenance and Socialism for Progressive Pecksniffs.

Congress better listen to all the Tinfoil MAGA Hat wearers when they say
"Them Damn Socialists better keep their hands off my Social Security and Medicare"!

I hear the kcmo FD has great overtime benefits. Should I apply there or at KC PD? Which one has the more bloated union that I can milk?

Remember, the assholes in Congress, didn't actually have to USE Obama Care.

That should tell us all something.

Once again, it's good to contrast what someone says and what they actually did when they had a chance.
What did Cleaver do to shore up the KCMO pension fund, which is underfunded, when he was mayor?
Talk is cheap.
Especially from people who do little but blabbering.

In short the taxpayers will be bailing out the failing public employee pension funds.

I don't know where you all get the idea that this is about public employee pensions. The way I read it, the fund that Cleaver wants taxpayers to bail out is the Teamsters' Central States pension fund. Cleaver wants to set up a government agency to "loan*" money to the Teamsters' pension fund so it can continue to pay benefits at 100%, rather than take a haircut on payouts. So, PRIVATE FUND getting bailed out with PUBLIC MONEY. Terrible idea!

*How the fund could ever generate enough to pay back the "loan" is not and never will be explained. But then, Cleaver has never paid a lot of attention to paying off loans, and he's not about to start doing so now.

Can't feel too sorry for these pensioners. They voted in the union leaders who looted the pensions to funnel money to the mob. Now they want the taxpayers to bail them out.

No way this becomes law.
The implications are too huge.

The average regular city employee not fire or police gets about $15000 a year retirement and has to wait for social security. police and fire get $48,000 grand a year and some of their medical paid, plus they don’t pay social security so they put that money into outside investments and can start drawing on that as soon as they retire. I know people in fire and police living on a measley $9000 grand a month. Poor bastards. The regular city pension was fine because of so little being paid out until it got raided by police and fire which is still behind.

I hear our fire pension is behind and the city has missed ten years or so in payments..we are screwed looking to go somewhere else

know people in fire and police living on a measley $9000 grand a month. Poor bastards.


Plus here in City Kansas Mo when they pay all the taxes the money goes right back into their pockets.

Does they have pensions down at the car wash?