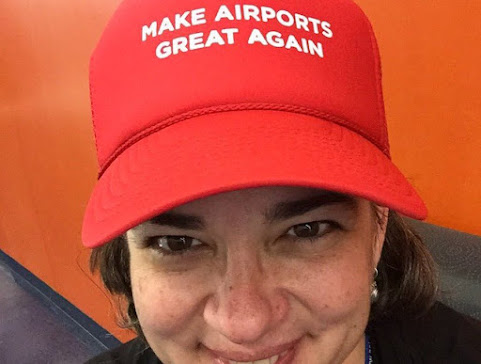 Most of the news about the airport is made up garbage pushed by desperate politicos wanting to become mayor.

COUNCIL LADY JOLIE JUSTUS TOUTING A "NEW KANSAS CITY AIRPORT DEAL WITH THE AIRLINES" WAS MYTH BUSTED BY HER FRIENDS ON THE COUNCIL!!!

Fact is: THERE IS NO DEAL. The airlines are simply coming back to Council giving them a budget.

NEWSIES TRIED TO CONFIRM THE COUNCIL LADY JOLIE JUSTUS "DEAL" AND INSTEAD LEARNED ABOUT THE $1.5 BILLION BUDGET THAT THREATENS THE CURRENT EDGEMOOR DESIGN!!!

Decent news outlets updated their story and threw just a bit of salt on the Jolie Justus for Mayor campaign blast.

KMBC: Airlines at KCI agree to deal for new airport terminal, but at lower cost

And now things get even more fun, here's the hot take from an insider on this sordid state of affairs and the implications of how the new KCI has already started to crash & burn:

Is the New KCI deal about to get real?

This is where the new KCI deal is about to get real. According to several reports, the airlines have finally set a maximum price they will pay at 1.5 billion dollars. This is allegedly a “hard” figure, meaning they really won’t pay more than that. If that’s true, the big question is whether Edgemoor is willing to sign a deal with 1.5 billion as a “hard” Guaranteed Maximum Price (GMP).

Builders like Edgemoor are extremely reluctant to agree to a truly “hard” GMP because large construction projects like this are notorious for cost overruns. If the builder agrees to a fixed price and costs take off, it could face staggering losses on a deal of this size. That’s why the construction contract with Edgemoor, pending approval by City Council, has this clause . . .

According to this deal, Edgemoor agrees to a GMP of 1.48 billion “except as modified by the terms of this Agreement.” And there are lots of terms in this agreement that allow the final cost to rise well above 1.48 billion. In fact, the agreement allows the GMP to go up construction advances. If KCI turns out to be like the Edgemoor cost overruns documented by Councilman Wagner at Sea-Tac airport (Seattle), costs could go way up.

TRANSLATION: EDGEMOOR CAN'T BUILD THE NEW KANSAS CITY AIRPORT FOR $1.5-BILLION AND THEY'RE NOT GOING TO PAY THE DIFFERENCE!!!

The reality is that the Council Lady Jolie now owns every penny of this new airport hot mess in a campaign stunt that blew up in her face less than 20 minutes after her first tweet on the topic.

Moreover, Kansas City taxpayers FINALLY seem to be learning that they'll be stuck with the EPIC $4-BILLION PRICE TAG for the new airport if elected leaders don't soon change course and veer away from so much dangerous hype.

Jolie as the airport candidate, you have to give her credit. She is making a bold camapign move. That's probably why she has been getting so many donations lately.

Actually, you have to give credit to the airlines here, at least they were willing to stick to a budget. You can't trust KC politicians to do something revolutionary like that.

I love a clown show. Stick to sitting on fake crime committees, Jolie.

WTF is she doing?

Actually, I support Jolie and think she would be a fine mayor. But she put herself in the position of having to deliver this airport deal BEFORE she gets elected. That's a big mistake.

Now Jolie is the New KCI airport candidate and not a real leader of our LGBT and progressive community.

That's just bad strategy and I'm sad that Jolie is listening to it.

Angela-Why is Jolie's sexual preference an issue? Don't you think our next mayor should be the most qualified to do the job AND represent taxpayers?

Regardless of what Jolie does or does not do in her private life, she's neither the most qualified nor does she represent taxpayers.


What you are is a stupid person that is leading a filthy lifestyle. You are the reason why the world is so screwed up because you are so hardcore that you turn to sex with the same gender and that's sick, instead of getting the help you desperately need. I have come to the place where I'm so sick of you idiots. Keep trying to push your dirty agenda on us and you will see backlash you have never seen before.

What kind of an idiot would want someone for mayor that only is interested in the Queer lifestyle and not the growth or well being of a city???? YOU, and that's called IGNORANCE!

The airport is such a disaster it's funny to think that Jolie can try to change it with a few tweets about a public meeting where everybody will see that she's lying. She must be getting very desperate.

KCI is canceling flights and a new airport would probably not prevent flight cancellation so therefore a new airport would be no better than KCI.
The airlines are doing what they can to keep from getting stuck paying a huge price from an out of control developer and city government.

kci worked fine during the holidays. I don't understand and jolie won't explain it. Why are we spending more money to build a smaller airport?

What's clear is that if you lie to the public long enough, after a while even you can't tell the difference between the truth and nonsense.
Justus' actual performance over her tenure, both with the laughable nonsense of her "Anti-crime" commission, and especially the endless airport fiasco, should disqualify her from running for or holding any office that has control of taxpayer money ever again.
Her cluelessness and utter lack of concern for the public is astonishing.
And disgusting.

JUSTUS AIRLINES...WE CARRY THE BAGGAGE, YOU'RE ON YOUR OWN!

Exactly @913 “Why are we spending more money to build a smaller airport?”

9:00 #1: Thanks for sharing. I didn't realize they had computers at the nursing home.

The taxpayers will foot the bill. That's the way it always works.

Jolie Justus is NOT a good candidate for mayor. She got into the current mayors back pocket immediately upon arriving in town, she started running for mayor about 20 minutes later, she is all about herself and doesn’t give a crap about anyone or any community. And yes, I voted for her for council because like all gay boys, I drank the lkool aid and listened to those “progressive” leaders of ours in the gay community! She has done NOTHING! She will never get my vote again nor from many of us now that she has shown her true colors, she is just another shady politician who touts her sexuality in order to enamour herself to a community.

Hows our beater gubbermint doing getting our streets cleared and safe today?

2 of the airlines still haven't signed on. Thank you TKC for calling Jolie's big, fat bluff.

Jermaine sounds like he's on that stuff. I thought he was going to start dancing on the table.

The new airport will still be far-away-as-fuck from the city so why bother. Especially if it means more expensive flights for us KC folks who use it (or fewer flying options).

It's a bit dated yes but it's not too bad and could be spruced up. I've never heard complaints about it except for how far away it is.

I hope you d-bags realize this ALL a big distraction so that KC can borrow 90 million without any of the media organizations reporting it.

I want to get in the car. Drive up to KCI. Get on the plane and go. Not sit around playing magic putt putt and sipping on vending machine starbucks, or working on a laptop because the airport is the newest cool public space being underutilized by entrepreneurs so I'm a trendy mover and shaker.

Why couldn't KCI have just been upgraded-remodeled to make a few layover guests here and there for 30 minutes or an hour more comfortable?

"convert our quaint, unique airport into a modern, state of the art travel center designed to streamline convenience and bring billions and billions of $ to the region"


LOL some of those tweets are hilarious.

So her office is a bar?

Yes If drunk sober individuals can be effectively paralyzed by the politically motivated decisions they make.

Remodel the easiest to use airport in the nation. Why screw up a good thing? We do not need another dead mall in 5 years with airplanes in the parking lot instead of shell casings.

Where do I get my Clay Chastain's, or any other white taxpayer candidate's yard sign, except Jolie's?

Council Lady Jolie is the female version of Sly James and that's not what Kansas City needs running loose in City Hall running the city.

My two council humans are Justus and Shields... I've never felt so alone.

10:14, I have often heard complaints from people whose jobs require them to fly a lot that the airport is too far away. Almost without exception, they live in south Johnson County, Kansas. When I asked why they don't just move closer to the airport, I'd get at best a shrug but no answer. Seems that they all want the airport to come to them rather than vice versa.

11:40, I used to be an eastern Jack guy, and the airport is super far from there. Now that radish is planted in KCK though, it's not too far. I know what u mean about south JoCo people complaints...

KCK, God's Country radish. I'm a SEJack guy and don't mind the 40 min trip to the airport. Gives me the opportunity to stretch the car's legs on the North loop.

^^^^ Miller has never held an elected office. Not once, not ever. Why does he think he's entitled to start at the top.

See you at the new KCI groundbreaking!!!!!!!

There wont be much running from Jolie James.