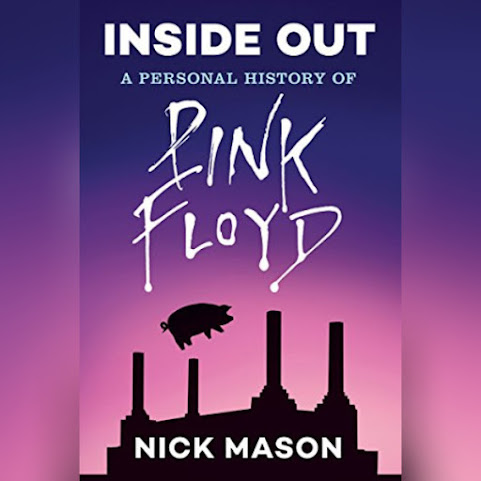 A treat for our overnight readers, book and music review from friend of the blog Super Dave . . .

Super Dave - Nick Mason Inside & Out

Those of you elderly folks like me who were hard core KYYS listeners back in the day as I was myself were probably huge Pink Floyd fans just like I was. No doubt I was a Pink Floyd junkie who was on the phone to Max Floyd as soon as there was a date listed for Pink Floyd doing a concert in Kansas City. Max being the good friend he was at the time would always score some great tickets for me. But anyway back to what this is all about. This story and book review is about Nick Mason who wrote a book covering the group called Inside Out.

Nick Mason is the only drummer Pink Floyd has ever had and the only member of the group that appeared and played on everything they recorded released a book back in 2004 about Pink Floyd covering the beginning to the end, well sort of the end. Nick Is touring this summer but will only be as close as St Louis 3/31/219 with his Saucerful of Secrets tour.

Any fan of Pink Floyd or not will enjoy reading Nick Mason's book, Inside Out. This is Nick Mason's personal memoir of Pink Floyd which was edited by not only David Gilmour, Rick Wright but Roger Waters as well for clarity. This is the best book I have ever read that revolved around a band and trust me I have read a number of them. This book turned out to be all about what I was hoping for and not about what I was afraid it might be about. It explains very well the issues with Syd Barrett and all about putting tours like The Wall, Momentary Lapse of Reason and Division Bell together. After reading this you will better understand what happen with Roger leaving the group.

If you read nothing else this year please read this book and enjoy the pictures in it you won't be sorry that you did. I knew of it years ago and sort of forgot about it because at the time I couldn’t find a copy of it in Kansas City till coming across one a few weeks back.

By the way this isn't a book about crazy parties and binge drinking while destroying hotel rooms. This is a book about some guys who kept very low profiles during their careers and that if you remember anything about them it was you seldom, heard anything about them. Also the copy I read had been updated to cover the years after the book was first published in 2004.

For those of you who don’t know about Pink Floyd it’s time you learned and gave them a listen to. They still hold the record for having an album on the charts for the longest at 942 weeks. That’s something even Elvis couldn’t pull off. Many bands didn’t even last that long. That’s over 16 years of having an album selling well enough that you remain on the top selling charts of Billboard. The Beatles by many are the best ever but they only were a group for 8 years and don’t have an album one lasting on the charts like Pink Floyd did.
##########

Good Call Dave! Been wanting to check this one out and now I have a reason.

Pink, one of the best bands in history. Absolutely agree with Dave. Nice one buddy.

Remember Pink Floyd playing in Berlin after the wall fell down. One of the most historic concerts of the 20th Century. The Beatles never had the chops to do something likethat. Great review Dave.

Pink Floyd does rock and their material holds up. However, I have to wonder if Stupor Dave was one of the handful of Trump supporters that walked out of Roger Waters show at Sprint Center in 2017.

Screens arranged to look like the factory on the Animals cover were lowered above the crowd as they displayed emasculating, mocking images of 45. The photoshopped pictures depicted the sitting POTUS in brightly colored lipstick, a Ku Klux Klan hood, as an actual pig, and wearing a dress. At one point, the dress was removed to reveal a tiny, almost hidden penis. Nearly every time the band called out the line, “Charade! Charade!”, an image of Trump was shown with the word plastered over his face. There was even an inflatable pig drone that flew around the arena with the words “Welcome to the Machine” next to an image of an enraged Trump shouting, “I won!”

As the 11-minuted song closed out, all the screens went black and began displaying some of Trump’s most infamous quotes. Things like, “This is more work than in my previous life. I thought it would be easier,” and, “You know, it really doesn’t matter what the media write as long as you’ve got a young, and beautiful piece of ass,” were shown in succession before the entire darkened stadium was lit up with one, bright-white message: “Fuck Trump.”

They also had to understand that they had been betrayed by Donald Trump and his kind, not by the Mexicans or the Chinese or whoever he was telling them was the enemy. Because they're not the enemy. He is! This guy who is trying to get you to vote for him... is your enemy! This is the guy who is destroying your lives.

He keeps telling you that your jobs are being stolen by the Chinese and the Mexicans, but they're not. They're being stolen by him. It is all part of his shell game, and what they were voting for was a kleptocracy.

Roger should keep his pinko ass in the UK where it belongs. FY

"Money, get away
Get a good job with good pay and you're okay
Money, it's a gas
Grab that cash with both hands and make a stash
New car, caviar, four star daydream
Think I'll buy me a football team
Money, get back
I'm all right Jack keep your hands off of my stack
Money, it's a hit
Don't give me that do goody good bullshit
I'm in the high-fidelity first class traveling set
And I think I need a Lear jet"

Jesus Christ, that was some retarded shit. How long did it take you to read it stupid dave? Did someone have to help you sound out the big words you didn't know? Herp derp.

Roger should keep his pinko ass in the UK.

Good news, Larson! Nobody cares about your geezer dinosaur bands.

4:10 and 4:21 you should learn before you speak about stuff you are ignorant about. Waters isn't a member of Pink Floyd and hasn't been for years he left the group. He is allowed to play the songs as about anyone else can and many tribute bands do but it does not make him PinK Floyd. Waters left Pink Floyd in 1985 and fought a lawsuit over the band’s name with the rest of the group, which he lost. Waters is a jerk as one can see and many went to this local show hoping to hear some good Floyd stuff not some political crap from a jerk who isn't even an American citizen. The prick is here on a visa. Thankfully he has to pay butt loads of taxes.

2:05, you ignorant slut. Apparently, you only lyrics you embrace are "we don't need no education". There is no Pink Floyd without the genius of Roger Waters.

Gee, he's only an original member and over 20 years developed the album concepts, wrote the vast majority of the lyrics, and a large share of the music. He is not a glorified cover artist. It's his work.

Since you seem to be confused, one more clarification - The Wall isn't a feelgood diddy about a barrier on America's southern border.

BTW, the show at Sprint Center had lots of classic material and was awesome.

Get a grip folks!! We have had the best of both worlds for a long time.

Roger Waters was the main lyricist and a force of the band and Gilmour, Wright and Mason were the sound of Pink Floyd!! Let’s not forget it was Roger’s decision to leave the band publicly in 1985 and Gilmour and Mason decided to continue with the band,there is no doubt that Roger’s lyrics and played a role in the band's success from Meddle to The Wall, but the input from Gilmour, Mason and Wright were just as important, granted Wright did not contribute much on Animals or The Wall. The combination of all 4 members WERE the sound of Pink Floyd. Sure The Final Cut was a Water’s solo album, sure A Momentary Lapse Of Reason was a Gilmour solo album, but we should be glad to have them both!

I say this to you all, be thankful of the body of work created by the band over the last 50 years. I am eternally grateful to Syd Barrett, Roger Waters, David Gilmour, Richard Wright & Nick Mason with providing me with the best music which has been with me through my life’s journey and all the memories of Floyd concerts and solo tours over the years.

But 4:36, your conclusory remarks are disappointing. Without Gilmour, Wright and Mason, there is "NO PINK FLOYD". Roger cannot carry that on his shoulders no matter how great a writer he was. Without Gilmore, Wright and Mason, Waters is another Bob Dylan. Fact is, Gilmour and Wright made Pink Floyd sound like Pink Floyd. Everything Roger did alone, after the Wall sounded like a great band trying to sound like Pink Floyd. But it still feels like a cover band. Roger is not Mr.Pink Floyd by himself alone.

A good idea in itself isn’t enough to create good music. Music is, after all, about music. Not words or creative ideas in itself. And that's the direction, a Waters dominant Floyd, was heading. Dark, bleak and depressive.The truth is, a lot of other people in and around the band had a lot more influence on these records, than Waters wants us to believe. Bob Ezrin had a lot of creative input on the Wall. Gilmour and Wright shaped the tunes. Together they added texture and extended musical pieces to make it fit together as a whole piece.