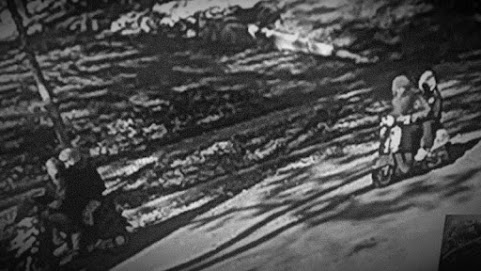 The notorious "Scooter Gang" has returned to the streets of the Brookside, Waldo and Southland area to steal everything in sight.

This diverse collection of miscreants, crooks, youngster thugs in training first gained notoriety back in 2017. Now they're all grown up and continue their small time heists from cars, garages and anything that's not nailed down. Neighbors fear they'll soon move up to assault as one lady reports she was followed by the gang as she quickly maneuvered through the snow to her car.

Most of the reports this weekend simply confirm petty open door car property thefts and the gang brazenly stopping and pulling car doors block by block as if they owned the streets.

THE KANSAS CITY SCOOTER GANG RETURNS AND POLICE URGE NEIGHBORS TO CALL AUTHORITIES RATHER THAN FORCE A CONFRONTATION!!!

Thing of it is, they're on scooters and don't seem formidable but they're tougher than they look and longtime residents might be overestimating their willingness to engage an organized mob of ruffians riding cheap bikes in the snow.

Check the TIPS hotline for those who want to stay anonymous in hopes police can crack down on the rolling young adult mob after about two years running.

I guess they deserve credit for being able to navigate the side streets. Most of them are still ice.

Mr. Glock will take care of them. I garauntee it.

They are just democrat socialists that believe in that everyones property needs to be redistributed. Shouldn't democrat Brookside and Waldo believe in this?

I am surprised that the KCMO police even care. They usually just tell you to come to the station and file a police report for your insurance. We had the Leawood police knock on our door to see if we had some footage on our security cameras of a car break in at a neighbor's house, but property crimes on KCMO residents are just a part of everyday life in the big city.

Maybe the KCPD needs to use their TRT (Tactical Response Teams) better. Instead of always working out & training for the BIG ONE, they can get out in plain clothes (I know, guys, you'll have to wear clothes that make people mistake you for lowly patrol) and hunt these mistakes down.

Of course, there might be a report involved and you will have to book your own arrest, not just pass it off to a uniform while taking credit.

^^ Excellent post. Also pursuing the scooter gangs would be valuable training in mobile targets in an urban setting.

Wow I see the cliche gang is back too, spreading banality everywhere! Everything in sight, diverse collection, small time heists, not nailed down, quickly maneuvered, simply confirm, thing of it is, tougher than they look, longtime residents, organized gang (as opposed to all the disorganized ones?).

^^^ Wildman returns. You've been posting this shit for years. If it bothered you that much you wouldn't be reading it every morning. That's the real cliche.

Just a warning, take it or leave it, but if you shoot them it's more likely that a homeowner will go to jail. Think about that and then buy better locks.

Johnson County is better than you said...

This shizz wouldn't fly in leawood.

Watch it, some hood rats, particularly females are excellent shots.

What do they look like so we can watch out for them.

Kids (thugs) on scooters with their hoods up. Punks on the back do the dirty work.

Time to tune up the Mossberg before spring and the warm weather starts apparently.

8:34 has some inside scoop so we need to hear more from him/her.

CORRECTION: HEADLINE SHOULD HAVE READ

THE KANSAS CITY SCOOTER GANG RETURNS AND CITIZENS URGE NEIGHBORS TO SHOOT THE CRIMINALS RATHER THAN FORCE A CONFRONTATION!!!

Unfortunately, men in Brookside are nutless pussies and wouldn’t dream of owning guns. They don’t even care when their wives go out and get fucked.

Wonder how the progressive brookside queers feel about this threat?

QUIT PARKING ON THE STREET! yall have driveways use them

KCPD will never catch them.

This is sorta true. I’m sorry innnocent people are getting burglarized but the guys in Brookside and Waldo do seem to be largely gay or metrosexual that would never own or use a gun.

Living in KCMO is now like a maximum security prison where you have to look over your shoulder constantly.

Pretend smiling to be hip and frosty is not required but may help.

Quit locking your house yall have guns use them legally