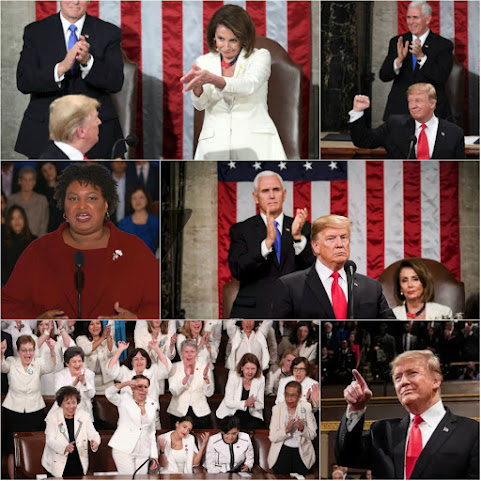 As promised, we read through reader comments last night and picked out some of the best.

Kansas City is just as divided as everyone else about the speech and the fight ahead whilst critics tuned out Prez Trump and supporters ignored the growing momentum of his opposition.

Here are the highlights of our conversation . . .

"President Trump gave an EXCELLENT speech! Shades of Ronald Reagan. I see Trump solidifying his base for 2020, and making it very difficult for any Democrat contender to gather a mass groundswell. Democrats are repeating what Republicans did in the 2016 race for the nomination, when something like 16-19 candidates entered the race and allowed newcomer Trump to suck all the oxygen off the stage."

"Glad Trump made it through before passing out. It took him nearly 90 minutes to slur his way through a half hour speech."

"Trump was right about one thing. The record low unemployment for women.

"Democrats all had a big laugh and shared high fives at Trump's expense on that line. Trump didn't realize how important he was in directly creating new jobs for 117 women in Congress.

"He should probably fire his speechwriter."

"Partisan politics is about the only place people can LOSE and still be 'rising stars'."

"As long as AOC is going full bore Socialist... no chance of Trump losing 2020."

A few more links on the topic:

Fox News: Ocasio-Cortez says Trump 'scared' after he vows America will 'never be a socialist country'

UST: Nancy Pelosi clapped at Trump during State of the Union. The memes quickly followed

Biz Insider: The most powerful moment at the State of the Union was a win for Democrats that Trump had no control over

CNN: Trump's call for compromise is only on his own terms

WaPo: Democrats kept throwing shade at Trump during the State of the Union

Vox: Why Trump spent so much time criticizing abortion during the State of the Union