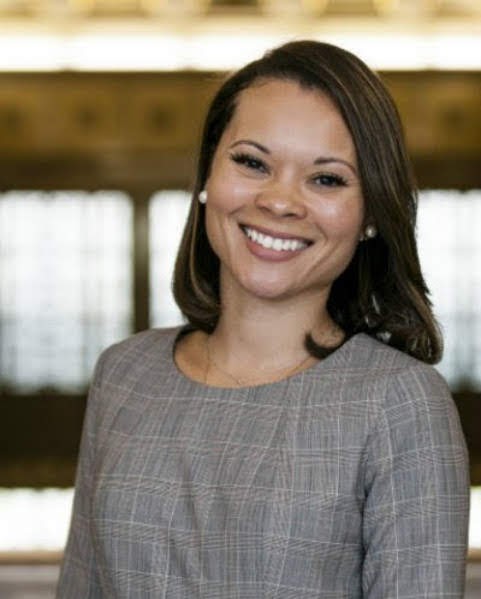 It's Black History Month so The Pitch seemed desperate to search for somebody, anybody within their contacts who isn't a musician or a cook . . . In their paltry 42 page issue, all they could come up with is high praise for a temperamental East side socialite who is impressive in every other respect but her political résumé which is, sadly, her vocation for the moment.

The Pitch basically repackaged some of the stories TKC has shared regarding the director of policy for Mayor Sly James. Unfortunately, for readers who deserve relevant information in the so-called "journalism" pushed forth by Kansas City publications, they made only brief mention of THE SMACKDOWN McClain Bryant Macklin received last year in a low-rent bid for the MCC Board of Trustees gearing up for a potential Council bid. The defeat sidetracked her political assent and proved that Mayor Sly's celebrity endorsement doesn't count for much without the cash of his developer backers.

Still, the article shares a great fantasy on the topic of an urban core political legacy powered more by progressive hope and hype than election prowess. Checkit: 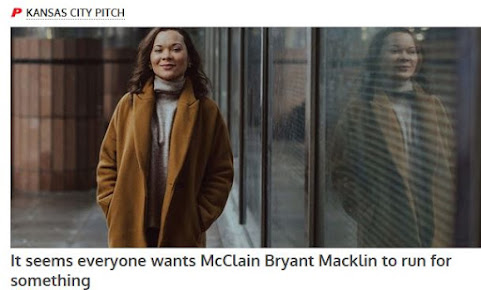 Laugh all you want chuckle heads, you're looking at a future leader of KC for the next 30 years while you guys just sit around getting older and dying off on your keyboards.

Sly's endorsement is poison and this is a member of the team that came up with the pre-k sales tax. NO THANKS. Glad she is staying home for this election. The people who want her to run for something only represent a very small segment of the voting public.

Bow Tie and Clown Suit, zero real knowledge about managing a city and it's budget and your in the running.

Career criticism from TKC? Now THAT is high comedy my friend. She makes six figures and city hall and then some. Not just some basement blogger.

Never heard of her, I’m serious

Must be desperate for attention I guess after having her nose up sLIE’s ass for so long and now that he’s a nobody she’s seeking attention, after all, that’s what the kartrashians do right!

But I would rather have my tax dollars spent on somebody who can fix all these damn potholes.

Her property tax is overdue-late.

Narcissists will never admit guilt. They are fluent in lies, excuses and bullshit. They will deny everything, shift blame and then try to cover up with more lies. Never expect truth from a narcissist. They are pathologically incapable of truth especially if truth threatens their fantasy.

This probably describes many at city hall and many in MSM.

The Pitch has probably figured out it better beat the Sly James drum if it wants to pay the bills.

I'm not "everyone". It's a lonely and challenging life but worth it.


Now this girl has done what for this place?


I'm sick and tired of this bogus black history month. Lets get it stopped it's racist and if we had a white history month for all of the things white people have done we would be crucified "as we are already." Lets get this nonsense stopped NOW!

I can tell you first-hand, the only things McClain is good at is attending meetings, messing around on her phone while in the meeting, and using her gender and race to promote herself.

By everyone, they mean Sly, her and the three people still at the Pitch.

If you are clueless enough to willingly claim your service to Mayor Bullhorn's comedy team, you've already got a hell of a lot of explaining to do to begin with.

How about the history of the murderous black in killa shitty?

Good idea. I like that. Let's call it Black Murderous History Month.

Is her being hired for this position one of Sly's good ole boy under the table deals with Freedom Inc?

Super Dave, it's probably nastier than that - don't forget Cleaver's little popsy who left town to work at another TV station just before every Election, then was back on the air in KC as soon as the votes were in.

Never assume conspiracies on the part of a politician in a situation where an inflated ego and lack of morality is a much more likely answer.

WTF is a "Special Special Assistant for Strategic Initiatives"

How much does this job pay and honestly what the hell does this clown do all day on my tax dollars?

"Special Special" in the job title? Goddamn that has to be one special mofo so why have I or we never heard of this really special special position?

Wow does this town ever need a huge douche to clean this money wasteful bunch of freeloaders out.

She is incredibly ugly.

Juicy Smellit the Hollyweirdo hoaxer had way bigger earnings than her, and he's no magic mullato now, is he?

"The only things McClain is good at is attending meetings, messing around on her phone while in the meeting, and using her gender and race to promote herself."

But I don't want to criticize her only, that description basically fits anyone working in KC government.

Welcome to KCMO... All please stand for swearing in. Repeat after me.

I hereby swear to honor our lord Malfeasance. Intentional conduct that is wrongful or unlawful, especially by officials or public employees. Malfeasance is at a higher level of wrongdoing than nonfeasance (failure to act where there was a duty to act) or misfeasance (conduct that is lawful but inappropriate)... So Help Me God

When you're a white female (or look white)... the sky is the limit.

I wouldn't say she's done nothing. She gave me a boner.

And the next KC Scandle will be - Sly on live TV saying " I did not have sexual relations with that McClain Bryant woman, I couldnt possibley have the time as I have been working day and night to fix the Kansas City Streets" and then he goes to say - "oh damn gotta go pick her up, she just texted me claiming she has a flat tire after driving down Ward Parkway to my lair" Shit!!

Sly is divorced. He is a bachelor. Wife probably saw his other side during and after the election. I dont know who would want to date him now. He should have stayed with his white wife. He is damaged goods, old, super obese. Nope. Not high on the takers list. Success as a politician isnt going to be enough. He is only mediocre as a lawyer.