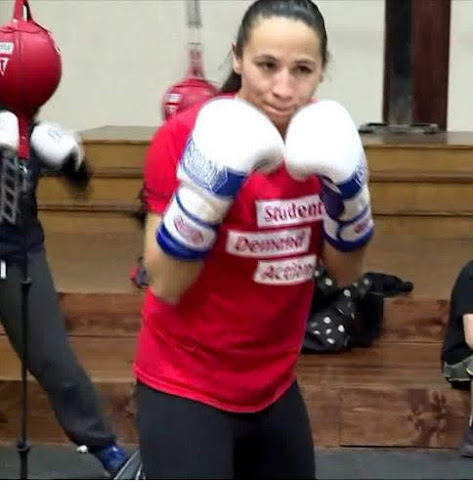 In an era of image and style over substance and policy debate . . . The Kansas GOP will be forced to think creatively if they want to challenge one of the most captivating politicos in the nation. A bunch of angry, hate-filled Internets ranting isn't going to make the difference in opposing this Democratic Party rising star.

While there, Davids hopped in the ring for an about 10 minute sparring session with former HBO and Showtime lightweight boxer Lalo Robles.

"I was a little bit surprised that she knows how to throw punches. She hits pretty hard, too," said Robles, who now coaches at the facility.

Davids is a former MMA fighter, who tried out for the Ultimate Fighter in 2014. She visited with some of the approximately 160 young boxers the gym has attracted in just five weeks since it opened.

Sorry T, JoCo doesn't know anything but the keyboard warrior.

She's supposed to be gubberning not boxing.

Who’s paying for her flight back and forth, hotel and food so she can box with the police? Isn’t she supposed to be getting something done back in Washington

Mommy! Buy me another coffeeshop!

@9:14Am The same people paying for Trump's trips to Mar A Lago every weekend. You! Do you have a problem with that? Because you didn't mention it in your post.

He hasn't been to Mar A Lago every weekend moron. Get some treatment for your delusions and hallucinations.


Trump has very rarely been to Mar A Lago not even for Christmas when the rest of the dirty democrats were in HI and other places.

Nice try though.....I think you may have mistaken Trump for Obama and his lazy golf ball ass.

Morons everyone of you liberals.

Sharice eats a lot of pussy.

Stay classy Johnson County your section 8 rep is on the job.

Evidently Sharice does not realize she is supposed to be in Washington DC doing the job she was elected to do.

@9:56 & 9:53AM: Been in office 762 days, been to Trump properties 226, days at other Golf properties: 171. He visited his golf courses 150 times his first year in office and 77 times his second year. So over half his time in office he's been playing golf. More proof that none of you Trumpkins are connected to reality in the least. He has played more golf already than Obama's whole tenure in office. Get some help for your hallucinations. Morons everyone of you Trumpkins.

10:49 Nobody is beating Woodrow Wilson for most rounds of golf played, there is a difference between “visiting” and actually playing golf, you quote visiting so...

Perhaps not the best news sources you provide there.

Barry, golfing?! Naw! He was just taking a break from "Michael" to go play with some white "balls" for awhile.

Plus, he liked swishing around and getting photographed in his Mom jeans.

@11:11AM That's funny, he never visited them. He could give a shit less about either!!! Hilarious!!! He vised golf courses 150 times HIS FIRST YEAR IN OFFICE DOLT! What, he just visited to say hi??? Are that fucking stupid?? Of course he played golf!!!!! It's all he does!!!!! Don't answer, you sound like a Trumpkin!!!!

This is all a publicity stunt to keep her connected to the young crowd is all it was. I remember a time when a woman in the boxing ring was unheard of as well as viewed being low class. But then that was a time when murder rates didn't go over a hundred dead in the streets every year. Murder in Johnson County was unheard of and a rarity. You could go to Oak Park and sure teenagers were everywhere but they wasn't packing guns and willing to engage in a shoot out over nothing. You didn't hear of Mayors diving into bushes over gun fire while out on the town.

You haters can pick on us old geezers all you want, but it's you who has fucked up a good thing, not us.

^^Thanks we will. Stop posting remember when shit! Nobody cares!!! Now go away!

@11:40AM-what you're doing is called deflection and whataboutisim and its a sure sign you have no defense and your post is as worthless as you are.

"How many times has Trump played golf as President of the United States? Since taking office on Jan. 20, 2017, Mr. Trump has reportedly been on the grounds of his golf courses or played golf elsewhere 172 times since becoming President, and that's as of Feb. 18, 2019.

The cost of Trump's golf rounds to the American taxpayer varies by round and course, but it has totaled so far in the tens of millions of dollars.

He previously was on pace to visit his golf clubs more than 650 times in an eight-year presidency. However, his pace as of Aug. 6, 2018 now indicates Trump would spend as much as 745 days of his presidency at a golf course if he wins a second term and serves both terms to completion.

So is this going to be your go-to rant now that Mueller's 'investigation' is about to end with a whimper? Too funny.

Here's hoping she gets in the ring with someone who can knock the leftist outta her whore ass.

Congresswoman Lickaho squaring off at close range with another woman is hardly front page news, it is her lifestyle choice.

I don’t have a problem with our cage fighting congressman being in her district at the old st Mary’s/now kckpd boxing gym. It’s in her district. It’s a taxpayer funded gym for the cops but better than an empty church and the stained glass is all in tact. As far as kck cronyism this one is totally benign so I say live and let live. Thanks ,
Radish