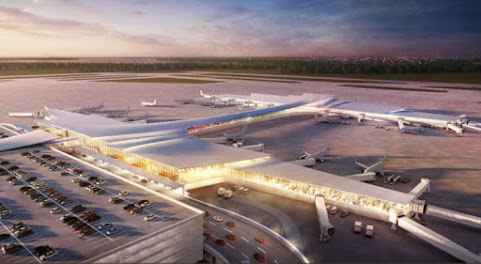 "It won't surprise TKC readers that KCI has become a national case study in out-of-control . . . It's official. KCI is the gold standard for don't turn airport development into a multi-billion dollar goat rodeo. It turns out the city's leadership is useful for something, even if that's a seminar on dumb and dumber."

Airports: Kansas City, O'Hare Redevelopments Show How Not to Deal With Transparency

So, when the flexibility of Edgemoor's proposal did, indeed, turn out to mean higher costs for Kansas City taxpayers, it's hard to take the council's side and say that that couldn't have been predicted, considering what they picked. The fact that a well-meaning attempt at transparency turned into a process beset by public campaigning and juvenile bickering also serves as a cautionary tale about how openness and transparency can devolve into petty political sparring from interests with their own agendas when it comes to major public works projects.

National embarrassment, no wonder people call this flyover country, we have the dumbest mayor and clowncil on the face of the earth. Take particular notice to the fact that Chicago and killa shitty are dummocrap run cities and are in the top 6 for most murderous cities. Absolute disgrace.

Yeah I wish the process would have been closed all along like the article recommends, then none of you morons would have anything useful to say about it.

Regional Airport Authority. When this gets done it will add more than $50 per trip out of KCI for each passenger.

City Hall chiming in with the usual defensive, childish posturing. This is why people long for the Pendergast era, where we got a little competence to go with the corruption.

The thing about city government is that those "responsible" for this mess will be long-gone and untouchable when the whole mess implodes.

If this process was audited you would probably find out that this is a horribly managed process. Claims made by politicians would be unveiled as lies. The truth is that the airport is a bad ides.

What's worse is that it's like a snowball going downhill. The longer it goes on, the more problems arise. Sad to see that this is just the beginning of the mess.

The way they did it was a big part of the problem. A rush job that just wanted to get the votes and didn't are what was actually being accomplished. That's the way Sly does everything. Not very strategic at all and just a mad dash money grab. This time it'll cost KC dearly. For a long time into the future.

James, Justice and Lucas are now receiving national attention for their misdeeds - Petitions for recall need to be started now, so they can all leave Office in complete disgrace!

Lets remodel what we have and get on down the road. Several good plans are out there..

This seems to be the one thing on TKC that every poster agrees upon. This is amazing. I was wondering how much the cost would increase if they named the airport "The S'lier James Massive Debt on Kansas City Missouri Airport" ? You know because the S'lier James Family would want Royalties on the name.

This airport issue is so embarrassing for this city. Our elected officials are so lost and so naive. The cost of this thing OMG! They have no shame. There is very upsetting. Please email your council member and make your thoughts known.

Scott Wagoner – 1st District
Scott is apparently too arrogant to list his own email so he uses his aide. He is running to be the next mayor, what does that tell you about the type of mayor he could be? UGH!
kimberly.randolph@kcmo.org

Mayor Sly James
The mayor does not provide his email address, you have to go on the website and fill out a form.
http://kcmayor.org/contact/contact-us

The James/Justus National Monument to Incompetence in Civic Administration.

11:16 for the win, when you start it all wrong, it tends to stay on that path. The fix, then the rush, then the cluster.

What is funny though is this was how things were done before the airport, just that the airport rose to the level of visibility that the methods that were typical were then on full display.

The regional governance mechanisms missed the boat on integrity, visibility, correct procedure, securing full range of options in genuine review, and now this.

Don't get the same methods for the Streetcar expansions with the rush without coherent justification or full review of options. The pattern repeats itself.

A log of players besides Sly had a hand in this fiasco, where was Marc, the Chamber, the ATA, Kansas regional representatives. Integrity went on vacation.

if they continue this, be sure to get the name of the contractor that takes the first blow demolishing terminal A.

lazy mthr fckrs just want to demolish terminal A, synchronize as little as possible, and shit a POS airport out on a constricted tabula rosa.

or that was flipped. U connect A&B, terminal C for second tier, etc.

from parking garages, enter connector from lower level and go up to TSA. One side or both side pre/post TSA amenities straddling baggage/passenger pickup. If you want to socialize with those not flying before or after, you meet them downstairs at d'cafe or starfucks.

Do i have to draw a picture or you understand that.

if you remove one of the garage, you can have a fckn put put golf course and have a beer in the rolling fields of wheat while waiting for your flight.

or one is underground parking only and you play golf on top.

that is the simplest schemem i can think of and does not require building some superbowl atrium or create dark sliver of a gorge when dropping off passengers.