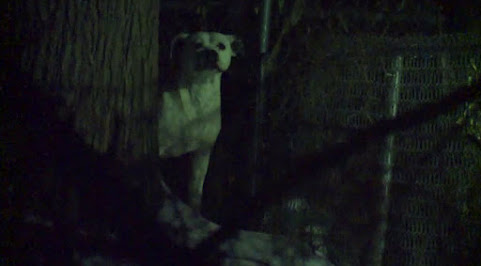 We needed to retrieve this link because it didn't get enough attention BUT provides a really important REALITY CHECK regarding real life outside of the gilded downtown loop . . .

For the last 30 years, Stephanie Singleton has enjoyed living near East 72nd Street and Bales Avenue in Kansas City without any major worries -- until now.

"I'm just afraid that he's going to bite me, my grandchildren or some of the children in our neighborhood," Singleton said Wednesday.

She said for nearly a month, a white, male pit bull has been roaming around her neighborhood, and the 71-year-old grandma can't rest.

"He had me trapped in my car one day last month. I couldn't get out of my car. He was running around the car, barking and barking at me. I have called the city's 311 Action Line, and I've called Kansas City Animal Control. It's so frustrating because that dog is aggressive and really vicious," she said.

Singleton said the dog has been a menace to her, her neighbors, even their mail carriers have had frightening encounters with the canine that keeps coming back.

THEY STILL HAVEN'T CAPTURED THIS DOGGIE!!! IF KANSAS CITY CAN'T LOCK UP A LOOSE DOG THEN CURBING VIOLENT CRIME IS GOING TO BE MUCH HARDER THAN ANYBODY IMAGINED!!!

And so, this is one of many threats that persists in local neighborhoods whilst city council & Mayoral candidates continue to debate social justice and culture war issues.

Maybe the murderous black hoodrats could take care of this problem, target practice perhaps? If this dog is truly dangerous and if the big ole boys of animal control could capture it, it will be put down, one way or anyway. Just sayin

If every pit bull and pit owner disappeared into a bottomless hole today just imagine how vastly the world would be improved.

The true skidmarks of society are drawn towards these dogs.

A pitbull in the ghetto? No way!! And yet all we see on every social media page is how innocent these things are. If the story had broken before the dog was caught, there probably would have been a bunch of Facebook dumbshits looking for it thinking it's just like the one at the pet store. People get weird over dogs anymore. This typifies what a dangerous breed this dog is. Of course it doesn't help that whoever owned it, either trained it to fight or beat the shit out of the thing. After all,this is the hood where violence is revered and loved.

The dog needs to be enrolled in Pre-K. That way he at least gets fed two meals per day rather than starved and chained to a tree in the back yard and ignored.

Kind of ironic a white dog is terrorizing a black neighborhood doe.

Rat poison works good! Run it down with a car. Lure into your yard and shoot it. Set it on fire with gasoline and a match.

It’s a dog, not a hipster. The dog doesn’t deserve to be treated like that.

Absoliutely. You said that better than I would have.

Wow this discussion should reign city hall and their reckless spending in.

Now 9:22! That was evil and racist & ABSOLUTELY IGNORANT!

I hope they definitely get it off the streets however. By ANY MEANS NECESSARY!

IT'S RAINING OUT, WHY CAN'T THE CITY KEEP THE STREETS DRY!?!?

I had the honor of inheriting a rental property from a relative 2 blocks from this area and have had the luck of getting a tenant who is not only in good standing on rent but also does a great deal of yard work for which i deduct from the rent each month and to see the way the other rentals maintain these properties is a joke.Im not sure if this is the same dog but there is one that tears every damn garbage bag up for 5 blocks,i stop by my property every Thursday night and grab my tenants trash and dispose of it at my employers dumpster to save her and I the hassle of having to pick up what the damn strays tear apart.

Whenever I watch news segments on rescued animals, I notice the cages at the shelters are always full of pit bull variants. I love dogs big dogs like Dobermans and Shepherds, but would not have a pit bull. I believe somewhere there's a violent trigger in their genetic makeup that one never knows when it will show up.

^^^^ and cocksucker chimes in!

The dog is only as bad as the owner treats it,there is a guy who walks a mastiff over there and the damn thing has to walk with a 40 pound tow chain around its neck because the owner wants to act like he is DMX in a rap video.

Negroes should not own dogs. It should be the other way around.

12:19, I feel your pain. which is why my trash goes into animal proof containers when I set it at the curb. I am sorry your property is located in a trash bag only at the curb section of town, but most neighborhoods in the city dont have your problem. With that said, you claimed you own the property, you also claimed your tenant does yard work and keeps your property looking better than others, so why not have your tenant clean up the said 5 bags of trash that animals like Raccons, possums, squirels, and neighbors who are looking for food because they dont have any, or how about just own rental property in a part of town where you dont have to be a slumlord? Fair questions I think, and if you think your property in the ghetto will ever be something that it could never be you might see a shrink on how you can fix that mentality and invest in something that will actually work for you, so you dont have to bitch about trash bags and the fact your property sets right in the center of the landfill. Something to think about slumloard :)

Its not the dogs quit blaming the breed of the dog dammit it really pisses me off when ppl do that its the breed of the damn owner do you think pitt bulls are born biting and ripping ppls heads off no they do it bevause someone raised them to get their heads ripped off pitt bulls are just like any other kind of dog if you raise them right they are loveable and loyal and will protect you at any and all cost but if you mistreat them fight them or harm them then yes that is when they turn on ppl its not the dogs its the imature ass losers who raised them just for a sec stop and think how you would feel if you were raised to fight your own kind to the death and by they very hands of the person you were loyal to and just wanted to love and protect or you was beaten and mistreated in some way by the hands of the very person you would have given your life for you would be mean too these dogs have been givin a bad name but its not because of the dog that they have a bad name its because of the very person who raised them dont blame the dog put the blame where it goes on the owner..

^^^^ You are an idiot. Pitbulls should be bred out of existence. Do a search on deaths due to dog attacks.