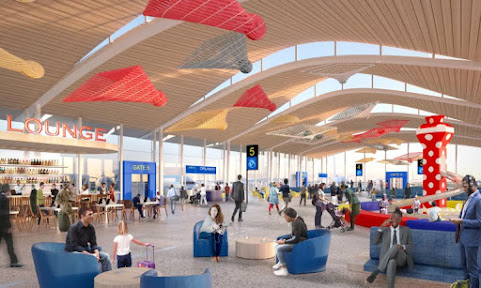 They promised the new airport wouldn't cost Kansas City a dime. They were lying.

KICK-ASS TKC TIPSTERS AND OUR BLOG COMMUNITY CALLED IT . . . THIS WEEK THE AIRPORT COMMITTEE MAKES A RETURN TRIP TO BEG FOR TAXPAYER FINANCING FOR THE SKETCHY DEAL THAT'S QUICKLY FALLING APART!!!

Proponents of the cash grab want to pretend that it's bridge financing that all gets paid back . . . The reality is that KC is still on the hook for a lot of it and there is a very real COST to KC taxpayers. Already KCMO has run through about $20-million and they haven't even started turning dirt.

Here's the word from AWESOME TKC TIPSTERS before this thing inevitably ends in a rebid . . .

This thing keeps coming back like a bad rash. The Aviation Committee is scheduled to meet again Thursday. As you can see from Section 8 of the proposed ordinance, Council members backing the current airport deal will once again ask for permission to spend 72 million dollars of city money; cash voters were promised they would never have to pony up . . .

Don't forget to take a peek at the the newish 2-billion dollar ask as well . . .

What they really want is a blank check.

The airport is going to the biggest construction project in KC history. I guess it's also one of the most overpriced and corrupt. Already we've seen so much deception from the people who sold KC this bill of goods, I guess it's just par for the course that they would also fake the real cost and the financing. We'll never know how much this thing costs until it's done but it won't be anywhere near what was promised.

Sic Nicole Galloway on this project and she will find a lifetime of waste, fraud and abuse.

The rehab of KCI should have been started long ago.

Go Bond money not available as it has been funneled to the developers.

Absolutely right. Time to get outside help. The last Aviation Committee meeting shocked even some members when they learned that a Councilman on the committee has been holding off-the-record talks with airline executives. Huge red flag. Remember: Airlines are negotiating a deal with the city worth billions of dollars. If they get favorable treatment from city negotiators, it could save them many millions of dollars; dollars that taxpayers might have to pay instead. The process must be completely open and accountable. It's time to ask the MO State Auditor, Nicole Galloway, to look into this mess. If you agree, contact her office and ask for an investigation. She can be reached here: moaudit@auditor.mo.gov

Another stupid liberal who is f***ing us all! Dumb ass why don't you cough up more tax money to cover everything!

Seriously. Jail time would probably do these local shit for brains politicos some good.

@9:31AM Why don't you stop posting stupid questions?

That picture above just can’t be of the new airport at KC, can it? The architect Skidmore Owings and Merrill is considered the best architecture firm in the world and THATS their design for KC and the exploding cost of the airport is how much? This picture alone and all that it lacks should be reason enough to investigate or stop this project and start over! OMG!

^^Jail time would probably do these local shit for brains politicos some good.

No can do, they are all on extended vacations in warm weather brought to them by the airlines.

This would be like giving the homeless guy on the corner $1,000 and say, "spend this wisely."

$120 million for the street car that goes 15 blocks and will never get expanded.

What are the advantages of living/working in KCMO when there's a state line and plenty of of suburbs who won't fist you and waste your money on stupid shit. KCMO needs a reformation

@10:11am is sure right about the photo.
It looks like something from the 1950s or 60s.
Are the counters salmon colored formica?
Where are the orange shag carpets going to be placed?
What a joke!
This entire fiasco has been amateurish and incompetent from the start, so it's no wonder Sly and the gang work so hard to keep the facts from the public.
And the council members who have played any part in this should be automatically excluded from consideration in the mayoral race.
Maybe that leaves only Clay!

Pigs feeding at the public trough.

I see that picture above includes a children’s play area. Does it also include a bark park? Teresa Loar, since you are running for re-election based on your advocacy for puppies, maybe what you really should be advocating for is a bark park inside the terminal for your puppy. The new "single-terminal" that is. -LMAO

@1:16 Good point about the bark park, but Teresa Loar is most proud of her big messy smelly kitty.

airport is a nightmare. The mess continues under the name of Sly.

If there is good news about the airport, it's that the council is looking around for better options beyond Edgemoor. They cannot get it done.

Newspaper ought to investigate itself and fine the editorial board for recommending this as not costing taxpayers a dime.
Even federal money is taxpayer money.
Anyone who thinks this fiasco goes for less than $10 Billion should vote on naming it Frank White- Cleaver airport.
Declare (Carwash) bankruptcy and don’t pay the mortgage.