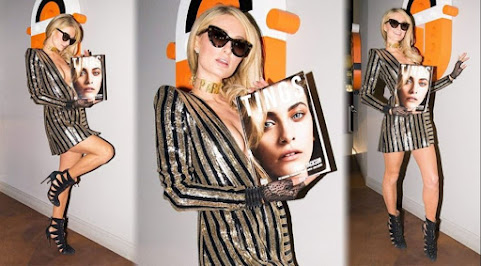 Hottie Paris is still the socialite most celebs want at their party but she's now a longtime denizen of the tabloid scene . . .

Daily Mail: Move over Paris Hilton! Heiress to KFC chicken fortune poses in nothing but $10M worth of diamonds for a VERY risque James Bond-inspired shoot

Closer to home, we're having a good time gathering these morning links worth a peek:

Big Sexy Clowns Us All

KANSAS CITY, MO (KCTV) - Kansas City firefighters are investigating the cause of an apartment fire that has left one person displaced. The apartment fire took place just after 3 p.m. Wednesday at an apartment located on East 31st Street and Brooklyn Avenue on the city's east side.

FAIRWAY, KS (KCTV) -- Charges have been quietly dismissed in a case that grabbed statewide attention. A Missouri truck driver busted a man he suspected was a pedophile predator. He did it live on Facebook and prosecutors eventually brought charges, but defense lawyers questioned if these cases would hold up in court.


The Chiefs will be back

In a somewhat surprising move, the Chiefs have fired Bob Sutton, the only defensive coordinator Andy Reid has employed in his tenure as the head coach in Kansas City. It's only surprising because Reid is supremely loyal, not because of the results on the field.

Home Team Lives In The Past

On a Kansas City Royals depth chart filled with question marks and players yet to establish themselves as viable major leaguers, third base may cause the most consternation. Currently, former prospect Hunter Dozier is listed atop the depth chart, with Chris Owings as the backup.


Airport was among best in the US

This Hallmark Cards postcard titled "Airplane View of Kansas City, Mo." is actually a copy of a photograph taken in 1929 or 1930 by the Curtiss-Wright Flying Service, Photo Division of New York City. It is one of 57 photos in the archives of the Missouri Valley Room of the Kansas City Public Library.

With that getup, Jason needs to come back to KC and run for mayor.
Given the current menagerie, he'd be hard to pick out of a lineup.
Bow tie would help.

^^and you have a tiny dick. Just like your President.

^^ Are you the official dick measurement boy? Seem to know a lot about it.

^^Yes I am. Your wife gives me all the details.