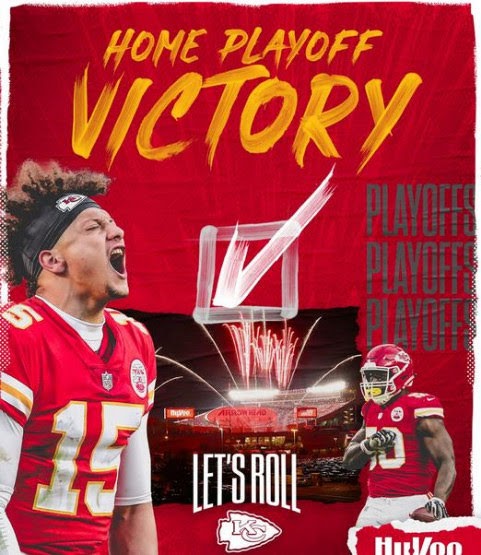 Perspective, in a tweet posted just moments ago, Kansas City Chiefs marketing used the same "let's roll" language that kicked off the War Against Terror after 9/11 tragedy in order to mobilize their fans.

Brief aside, in lieu of a playlist this evening, a few words of wisdom recently struck a chord over the holidays and seem apropos for tonight . . .

They put drugs in your food. And they film you. There are messages in every game.

Do you know what PAC stands for? P.A.C. Program And Control. He's program and control man. The whole thing is a metaphor. He thinks he's got free will but really he's trapped in a maze, in a system. All he can do is consume. He's pursued by demons that are probably just in his own head.

And even if he does manage to escape by slipping out one side of the maze. What happens? He comes right back in the other side.

Accordingly, here are the links for the game tonight that curiously seem to all reference some form of dominance . . .

Charlie Neibergall/Associated Press The top-seeded Kansas City Chiefs beat the No. 6 Indianapolis Colts 31-13at Arrowhead Stadium in Kansas City, Missouri, on Saturday to advance to the AFC Championship Game. KC will play in the AFC title game for the first time since 1993, where it will meet the winner of Sunday's contest between the New England Patriots and Los Angeles Chargers.

Something About The Weather

KANSAS CITY, Mo. - The Kansas City Chiefs ended their playoff agony in epic fashion. Patrick Mahomes played with the poise of a veteran in his first postseason start, running for a touchdown and executing the offense to near-perfection on two other scoring drives while the much-maligned Kansas City defense made Andrew Luck and the Indianapolis Colts look as bad as they did at the start of the season in a 31-13 victory Saturday afternoon.

With surprising reliance on a defense that kept the Indianapolis Colts offense out of the end zone during the first half, the Kansas City Chiefs soundly defeated the Colts 31-13 to advance to the AFC Championship Game for the first time since 1993 - and the first time ever at Arrowhead Stadium The Chiefs won the opening coin toss, and elected to defer to the second half.


Did Patrick Mahomes use 'Helen Keller' as a pre-snap call?

On Saturday against the Colts, Kansas City Chiefs quarterback Patrick Mahomes barked out a pre-snap call that sounds like "Helen Keller" late in the first half, with the Chiefs just outside the red zone. Fans watching the game were caught off-guard. that play was called Helen Keller?

You can't have an up without a down. That's probably one of the reasons why there are more people in jail in the US than in China.

Maybe a reason that giving up constitutional rights is now signaled as a virtue. Among the lower caste.

Okay, don't get weird about it.

Great day for the city to celebrate an achievement for a change!

Or maybe just a distraction to keep people from realizing that KCMO can't even keep the lights on? And they cheer about it.

I don't want to get into all of this weirdness published by TKC.

But I do want to remind people that I predicted the Chiefs would win two weeks ago and there were a lot of doubters on this blog saying nasty things and hoping for the worst. YOU WERE WRONG! The Chiefs ruled today and we're on the way to the Super Bowl! GO CHIEFS!

Why do you say we?

You probably don't have any affiliation with the team at all. Just a pathetic fan who pays to seem bigger and stronger men bash in their brains. Sorry that you have to live vicariously.

Um, I'm a season ticket holder. Have been for years. And just thought I'd check in with some of the negative d-bags on TKC to let you know that some people in KC just want to cheer for the home team and WE were right. Sorry that you can't even enjoy a win @8:18. That seems more pathetic than anything else you've imagined.

Time to slide into the willing ladies of the P and L district tonight! Good times!

More terrifying still, then getting beat by Mahomes, Putin is now able to project words out of Trump’s mouth in real-time, literally using Trump’s head as a puppet, or like one of those Mission Impossible masks.

makes me think that this isn't a football roundup at all! The next thing you'll tell me is that Rachel Maddow guy is really right and Trump is going to have to answer for the Mueller report.

OMG! What happened geezers?!?’ We were supposed to be 1 and done! You said to book it. What happened? Talk a little about how you worthless geezers have no idea what you’re talking about, and then, contrast that with how Tony has no fucking idea what he’s talking about. I’ll listen off air.

The geezers must apologize.

Mahomes wears Birkenstocks with socks and listens to Nickleback.


8:24 You're the PINKO here, sounds like you have a sickle up your ass idiot.

Let me quote TKC readers for the last two weeks:

Let's hear from you now.

It was a toss up for me, so good for the chiefs, there’s always next week though! Bwahahahaha!

You’re a homosexual. Go away.

Your salad got tossed, right?

But the pants-shitters had a narrative!! The Chiefs were one and done! Tony said “ It was a season of disappointment” The phony flag-fucking geezers said the Chiefs would lose! Hahahahahahahahha. Fucking geezers! Dumbest animals walking the planet!

Yeah, where are all the one and done folks now?

So, 8:21, you've dumped tons of money into some rich guy's pocket and paid out retardedly for overpriced beer and parking. But that still doesn't make you a "we' unless you play for the team.

Bread and circus for the hoi polloi.
The Rams v Chiefs game should have told you the fix is in with the NFL.
Like 2 heavyweights fighting for the belt that are both pimped by Don King.
The zebras control the game.

TPTB are always seeking to divide us. There are a few posters here that have been programmed to go after "geezers", just like in Mao's cultural revolution.
Even the NFL is full of programmed messages, from paid military flyovers, to Susan J. Komen pink shit.

There is no power that can overcome The Beast, save Jesus Christ.

I’m surprised the geezer hater has much to say about this. He comes off as a major homosexual and I figured he was watching the Kardashians today instead of the game.

You silly fucks really care and keep track of old posts? HA. Chiefs played well, everybody was waiting for the implosion... admit it.

So, golden boy gets to make fun of blind people and gets a pass from the "P.C." world? Hmmm...

Why doesn't he change it to "moo-latto"?

Haven't won anything yet. Marcus Peters, where are you?

Really? Because they just won a playoff game at home Nancy!!!!!!! Now get your shine box!!!!

commerce happened. The Chiefs conned you. And you are on this blog early on Sunday morning debating much smarter people. The world keeps turning. It's evolution baby.

^^^Say the loser on this blog early on Sunday morning. “Much smarter people than you” on this blog???Really??? Nice try loser, now go clean the bathrooms. Your break is over!!!!!!