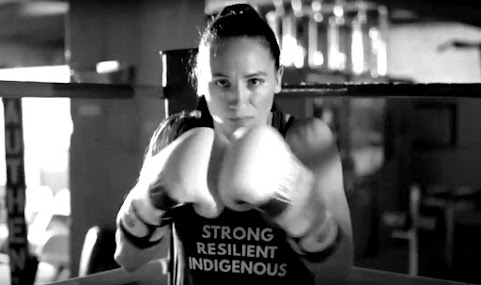 Rep.-elect Sharice Davids said during an Associated Press interview Wednesday that the wall Trump wants to build on the U.S.-Mexico border is “not a good use of taxpayer resources.” Parts of the federal government have been shut down since Dec. 22 because the dispute over the wall has prevented passage of funding bills for several departments.

The legislation Davids supports would fund the Department of Homeland Security through Feb. 8, with $1.3 billion for border security. Trump wants $5.6 billion for the wall.

She won't be there to greet the crowd but JoCo progressives are still sending their love . . .

"We're bringing cards to sign and a petition that shows our support for H.R.1, a sweeping anti-corruption bill that we hope will be one of the first items that the new House passes. Please bring a hand held sign saying how thrilled you are that Sharice is your new representative!"

Definitely on her way to one and done.

A vote for clueless Sharice was a vote for Pelosi whose hand will be up Sharice’s ass like any puppet master.

Good for her! She gets to get on the winning side. Trump gets handed a major defeat!

^^^ It's a given that all liberals have a tiny dick. It's just known fact.


Maybe if Sharice Davids would have believed in a wall her people wouldn't have been taken over by us Europeans.

This is totally a hubris thing for Trump. Enough for him to trot out some bullshit explanation that the trade agreement is somehow going to pay for this. Mind you, he has no numbers whatsoever to back it up, and even if he did they would be assumptions. But, his base fucking loves it. Slurping that shit up like one of Trumps well paid whores.

The thing, it's all so stupid. A fucking wall? And don't give me this shit about how it will coral migrants into certain areas or whatever bullshit explanations you clowns like to trot out as if you've designed the layout. It won't impact a thing related to migrants. They will adapt and overcome.

Or, he could do the smart thing....take the Democrats offer to potentially double his number and spend it on HR and technology. I mean, create some jobs while you're at it. But noooooo, gotta have this stupid fucking wall for the inbred rubes who support this clown.

^^^ are you stupid or something?

8:03 President Trump likes to use simple words to describe complex issues. The term "wall" is more than just a cement wall. His former chief of staff, Kelly, said that in an exit interview. From an early time in his administration they recognized that a "wall" includes a number of different physical barriers - not just a continuous cement wall crossing the US/MX border.

Where does Trump get these crazy stupid ideas? Oh yeah - it's CBP. Yep, those crazy stupid folks that work on the border day-to-day and see how/where/when illegal immigrants try to cross the border.

But, those darn under-educated Trump voters don't know any better. Just keep plugging along at the same thing that's been done for decades and hope things will get better for the illegal immigrants living in the shadows in our country.

Kelly said it wasn't a wall. Someone else said it was a metaphor. Trump says it's a wall. Whom to believe?

Sharice is a stupid cunt

You can hear laughing inside the White House from out front as the Dems announce their 2020 candidates. I asked the tour guide.. what is with all the laughing?

Yes please Move On.. to another country if you don't like ours.

You don't have a sovereign country if you don't have secure borders. Wall or no wall. We don't have a wall and we have terrible immigration laws. They need to be fixed but this group that was elected by stuffed ballot boxes nationwide won't do it because they don't have experience in law, governing, balancing a check book, driving according to laws, or anything. It's the "#IWANT" crowd.
Time to grow up and be a real American and stand up for this country. Stop tearing it apart.
The truth is we do need immigrants in this country to fill jobs and make it better. BUT, they need to come in legally and assimilate in lawful behavior and language skills.

How the dems going to stuff ballot boxes with illegal votes if a wall goes up?

This bitch is a fucking idiot, just like Cortez. Pie in the sky grandiose ideas for some "green" energy economy, even as we are awash in oil.

Progressives are retarded, narcissistic, self absorbed, holier-than-thou, blinkered, Bolsheviks with the historical perspective of you average squirrel.

I support the wall and the gov't shutdown. There's a lot of us out there who do and just don't talk about it. That is all. I'm not going to argue with anyone on the internet about it

^^yet here you are! Thanks for your opinion, now go clean the fucking toilets dummy!

What We Really Need said...

I want a wall built or at the very least machine gunner nests loaded with live ammo all along the border. Orders will be simple, anyone or thing trying to cross over is put down 2 inches after crossing the line. That will be more effective than a wall and a much better deterrent to stay away from the USA if you're an illegal.

What We Really Need said...

Is less idiots like 10:30 who think anyone should be allowed to live in this country and have better healthcare and living conditions than those who legally supported this country all their lives.

^^^ No, but your wife wants to. She told me that last night when she was swallowing my huge load.

^^^ We can't tell if Jane Fonda or Angela Davis wrote above shit post? Which traitor are you?

So what these Dems get done today in the house besides lining up and kissing Pelosi's puckered butt hole?

I think pelosi needs to shovel some shit off the sidewalks in her home town of SF.

8:21
From a CBP officer:
“Do you think a wall is gonna stop them from coming in? The fact that you have a house, would that stop a burglar from coming in?” said Agosttini. “I used to live about 30 feet from the fence, OK? I’ve been seeing these things for 30 years.”

My take away from the article is:
1. Further walls are probably not necessary
2. Tactics put in use in the past are working based on numbers
But, keep going after that wall catnip for dipshits. It's irresistible to dumbasses.

Let us all know which CBP agents/officers requested more wall.

It’s funny watching the dems puff their chests out like they’re some kinda badass’s, in a couple days or weeks the country will find out what fools they voted in, this is a huge step backwards for the country. Here comes the do nothing dummocraps again.

^^Thank God for them. Now they bring much needed oversight to the criminal repubturd cabal. Look for multiple investigations and multiple subpoenas for Russian colluder Trump!

^^^ And what proof do they have? Just endless investigations?

^^^ 8:21: Let's all remember that the CBP officers union endorsed Trump and the "wall". The National Border Patrol Council, which represents 16,500 agents, made its first-ever presidential election endorsement of Trump. Central to that endorsement was the wall, interior enforcement, and supporting CBP/ICE agents.

I'm going to defer to this endorsement and continued support of Trump's border policies rather than some random ICE officer you've quoted.

Again, let's talk about creating an immigration system that treats people with dignity. Incentivizing families and children to take on perilous journeys to come here and pick strawberries, clean dishes, and watch your children without adequate pay or legal rights is not humane. These border agents see the horrific realities of this situation on a daily basis and want an end to it.

Tony needs to post a trigger warning for his snowflake geezers on the Sharice posts so they can retreat to their safe-space and avoid the continual meltdowns.

The pants shitting derangement is worse than from the old Hoopz posts.

Ha! +100000!!!!!! Sin’t That the truth! They hate her because she is everything that they’re not; young, smart, relevant, and changing the world! Hell these geezers won’t even change their diapers!

Excellent points, Steve. But Dims live by the “do as I say, not as I do” philosophy.

3:17 - your last statement about "incentivizing families and children to take on perilous journeys to come here.....", do you think a wall is going to change that?

What's the root cause of why Central Americans come to the US? You should research this because I think you'll be surprised to know (or not) that US policies have put us in this position.

As for drugs....they continue to flow copiously right through the checkpoints. A wall isn't going to change that issue at all.