MISSOURI REP. JASON SMITH YELLS 'GO BACK TO PUERTO RICO' AT LATINO CONGRESSMAN: IS IT RACIST??? 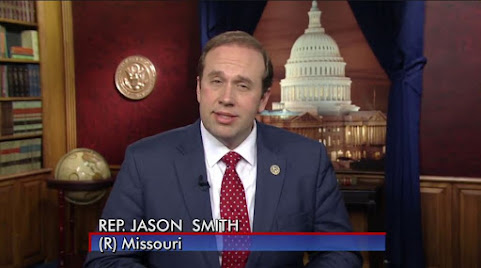 A question of etiquette confronts us as a Missouri lawmakers join the fray of nasty shut down rhetoric and fighting.

The retort was hollered during the remarks of Rep. Tony Cardenas who, actually, represents California.

Rep. Jason Smith acknowledged he yelled “go back to Puerto Rico!” at Democrats during a tense situation on the floor Thursday afternoon, but the Missouri Republican insisted it was not meant as a racially motivated remark.

A Smith aide said the four-term lawmaker intended the comment as a shot at House Democrats over their 30-member jaunt to Puerto Rico last weekend — an event that got heavy coverage in the conservative media — rather than an attack on any minority lawmakers.

Now, to be fair . . . Telling somebody to "go back" to somewhere isn't inherently racist given that TKC is always telling hipsters of every demographic persuasion to go back to JoCo, Brookside and Whole Foods.

IS CONGRESSMAN SMITH COVERING HIS TRACKS AFTER ENGAGING IN ETHNIC HATERATION?!?!?

We hope constituents of his section of po'dunk Missouri will go back to their walnut bowls and figure it out in the aftermath of what is, at the very least, an exchange that wasn't very classy and earned rebuke on the national stage.

Agree it's not classy.

Please reopen the government so that people can get paid and the people's work can be done and then address the serious issues that have been ignored in Washington for many years.
And stop mugging for the cameras and playing make-believe "look at me" celebrity.
Or quit and give some adult an opportunity to serve.

Jason Smith?
GO BACK TO ENGLAND, you poofty Brit!

Of course it was racist.

Probably racist but just low brow. Makes everyone in Missouri look like a hick. he's a 4 timer though, so he'll be in there forever. Maybe a primary challenger would get something better for that neglected part of the state.

Appears members of Congress and the MSM need to start taking the new pharmaceutical groacet.


It's only as racist as "Typical White Women."

It's kind of racist. I've seen worse. What it really does is make Jason Smith look like a rube.

He didn't say it as a compliment.

So Puerto Rican is now a race? So are Mexicans, Guatemalans, Salvadorans, Puerto Ricans etc. all separate races or are they all members of one race, and if so what's it called? Would the same be true for English, French, Germans, Polish etc? How about Ethiopians, Congolese, Somalians, Nigerians etc?

He was actually referring to the Dems who were down in Puerto Rico during the shutdown on vacation and calling them out for going there instead of working on stuff during the shutdown. Since the guy was mexican or whatever the media ran with racism because that's what they do these days and made him apologize.

This whole thing was a hit to begin with

I think the fact that turds are brown is racist.

Racist? not reallt a question but will any GOP supporters care? Thats the real question.

Of course it was racist. We need to promote him to a cabinet position

Lol, I see what you did there and it's funny both ways. But we have enough mini Trumps in the Republican party already.

Democrats and socialist like visiting BANANA REPUBLICS.IF THE REST OF AMERICA REALLY KNEW WHAT IS GOING ON. LIKE MANY OF TONYSKANSASCITY READERS .A DEMOCRAT OR SOCIALIST WOULD NEVER BE ELECTED. And the information is out there .They are to busy and trying to provide for there Family. Some City's will turn into BANANA Republics.And there will be Crime and Corrupt Politicians. Or as Some call it THE SLY REPUBLIC.

Tonyskansascity There is no FAKE NEWS HEAR.

OK, so maybe he's not a racist. The defense is he's just an idiot that can't control his anger. Just another typical GOP asshole.

Are you really that ignorant? Don't bother to answer, we all already know the answer.

Bullshit.
If someone called you white trash and they were brown skinned, you being crying racism. Stop justifying bad behavior with stupidity.

I think the fact that trumpturds are racist is a fact.

Why do we have minorities in Congress anyway?