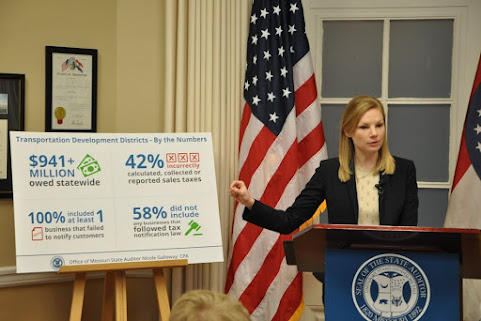 She has called out TDD schemes like the Kansas City Toy Train Streetcar as "RIGGED" and also manged to stay above the fray amid midterm elections. Here's her latest effort that's worth noting . . .

In remarks given after she was sworn in for a second term as Missouri's 38th State Auditor, Auditor Nicole Galloway today reaffirmed her office's fight against public corruption. As part of that renewed commitment, Galloway announced she is directing increased resources towards investigations of fraud and abuse in government in a newly created Public Corruption and Fraud Division (PCFD) within the State Auditor's Office.

She might as well start here in JACO/KCMO. That'll keep her busy for quite a while.

The corruption all emanates from KC and cleaning up this city will send the right message across the state.

Good for her. She can use KCMO as a training ground for the employees.They would learn very much about waste, fraud and abuse.

The auditors office will be busy for a very long time, I'm afraid.

I would like to get on top of Ms. Galloway

For Gods sake, AUDIT EVERYTHING in KCMO!!

I don’t care who it is, throw all the lyin, cheatin crooked thieves in jail.

Just don't interfere with my Chiefs! And my Royals!

I'd hit it! Although she is in dire need of a breast augmentation...