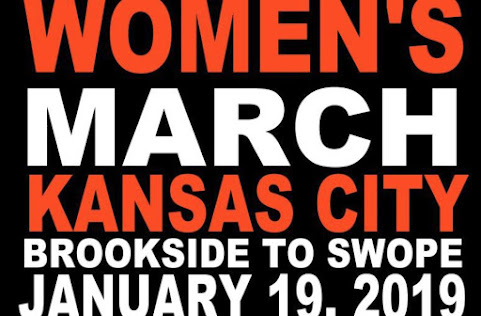 An update on drama and weather fear pounding away at these protesting ladies . . .

DUE TO INCLEMENT WEATHER EXPECTED THIS SATURDAY. THE WOMEN'S MARCH AND RALLY LOCATION HAS CHANGED. THE MARCH HAS BEEN SHORTENED, AND THE RALLY HAS BEEN MOVED INDOORS. PLEASE SHARE THIS INFO.

Here's a legit question from their social media discussion . . .

"Is this local rally/march distancing itself from the national rally? The Women's March co-president has refused to condemn an antisemitic church leader and multiple organizations are dropping their support from the event."

Great overview of the controvesy from The Daily Beast: The Democratic Party Drops Its Sponsorship of Women’s March Amid Farrakhan Blow-Up - The DNC joins a growing list of institutions taking its name off of the sponsors list.

This is almost an answer but not really . . .

"There's little that scares men in power in this country more than women of different backgrounds talking out their differences and working together. I'm really looking forward to seeing the women of Kansas City marching together in support of each other, regardless of their backgrounds, beliefs or political opinions."

Shut the march down completely as they would be interfering with snow removal on the streets.

Forgot, What snow removal on the streets?

Kansas City needs to make some major changes. I know this is off topic but the snow removal in the city is really bad. Maybe put those jobs up to someone who can do better. Can't wait to get rid of James he has been detrimental to our city. A true clown!

Let these women march they are just making an ass out of their selves. They are against some of the things they are marching for. Some of their signs don't make any sense. They just need to be seen. They don't really have a cause.

All of these self-defined "movements" gradually expand into a laundry list of "causes" to try to increase participation, but in the end are driven by the most extreme insiders.
Just another example of the infighting and nastiness that happens every time and why these things always degenerate into "who's the most important" and thinks they should be telling everyone else what to do.
Oh, and also have access to whatever money has been raised.
Meaningless nonsense that actually ends up hurting the causes that they supposed support.
One day of coverage on local television and the Star and it will be quickly forgotten.

I thought it was called off due to too many white women showing up.

Might draw some attention if they would march nude. They would freeze their asses off.

Shake Shack will be hopping.

My personal policy is not to take anyone seriously who is wearing a vagina hat.

This another one of these MEN BAD things?

All this will be is an abortion rally. Ex hippie old white ladies dressed as vaginas chanting “not my president”.

I want nothing to do with theses women. Don’t want to see them, be around them, hear them and certainly dont want their goodies, keep away, they are some caustic evil piece of humanity!

Asking a lot to march outside in January! That would be sincere devotion to a cause.

Farrakhan loves these women.
They won’t disassociate from Fartacon.
Fartagone is racist.
It’s a cold day in hell for all of them.

If the lesbians are going to march for Louie Farakhan, I am going to have to make my own samwich?