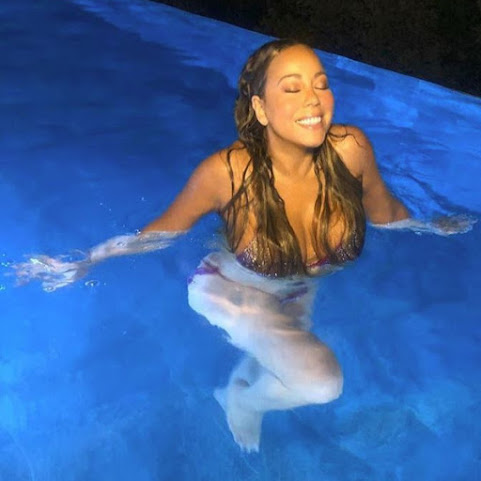 Hottie Mariah is 48 and not only making news by fighting physics and time but also prepping a world tour whilst waging legal war. Take a look:

Closer to home, these news links start our day . . .

KANSAS CITY, MO (KCTV) -- It's the game of the year and bars are already gearing up. In the basement cooler at Charlie Hooper's in Brookside, they have about 80 kegs on hand for Sunday's game and about 60 cases, which is almost 200,000 ounces of beer.

Reality Check: Many Local Making Their Living By Way Of Questionable Merch

Hide Transcript Show Transcript WEBVTT SEARCH KMBC IN THE APP STORE OR ON GOOGLE PLAY. WE'RE GETTING WORD OF MERCHANDISE SCAMS OUT THERE AHEAD OF SUNDAY'S BIG CHIEFS PLAYOFF GAME. LARA: INVESTIGATIVE REPORTER MATT FLENER WENT TO THE BETTER BUSINESS BUREAU ABOUT WHAT YOU CAN DO TO PROTECT YOURSELF.

Prepping workers for roles in an ever-updating tech space just got easier for Kansas Citians, declared Mark Hurlburt. "We do that through immersion learning," said Hurlburt, president and co-founder of Prime Digital Academy. "We have a program that we're excited to bring to Kansas City." Key dates for Prime Digital Academy Jan.

KANSAS CITY, Mo. -- The area at 103rd and State Line in South Kansas City was once considered a dying area. Businesses left. Store fronts stood empty. But that's all changing. During the Wednesday lunch rush at Cacao, the tables were full, and the servers were busy.

Every so often - and often late at night - when I'm writing about a performance, words fail me, and I helplessly explain to my imagined reader: "Dude, you just had to be there."

JOHNSON COUNTY, KS (KCTV) --There's a full staff of crews out monitoring the roads they'll put down some of this salt mix if it looks like roads are getting slick. KDOT brought in a crew to work a 12-hour shift overnight from 8pm to 8am and looking forward to the weekend they'll do the same since roads are fairly dry and weren't pre-treated.


The Elements of Sandwiching & Other Weekend Possibilities

Your restaurant week journey doesn't have to end Sunday. It's the final weekend for Kansas City Restaurant Week, but after Sunday, you won't have to go back to ordering things a la carte. Friday kicks off the first weekend of the fifth annual Downtown Lawrence Restaurant Week.

What does it mean when someone asks if the curtains match the drapes?

Why not just blow a negro,sure it tastes the same.

^^The voice of experience I see.

Here’s a reliable rule of thumb when sifting through news: If it’s important it’s not covered; if it’s covered it’s not important.

Tony,please put a padlock on Moms basement when you go get coffee,lil Vincente has hacked your computer again.

^^Don't you have some more negros to blow dude?