Conflicting stories betwixt the KC's Fire Department vs. a homeless dude and many local advocates heat up amid a recent denial.

Recap: A homeless guy claimed KCFD doused his junk and left him soaked amid extreme cold and in danger of freezing to death. KCFD confirms putting out a fire, denies the spray but doesn't mention any help provided to the victim in question after all of his belongings were destroyed. 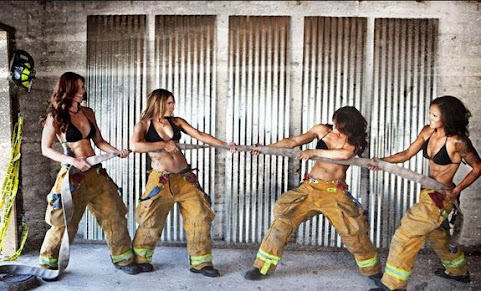 With respect to all parties involved and just to point out even more discord among factions in KCMO . . .

IS THERE AN INHERENT CONFLICT RISING AMONG HOMELESS AGAINST KANSAS CITY FIRE FIGHTERS?!?!?

A few points for consideration as a story TKC broke last year about burnt out Beardsley Road continues to influence the conversation . . .

- Ambulance services are now continually, the fastest growing part of KCFD duties so they're VERY up-close & personal with the local hobo population and realize (better than most) the danger posed by this community who still need and deserve a great deal of care - AND aren't able to pay for it.

- KCFD cites THE BEARDSLY ROAD HOBO REBELLION OF 2018 and dismisses complaints of the homeless dude by instead refocusing the conversation to decaying infrastructure. It's a cruel bit of rhetoric but actually 100% correct as local homeless pose a growing threat to local infrastructure i.e. the best shortcut in KC is closed thanks to a hobo village burned town.

Accordingly, here's the most important part of the fracas which signals growing tension as the ranks of KCMO hobos will only increase and strain local resources . . .

On Friday, KCFD said in a statement that officials interviewed every firefighter who responded to the fire about what happened, along with KC police who were on scene.

The agency said its crews didn’t violate any department policies or expectations and they didn’t spray anyone with water.

But KCFD said one man at the scene was asked to moved while crews worked to put out the fire, and some personal belongings got wet. The department said it’s common for personal property to get wet when a fire is extinguished.

In its release, KCFD said it tries to educate people about these types of fires. The department pointed to several recent fires, including one under a bridge on Beardsley Road that has left that road closed since November. In January 2018, a homeless person died in a fire at a nearby homeless camp, KCDF said.

“When informed of illegal burning at such locations, we take action as necessary to extinguish the fire and abate the threat to life, property and infrastructure,” the department said.

The guy admits to starting a fire in a public place. It could have shut down a street or caused more damage. Side with KCFD on this one.

Only agree with one part of the story here: The growing strain on resources.

At least that is some journalism and I thank you for mentioning it. it's not that KC is cruel, but there is no money to keep spending it on the homeless without taking away from taxpayers and home owners.

The fire department did not behave cruelly but they also have limited time and a budget. I'm sure that was not the only call they responded to that day.

The real question is: Did they treat him with respect or provide any help to him?

Obviously the answer is no.

If months of collected filth makes it difficult to tell your ethnicity, you might be a "homeless person".

Wasn't the guy a veteran? That kinda sucks and a bad interaction in general.

If grocery store employees have permission from their boss to spray you from head to toe with Lysol, you might be a "homeless person".

It took KCFD way too long to respond to this, so I bet they did douse him.

A issue where one side is simply doing their job for public safety vs a side who feels they have a right to stay warm. Sort of a winless issue and one where one side can easily win or create the humanity side of the issue in their favor.

Hey a got wet while sitting near that fire when that pumper truck was putting out the fire! Bastards!

Damn that must have been cold.

Whatever happened to that fire department captain that was selling guns to criminal hoodrats?

Whatever happened to that gay KC FD emt that spit on that kid at Hooters?

I wouldn’t necessarily believe the fire department side of this, since they lie about things all the time. It would amaze you if you did a random UA of any fire station just how many would fail.

I believe a bum over a fireman any day.

Would have been a lot more funny if they peed on him instead.

The FD's job is to put out fires, not to play nursemaid to vagrants.

Remember this story was brought up by the soup kitchen people, the same ones who broke the law by giving away food without a permit, the very same people the health dept put bleach on their food. I’m gonna bet this is sour grapes and the lady for the soup kitchen told this man to collaborate on this story and if he did they would split the money they could get for suing the city.

Actually @3:01, the fire department's job is ambulance service too. They could have called the guy an ambulance but they chose not to. They just destroyed his life and left him there hoping he would die. It was ACTUALLY an assault and should be investigated as such.

KCPD should do the investigation, not just the fire department.

KC in general has no sympathy for the homeless, what a disgrace.

Here's an idea, maybe the homeless man should not have started a fire in public to begin with. Let the KCFD do their job.

If the firefighters have the right to treat this guy so shabbily with no consequences, then they will be even more emboldened to treat more people in this fashion.

Officials with the city should be held accountable.

Shouldn't the so called victim's "fire" be counted as arson? Why isn't he in jail?

I don’t trust the fire department to investigate themselves. I have a tough time believing people who whine and lie.

Ah I actually get that Leave it to Beaver reference.

You think the KCFD ambulance people finger bang the patients when they are unconscious? Mast would never do that.

I bet you anything that hobo is on a list at the shelters of drunks or drug addicts who cannot spend the night there because he will not obey the sobriety rules. Firemen are heroes every day, and hoboes are an eyesore at best and a parasite at worst. There have always been "village idiots" who refuse to get a job and want to beg just enough food and coin to buy booze or drugs. I'm sorry he did not burn to death before the heroes arrived to put out the fire.

I’m still calling bullshit, the soup lady is trying to get back at the city

I believe the hobo

The KCFD captain that sold guns to hood rat felons is a hero? Everyday? How about the gay KCFD that spit on a little boy?

His junk got hosed? His smelly dick needed a power wash.

People are dumb.
In every job.
Not just firefighters.

Look at our president ;)

The guy is homeless because he wants to be. He's an adult, it's his choice. Not my or our duty to ease his way.

1305 & 1908, the fireman accused of spitting on a toddler at Hooters was acquitted. The accusers were looking for a free meal and a Payday. It was false.