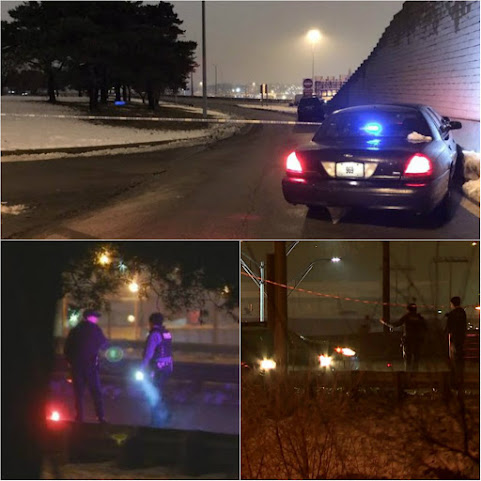 Aftermath of an horrific early morning scene that shut down a stretch of road near downtown for a few hours.

Officers who responded to the single-vehicle crash immediately noticed the woman had been shot. Investigators are now working to determine who shot the woman and where the shooting happened. If you have any information that can help police in their investigation, call the TIPS Hotline at (816) 474-TIPS.

Again, this is murder #6 so far this year compared to 2 at this time last year and 4 the year before that . . . Check the links:

KCTV5: Woman found dead inside crashed car on I-70 near downtown loop

They must've sent more than a dozen cars when it happened. Sirens all through downtown last night. Hopefully they find the suspect, that must've made our 25 million visitors very safe.

So we’re off to a decent start this year. I wonder how many of the murder weapons were sold to hood rats by that KC FD captain.

Copro boi is excited today! It turns me on!!!

^^^You'll never get past the armed guard. Tell them you're his therapist and you might have a chance.

Her trunk was full of copper wire.

“Early one mornin' while makin' the rounds
Took a transfusion and I shot my woman down
Went right home and I went to bed I stuck that lovin' 44 beneath my head.

Thought the new police chief was going to do something.

This sounds horrible and like it was just someone randomly shooting into a car. Good job mayor, city council, and KCMO

Cmon where is the womens marchers and metoo hypocrites? This is straight up violence against women! Last year a bunch of women were shot in kc and nobody “marched” for them. Maybe it’s because Donald trump wasn’t involved. Just like the black lives mattter movement. Black men killing black men all the time and not a peep from them.

I believe you were told to get it from your mom, as she is currently fucking him. Are you retarded? Quit asking!!!!!!!

^^^^ shut up shit eater, nobody asked you for anything, or should I have said axed? I’m guessing that’s some form of Ebonics you understand right.

Damn shame this city doesn't care about murders during an election year. A horrible tradition.

Dangers of living downtown are very real. I don't know the circumstances of this woman but i think that people who live in condos and high rises need to be aware that there are folks who are dangerous out there. Not like the suburbs at all.