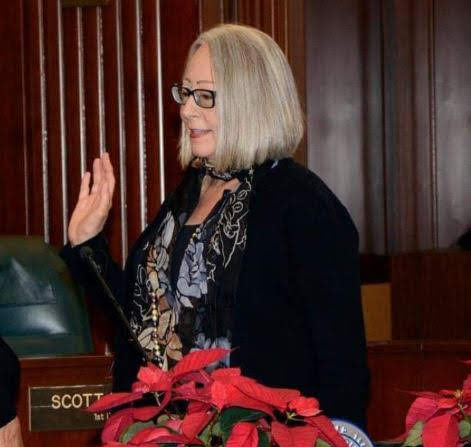 Everybody has been sworn in at the Courthouse and now it's time for another of fun & games year of tense political fighting as a new jail and continue tension betwixt Exec Frank White Vs. The Legislatures begins again.

Accordingly . . . When Legislator Crystal Williams isn't ranting against Prez Trump in her social media screeds that we can still see . . .She's thinking about her future and also taking a bit of me time this Winter . . .

Hidden a noteworthy missive we'll get to in a  sec, we can see that she understands the implications of . . .

- The Feds Basically Camped Out At The Courthouse

- Dan Tarwater Domination Of the Legislature

Reality . . . The controversy over Caleb his truck and ambitions for his boss might have calmed down for a bit but that doesn't mean that there isn't continued underlying tension.

In a somewhat recent screed on the topic of Winter rest and New Year's Resolutions she noted . . .

"Some may have noticed I've been less engaged on social media recently. Taking this month to catch my breath and gear up for my third term in office. There will be notable changes at Jackson County, but sadly way too many of the same damned problems. I'm also mulling policy and personal priorites for the next chapter and excited about all of the possibilities. Please know how much I truly appreciate your support and friendship. Kick ass, take names, and never stop fighting for justice. Peace and love."

Crystal won three times. The unions need that lady vote and she has sold them on it. The Hillary card has word for her for some reason. Sorry TKC but she ain't going anywhere any time soon.

The next mayor after Jolie!

Who is this chubby?

With Crystal joining Slie and Frank the wish of Slie wanting the jail out of downtown will be accomplished.

What's up with the witch suit?

Why are they all so fat, or on the way to being fat.

^^ They are Democrats who have been feeding at the public trough.

This why the democrats are a super minority party in Missouri. How they run Jackson County and Kansas City, NO one wants them in charge of Missouri.

That mailer with her and Sanders in a pic together with "end the corruption" on it was funny.

It's pretty simple all these local politico's spend most of their time ensuring they and only they (and family and friends) advance and everyone else will basically spend their time or even entire careers running into brick walls.