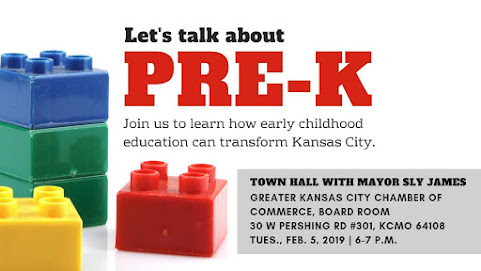 Just weeks before he's out of office, the Mayor wants to leave another "legacy" which is nothing more than one last addition to more than a dozen times he has worked to raise taxes in the past 8 years.

"We’ll talk about the plan and you’ll have an opportunity to ask your questions about the plan. Read more about the KC Pre-K Plan at www.kcmayor.org/pre-k"

THE SOLUTION: Fund high-quality pre-K for all KCMO children with an estimated investment of $30 million a year through an economic development sales tax paid by residents of and visitors to Kansas City, Missouri . . .
###########

KANSAS CITY EDUCATION AND COMMUNITY LEADERS OPPOSE THIS EFFORT!!! THE MEETUP IS A FINAL PUSH FOR THE MAYOR TO DEFEAT HIS CONSTANT URBAN CORE CRITICS!!!

This is a fight worth having inasmuch as there might be some real debate between the mayor's supporters and education leaders. And just to further confuse the issue . . .

Don't forget that KCPS wants a bigger property tax rather than this piecemeal gesture.

And so this debate isn't really about funding as much as it's yet another local power struggle to control purse strings for funds supplied by the shrinking Kansas City middle-class tax base.

more taxes aren't going to help the problems he's talking about. All they're going to do is create bigger bills and rising costs for the people who can afford it least.

it's math and Sly refuses to learn and sets a bad example for students.

Yeah, great idea, throw more tax money at cultural problems that are encouraged by the government officials who help create the problems to begin with.

Democrat cities, run by minorities have one and one solution only, gimme more cash and I will go buy an Escalade to make you feel better.


Democrats have always been about tax and more tax but the democrats in democratic run cities will never learn they will just keep voting them in until their city is nothing more than a sewer kinda like KC is becoming. It's really laughable.

Suck it up KC along with your quack quack mayor with his cardboard sign in the window of his escalade. idiots.

Doesn't the KCPSD already have a Pre-K program?
They certainly have received a large amount of Federal and State funding specifically for one over the past several years. If they do not have such a program, where has that money gone?

All of the other Metro Districts have this program, why doesn't KCPSD?

Pre-K prepares some children better for kindergarten, but has not been shown to have any lasting effect after that. In other words, there are no empirically determinable behavior or educational differences between kids who have had Pre-K and kids who have not had Pre-K.

Rather than tax the citizens how about lawyers, developers and projects receiving TIF money fund the pre K program.

LET'S TALK ABOUT THE LEAK FROM YOUR WALLET

Mayor James wants to forcibly take more of your money for a program that temporarily benefits a small minority of non-taxpayers, and has no lasting long-term benefits.

Lame Duck definition from the dictionary: an official (especially the president) in the final period of office, after the election of a successor.

The successor has not been elected. He is not a lame duck yet

No new taxes until city government learns to spend what they already have wisely. They're awesome at piling up debt, not so good with prudent use of funds.

They’re going to get a better start on their illiteracy and get free breakfast and lunch.

How about we just call him a lying lard ass soon-to-be lame duck?