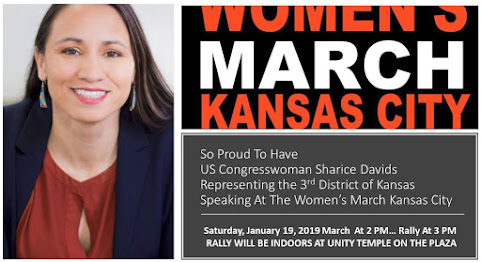 Today's local lady protest was moved indoors because of arctic weather conditions and has yet to answer controversy about the national affiliation.

In fairness, check the link to their event page and here's what they hope to accomplish in their own words . . .

"On January 19th, 2019 THE WOMEN'S MARCH (AND THE MEN AND CHILDREN WHO STAND WITH THEM) OF KANSAS CITY will raise their voices in solidarity with those all over the country to demand equality for ALL humans at the 2019 Women’s March Kansas City. Bring Your Hearts, Bring Your Signs, Bring Your Passion, Bring Your Voices, And Bring Your Marching Shoes. We encourage groups to come and walk for their causes. Are You Ready?

"Over the past year, basic rights for women, immigrants, LGBTQ+, people with disabilities, the religious and nonreligious, people of color and even Mother Earth have struggled to survive under the weight of the current administration. America’s First Amendment has been challenged, and healthcare for millions has been threatened. We must stand together to demand and defend our rights. Let your voice echo throughout Kansas City and show the world that red, white and blue are colors of tolerance."

So far no local media outlet has bothered to present a clear picture of the march that is slated to host Congress lady Sharice Davids along with Mayor Sly and Council ladies Jolie Justice and Alisia Canady.

Remember that the Democratic Party has dropped their sponsorship.

For those who have missed the controversy regarding the march, it's mostly focused on national leaders connected to Minister Louis Farrakhan.

Harper's: Should You Attend the Women's March?

UST: Debbie Wasserman Schultz: Why I refuse to walk with the Washington Women’s March

Time: Women First Marched to Challenge Trump. Now They Are Challenging Each Other

Mashable: Why local organizers support the Women's March despite controversy

SHOULD REP. SHARICE DAVIDS, MAYOR SLY AND COUNCIL LADIES ATTEND OR AT LEAST ANSWER CRITICISMS ABOUT THIS MARCH AMID THE DISPUTE OVER ANTISEMITISM?!?!?

Thanks to our AWESOME BLOG COMMUNITY we're the only newish source to pose the question whilst the rest of the local media cover the snow and the Chiefs game as they attempt to keep Kansas City stupid.

Sharice Davids won't answer questions from any reporter. She can only talk from a script. That is her instruction from her consultants. When she strays from prepared notes, she always gets in trouble.

Another PR Job by the politico's to make the sheeple think something is getting accomplished.

If Republicans attended a rally with antisemitic overtones, Democrats and the media would be outraged, but when Davids and Sly do it, they get a pass.

Sadly, there's a lot of antisemitism in the Democratic party. Many Democrats are pro Palestine and hate Israel.


And the democrats say that republicans are racist. The women's march is a hate group geared to attack Jewish people among other hate crimes like abortion.

What do the women do after these things? Go home and stuff their faces with donuts and pastries, knit hats, and wait for the mailman for their costco ads and coupons.

Native Americans hate the Jews for killing all of the buffalo.

Back when Jews opened up the prairies and built all those forts and Synagogues along the Bozeman Trail, the Lakota, Hunkpapa, Miniconjou and other Indian Nations swore vengeance against the Jews. The Injuns quickly learned to attack on Saturdays and often threw raw pork and cheese over the walls of the forts during long sieges to torture them.

The Jews ran all of the Indian Agencies that handed out "Polio Blankets" to unsuspecting Native Americans and in fact, it was the Jews who started making movies that depicted stupid Native Americans riding their horses around circled covered wagons where they were picked off by Jewish sharp shooters wearing Yamakas. Jews leveraged their conquest of the west into a Narrative that was and is the stanchion supporting their domination of Hollywood and the entertainment industry to this day. Sharice Davids would now, if it were not for the Jews, own Warner Brothers.

Sharice Davids has good reason to be anti-semitic along with Louis Farrakhan, whose people have suffered interminably under the Jews.

Facts are facts, Sharia Law is a great idea and when great minds and great people like Sharice Davids, Louis Farrakhan and Linda Sarsour get together it won't be long before, hopefully, all of our women, will be home, barefoot, pregnant in a black burka where they belong and not out on the fuckin streets in this weather.

When your knowledge and understanding of issues and public policy is as thin as someone like Davids', about all you have to "offer" is marching, selfies, photo ops with "celebrities", cable "news" spots with softball questions, and making believe that you're a part of accomplishments that actually belong to others.
It's sad that voters who claim to be so concerned about the direction of the country would elect a person who has never really lived in their Congressional District and so knows little about it, has never contributed to the health of their community, has done nothing in government other than be a low-level intern in a huge organization, has failed at business, and about who they really know very little.
She'll surface from time to time in one of the empty events listed above and be gone by the next election.
Only her groupies will be disappointed.

Will there be balloons for the kids?

To be accurate, the organizers of the women's march are primarily engaging in anti-white and anti-male rheroric while claiming that they are not anti-semitic but are merely pro-Palestinian. A lie, of course, but no such apologetics are being offered for the anti-white and anti-male hatreds, while leftist Jewish feminists are being offered the olive branch of being considered "not white" if they engage enthusiastically in hatred against whiteness.

Unity Temple has a 1200 seat capacity.
It will be interesting to see if they fill the place up.
Wonder if they will provide free cake, ice cream and abortions.

I told my son to NEVER date an American white girl.

Bring in an Asian chick from over seas. Or a Mexican chick. These American girls are taught, like blacks to hate us all for what? Unbelievable.

Ah yes, toxic femininity dripping with misandrous rage brought to you by the feminist military complex. Like the militant "woman" behind Gillette's ridiculous commercial, these man haters are being exposed for the mentally confused and fomenters of poisonous rhetoric that they are. It is so funny to see these deranged females self destruct. American MEN have had enough and won't take it anymore.

Being critical of some of the actions of the nation of Israel....DOES NOT make anyone an Anti-Semite. Jewish people need to stop tossing out this label when others disagree with them on international politics. Any US citizen has a right to criticize Israel if they choose without being accused of hating Jewish persons, Many Jewish persons in the US criticize some of the actions of Israel....are they to be called Anti-Semitic as well. A growing number of US citizens want to see a two state solution in the Middle East. Wanting that outcome does not manke them Anti-Semitic.

I don’t think the sponsors are dropping out over concerns of anti-semitism. I just don’t think they want to be associated with a bunch of stupid hateful cunts.

"Wonder if they will provide free cake, ice cream and abortions." Abortions will not be necessary. Their personalities are 100% effective birth control.

A person who's religion involves being a homo and chicken bones is too stupid to be an antisemite.

Stevie Rose the Jew was Sharice’s big supporter. I wonder what he thinks of all this? It’s Tony’s lucky day, a chance to run another “Steve Rose Says” piece.

Davids and Cleaver are there for only one reason: They're cruising for chicks who'll fuck.

THE DEFINITION OF BULLSHIT?

"Over the past year, basic rights for women, immigrants, LGBTQ+, people with disabilities, the religious and nonreligious, people of color and even Mother Earth have struggled to survive under the weight of the current administration."

Who believes this kind of bullshit?

THESE PEOPLE ARE INSANE and will PANDER to anyone.

Was your history from the long lost biblical book by Father Coughlin?

I have fucked quite a few Jewish women, so clearly I am not anti-semitic. I do not approve of many things Israel does.

A KS congresswoman attending a event in another congressmans district. Where is Cleaver? Why isn't she in Washington working on getting the shut down over with? This is why folks like me didn't like this lady in office. She isn't there to work for us she is there to serve her needs and wants.

Sharice does not have a clue as to what is going on around her and is just grand standing.

Who’s paying for sharice to come here? She said she doesn’t have any money for an apartment in dc she’s so broke. Is the city paying for her room and board, hotel and air travel?

The Lick-a-ho tribe took up a collection for her from the sale of buffalo hydes.

Wonder if anyone showed up. What a weak effort!

There won’t be anyone there anyway, except for a bunch of lesbians. Most hot women in Kansas City use Saturday as a day to spread their legs and get fucked all day.

^^^ and yet you're here Saturday posting on TKC and waiting for the next Victoria's Secret banner.

Keep both hands on the keyboard please.

But I have a hot bitch on her knees right here paying homage to my johnson. Smokin' some weed. Sippin' some Cutty's.
It's called multitasking.

News reported that 600 showed up for the Women's March.
That means 300. 50 of which were reporters.
There was a big sale on lumber at Home Depot today, so that kept the lesbians occupied.
I would have gone, but my pussy hat was at the dry cleaners.

5:20 is the most fake news I've ever seen in a single comment. More bigly than any Trump tweet.