It's Sunday and so a moment of contemplation on the big picture is in order . . .

Given pop culture Bible talk that's abundant during this time of year and always present in classic movies . . .

SPECIAL THANKS TO A TOP ECHELON TKC READER FOR INSIGHT INTO THE SHUT DOWN AND HOW RECONCILIATION OF THIS CRISIS WILL ULTIMATELY COME TO PASS!!!

For context, let's turn to The Gipper and his insight into the destiny of this nation . . . 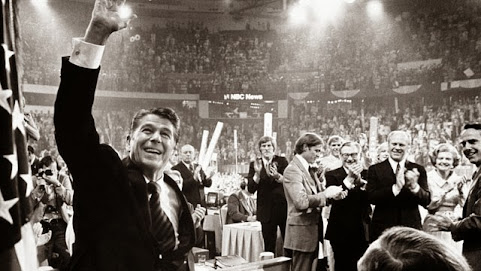 A historic moment from Prez Reagan's inauguration on the topic of faith life and politics . . .

First he declared how God sees America: “Can we doubt that only a Divine Providence placed this land, this island of freedom, here as a refuge for all … who yearn to breathe freely?”

He built a little more suspense. “I'll confess that I've been a little afraid to suggest what I'm going to suggest.” His voice cracked, “I'm more afraid not to.” He then asked the audience, and the nation, “Can we begin our crusade, joined together, in a moment of silent prayer?“

He bowed his head. The hall went silent for 13 seconds. Then he broke the stillness with his final words of the night, “God bless America.”

Accordingly and despite his pr0n-y past alleged misdeeds for which so many of us must also atone . . . Prez Trump's Administration has a part to play in this struggle of Biblical proportions. 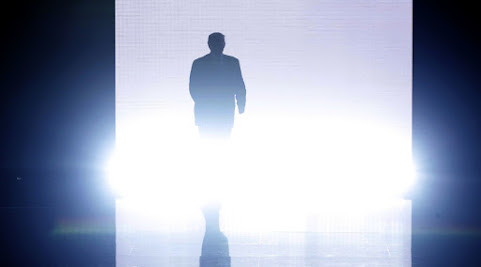 An inspired TKC reader reminds us . . .

"The border wall crisis has been foretold and it doesn't look good for President Trump or the nation. There are some who say that the border wall is a metaphor and that's only partially correct. It's spiritual symbolism. The American people, understandably, want protection from inequity and the afflictions that confront the rest of the world. But those evils inhabit the hearts of men and women -- They're not outside forces from which we can hide."

Here's the prophetic passage from Ezekiel 22:30 handed down according to the top echelon insider:

“I looked for someone among them who would build up the wall and stand before me in the gap on behalf of the land so I would not have to destroy it, but I found no one . . ."

So the fight over the government shut down and a smallish steel slat fence continues . . .

And it's also entirely possible that a 1 or two billion dollar compromise can force a push and we'll all get on with our lives.

Breitbart: GOP Rep. Brooks: How Much American Blood on Hands of Pelosi, Schumer Before They Help with Border Security?

Daily Mail: The Obamas have a wall around their home! Trump uses former first couple to argue for HIS border barrier saying the US 'needs the same thing, but slightly larger'

Daily Caller: Triple-Amputee Veteran Who Is Raising Money For Trump’s Border Wall Has A Fiery Message For Democrats

Fox News: Outgoing chief of staff John Kelly contradicts Trump in exit interview: 'To be honest, it’s not a wall’

Hopefully more for the morning update . . .

And this is why I read TKC. To freak me out on Sunday night. Nicely done, sir.

No reason to freak, have faith. We'll be back to handing out government cheese for everybody in less than 72 hours.

right or wrong, Trump did the right thing in getting out of Syria and Democrats should give him credit for it instead of trying to talk out of both sides of their mouths.

Regan was a bigger proponent of illegal immigration than any current Democratic Party member. His legacy makes nancy pelosi look like a member of ICE. God bless that old coot!

Bless Trump for trying. I wonder how all of his supporters will feel when the rest of the Republican party sells him out. It's already happening. At this rate we've got less than 90 days of the Trump presidency.

Santa didn't give Trump the votes so now he's crying about it. Sorry dude, you had a chance to get the funding but decided to gut healthcare instead. No wall, Trump is finished as a president with a mandate. It was fun while it lasted.

"And I sought for a man among them, that should make up the hedge, and stand in the gap before me for the land, that I should not destroy it: but I found none."

In regards to securing our southern border, all who have come prior to President Trump have failed the nation and it's citizens. There was not a righteous man in the land. All were corrupted and wicked.

President Trump has emerged to stem the tide of ruin and turn the fortunes of the people. The moral energies of the nation had been wholly exhausted by a false prophet who lay with men and prayed to Allah; it could no more put forth of itself a savior to retrieve its fortunes.

A protective border wall or a wall of lead --take your pick.

^^^^^^ No thanks on either, I'll just take all the profits from all that cheap chinese junk sold to meth addicts who don't have any loyalty beyond their big screen tvs.

It's the American way!

Hilarious. Thanks for the Sunday evening chuckle.

You'll never read this kinda stuff in MSM. Thanks TKC.

Trying to predict the fight over the border wall using scripture is a fool's errand. Some evangelicals have rationalized their support of Trump by comparing him to the Persian King Cyrus, who released the Jews from Babylonian captivity. Eventually the Temple was rebuilt and the wall around Jerusalem was completed under Nehemiah. Just google "Trump Cyrus" and see what you get.
The moving of the US embassy from Tel Aviv to the capital, Jerusalem was promised by several presidents, but Trump actually did it.

The greater biblical principal here lies with the moral character of the United States. This used to be a deeply Christian nation. Flawed as it was, both sides sought divine council during the Civil War. Now, Christmas is almost secular with even nominally Christian folks spending the day getting drunk in lieu of attending church. God has blessed us in the past, but may remove His hedge of protection because we have turned away from Him. This is how God dealt with ancient Israel.

I would say that the US is long overdue for God's judgement.

Every city in ancient and medieval times (including the Holy City of Jerusalem) had a wall around it.
Vatican City still does.

Trump is here to do God's work and to work on fulfilling His plan.
King David was imperfect, but from his line came the Redeemer of the world.
Trump is imperfect, as well, but through him God's plan is being fulfilled.

It's not that tuff.

If you don't vote against Democrats, your children will be living under the suzerainty of the "New Demographics" that will determine an entirely new lifestyle. No toilet paper, chaos, Jenny Craig will go broke, white people will languish under a Bolshevik-ANC type National Congress that will make today's tsunami of black on white hate crimes seem like the Halcyon, golden age of Pericles, leaders like Octavio Cortez will be considered too conservative and the last time you had meat for dinner, Bruce Willis had hair.

Sure, who needs borders?

Tens of millions of people have said all along the wall would never be built, only the gullible 38% of this country believed it. These are the same people for whom facts, science, and evidence means nothing to. Talking to them is more useless than talking to a great. Tell them Iraq had nothing to do with 9/11? Forget it, you cannot change their mind despite W publicly acknowledging it several times. Oceans are warming? No their not, thermometers are unproven technology. Guess what those libruls in Norfolk, VA have been doing at the world's largest navy base? Preparing for rising seas due to climate change. People who follow Infowars, guess which party an overwhelming majority of them belong to? The rubes can be fed any lie fed to them by anyone with an R behind their name. Why isn't Mexico paying for the wall? Where is that less expensive and better national health care program Trump promised? Where is that 10% middle class tax cut Trump promised? The rubes probably believe the military got a 10% salary increase because Trump said so. You fuckers are like Scientologists. You're in a cult and won't admit it.

And in a related story, did the burning bush have anything to say about renaming Paseo?
The revs are missing out!

Wages rising at almost 5% for the first time in generations.

Unemployment down to the lowest levels in 30 years.

No nuclear war with North Korea.

Energy independence thanks to de-regulation.

Trump must have waved a "Magic Wand", because Manufacturing jobs are coming back, 2,000,000 of them just last year.

Re-negotiated bad Nafta and European trade deals and is on track to spank the Chinese. That's a trillion dollars a year in total if he gets it done.

Hello pipelines and de-regulation that stimulated this great economy.

Tax cuts that DID put money back in family pockets.

Obama's main accomplishment, besides the "Apology Tour", was to fuck up Health care for generations to come and divide the country along the lines of race, back into the 1950's.

6:39 wants to go back to 1% growth and spending all of his money on Health Care for low lifes that vote democrat and don't work.

She is on the gubbmint cheese and thinks the bad ole Orange man will make her go back to work instead of sitting around all day looking at BET.


EZEKIEL 22:30 Means: Ezekiel and Jeremiah were faithful and were going build a wall but the rest of Judah was full of sin, so that is why they could not find anyone to build the wall, they had turned on GOD. The consequences....they were invaded and are still paying for it today!!!!!!

"She is on the gubbmint cheese and thinks the bad ole Orange man will make her go back to work instead of sitting around all day looking at BET."

It's not even up yet and it's working.


Caravans are avoiding the U.S. now and are going to Mexico to fuck everything up there. Brilliant strategy by Trump.

^^^ Yes but where are the Dems going to find and get any votes if all the "immigrants" stay in Mexico?

Surely Obama's wall is not to keep us out, it's to keep him in.

ISIS is eradicated? Exactly what I mean about Cult 45 members. Trump said it so they believe it. ISIS is not defeated. If Rush Limbaugh told you climate change was indeed real you would believe it but not hundreds of scientists. Again you are cult members and talking to a tree would make more sense.