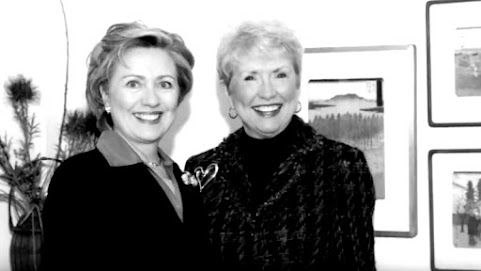 To start the early morning we offer a follow-up FIRST LOOK at local tribute to a woman who helped to shape Kansas City business and politics . . .

Remember that our blog community was FIRST to report an EPIC award to a local lady politico . . .

The Kansas Citian of the Year is the highest civic honor in Kansas City, and was presented to Mayor Barnes at the climax of the KC Chamber’s 131st Annual Dinner.

More background from the group:

Though, when first elected, some were skeptical that a woman could handle economic development, Kay Barnes has been key to the billion-dollar-plus revitalization still underway in Downtown Kansas City.

During Barnes’ two terms in office (1999-2007), Downtown’s revival began with the opening of the new H&R Block World Headquarters, the Sprint Arena and the Power & Light District. Other achievements included the Kauffman Center Parking Garage, improvements in the Crossroads District, the conversion of dozens of buildings into lofts and apartments, with thousands of people moving Downtown. Many say she brought a new momentum to Kansas City which continues today.

Here's the TRIBUTE VIDEO DEBUT in her honor . . .

And so we highlight this 2018 tribute that certainly resonates across our discourse and shapes Kansas City now and probably years into the future.

Good jeebs the chamber is really pushing her. Hope she is not going to come out of retirement. I can tell they want her to declare the next mayor of Kansas City and hand over the crown. Kinda strange. She's in her 80s and still hasn't finished working for them.

If Cindy doesn't get in, Jolie will get Kay's love and blessing. and that'll be it.

I may not agree with her but Kay was the best mayor we had since Berkley, she did what she had to do and at least kept the crime rates lower than these other so-called leaders because she didn't second guess the police at every turn.

Pure revisionist claptrap. Kay was the TIF queen. Compare our infrastructure pre and post Kay. Our streets are a mess, the water lines still need upgrading. A good mayor makes the hard choices for the future. Kay was all about looking good and cocktailing with the right people. The Star provided cover for any little thing she did. What a joke. I can't believe people fell for her BS in the first place, let alone are applauding her 20 years later. City Hall has never been in worse financial shape, and the profligate spending and postponement of city maintenance can be traced straight back to her.
Oh, well. The people get the leaders they deserve.

Absolutely right Cee Bee, funny how folks try to rewrite history to cover up bad decisions and choices. She was a lousy mayor, gave away the farm while the city crumbled. And now after a few more inept mayors this city is still crumbling. Until a really strong person comes along to get us on the right track, we will continue to deteriorate. Stop the fluff projects and fix he city infrastructure! Stop driving away taxpayers with your poor decisions and high crime. Do something!!!

Not very smart Kay Barnes is the one
who threw all the section 8 apartments on armour and created crack corner took central Hyde Park property values down and created a shooting range on armour.

i fucked kay before she was mayor.

She still living large at Briarcliff and driving the Mercedes?

She did a great job kick starting KCMO's fall from grace into a wretched cesspool.

It was the streetcar that spurred billions in development. Not this old geezer woman.

She probably has a new Mercedes by now.

She left the city an enduring legacy. Of debt. And she established the enduring policy of letting global warming take care of clearing the streets in winter.

She is truly a piece of work.

Oh really? Tell us about it. What are the details?

She was the best thing that ever happened to KC. Downtown was a scary mess before she transformed it. We need her back.

^^^ I'd like to have two dozen sugar donuts delivered to your home so you can continue to offer your clear headed perspective.

She did a good job creating Killa' City

The Chamber never supported Kay Barnes. They tried to get Karen Pletz, KCUMB grifter, to run against her after her first term!

Karen Pletz — she of the spiked, blond hair and surgically altered face

Look she's 80, obsolete old school, looted taxpayers and feathered her own nest, and sitting pretty with the exception of the fact time is not on her side. She's a politician.

CAN YOU SAY "REVISIONIST HISTORY"?

"Downtown’s revival began with the opening of the new H&R Block World Headquarters, the Sprint Arena and the Power & Light District."

FACT: You can pave the streets of Downtown with gold IF government is willing to SCREW taxpayers bad enough.

HR Block is a mess, in a troubled business model.

The Sprint Arena was sold to the public with the promise of an NBA/NHL franchise. It was turned over to Anschutz Entertainment.

The Power and Light District (Baltimore's Cordish Company) continues to be one of KCMO's biggest BOONDOGGLES (and that's saying a lot!). For years to come KCMO will remain on the hook for millions of dollars each year to cover the Cordish financial shortfalls. And each year, KCMO politicians receive financial contributions from Cordish to turn a blind eye and fill the Baltimore company's cash register with millions of dollars in subsidies.

@ 7:33 She never did live at Briarcliff!
That was just a fiction she set up with Chas. Garney when she wanted to run for Congress. She listed one of his empty places in Briarcliff as her residence to satisfy campaign requirements, but continued living in Brookside.

When she suffered such a humiliating defeat, that fiction went away.

The Sprint Center opened in 2007, anchoring the east end of the Power and Light District.

The Sprint Center replaced Kemper Arena (just a short distance to the west) which opened in 1974. The city sold Kemper Arena for a nominal $1.00 to redevelopers, even though they were still paying off it's long-term debt.

By using a 360-degree all glass exterior, city leaders failed to consider the preponderance of gunfire in the Downtown district.

Stan Durwood tried for 25 years to redevelop the P&L District.
The consultants and power brokers would not support Durwood.

Stan Glazer was only visible candidate against Barnes for re-election.
Ask Teresa Loar about her vicious attacks against Stan to protect Kay and John TV.

Garney made several sweetheart giveaways in Briarcliff West.
Can anyone spell Patsy Ann Danner?
A Pulitzer Prize may await any writer who exposes the corruption and political giveaways to Garney.

Rubbing elbows with the modern day queen of thieves Billary Clinton tells you all you need to know.

What a shame for you. I suggest therapy.

Meanwhile, even those of us who adore women find Kay Barnes to be one of the worst examples of the obvious corruption and crony capitalism in KC.

I'm all right with Kay Barnes. She started a needed revitalization of downtown. I don't agree with the last 10 or so years of city management like the street car and stuff, but downtown was a shithole pre-2008. It's night and day now.

We needed the sprint center because Kemper sucks and has always sucked since the beginning. The P&L has added a a good place to help keep the big 12 tournament a cool place. Kids who are now in their 30s are living in a world where the P&L has been a legit place to go out on the weekends for their entire adult lives. There's a lot of bad shit that is going on downtown but Barnes contribution as mayor is easily the least worst. Had we been stuck with someone else like Cleaver or Funk, we'd be in St. Louis territory

lol st louis says the same about stick- built shit all over this town that has always been the case.

half of P&L looks like it was constructed by chipolte.
Durwood wanted a huuuuge big box mall with sky walks.

how many times can a town use the descriptive term 'crown jewel".

I don't think anyone is against downtown revitalization, but it's a question of who pays for it.

Let private developers work their magic with their own private financing, not public taxpayer giveaways.

KCMO politicians and administrators have taught developers to NEVER do anything without tax dollar freebies. And they've learned the lesson well. Developers bribe politicians for favored status and project approvals with loads of taxpayer money attached.

KCMO is desperately broken and corrupt.