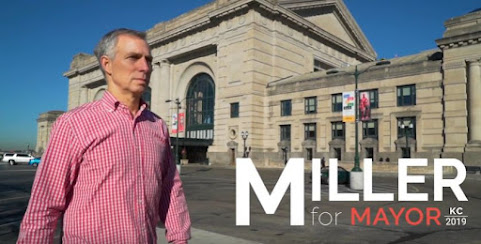 He's lived in Kansas City for all of his life and he's one of the more important local lawyers but most people don't know about his work.

Nevertheless, in 2018 KCMO attorney Steve Miller has amassed an impressive Kansas City war chest and seems to have found his niche among residents who have grown increasingly resentful of 12th & Oak political bickering but still don't want to stray too far from local civic leadership.

Here's a quote of his latest pitch as this local suit tries hard to look casual and comes away with a decent commercial that, again, is powered by soft piano in the background . . .

"As a lifelong Kansas City resident, civic leader, and business owner, I have dedicated my life to giving back to the city I love. It has been a driving force in my life for decades."

"Steve Miller makes an impressive argument for candidacy as a volunteer, businessman and resident rather than just another politician."

He's not on the council. That's his biggest advantage.

Better title: If he's a lawyer, then why is he dressed like a farmer?

He's a white male in a Democrat City.

If we're going just on looks then yes, I guess that he cuts a more impressive mold than most of the candidates on the council. But what I think that KC is learning is that we can't have another 4 years of a mayor that's focused solely on development. If you look at his campaigning so far and the money he's getting from lawyers, you'll see that Miller is mostly focused on KC projects not the community as a whole. We've tried that to the detriment of neighborhoods across KC.

He might win if her wears Black Face, or lies about his "23 And Me" test.

Combine the charisma of Funkhouser with the ethical integrity of James and the political principles of Lucas, and you get Miller.

Kraske says Jolie Justice is the leading candidate, and we all know how accurate Kraske's predictions have been, so I guess everybody else should drop out of the race right now, so Jolie has at least SOME chance, right?

Of course, just like Miller, she'd probably come in second in a one-person race, but all the "Oh Hell NO" write-in votes would be tossed out and either of them would win under those circumstances.

He and Elizabeth Warren watched "To Kill A Mockingbird" 12 times in a row at the Little Big Horn, therefore, he is actually, a Black Indian and should be sworn in as Mayor at Polsinelli on Emmett Till's birthday in warpaint and a Chief's Head Dress while singing "Kill The Boer".

Go on take the money and run

He should rub lotion on his dick and hide it to win, or, he gets the hose.

0:11 - Ah another smiling "strap hanger" that should immediately disqualify him.

^^^ Take a lawyer to lunch on the toot toot.

Caption for the picture at the top.

"June says that either Wally or the Beaver spilled oatmeal on the carpet today, there will be heck to pay when I get home."

Hey fuckhead, u need a shirt.

He's white and kc has had it with enough Slappy Whites that pander to one or two races.

10:24 That guy is even too white for me. He looks like he uses Cocaine for makeup.

The geezers at 0:10 in that clip seem to like him.

^^^ Old white money. Screening committee who decides who will be next mayor. Sly was their last choice.

Maybe LeBron should run for Mayor, he is qualified.

Every now and then, a couple of hours will go by and you will forget how stupid black people are. Then, this happens.

sWEET of Tony to profile Steve Miller, so at least he can say, I told you about him.
Totally forgettable. That does not play in a mayoral race. This video is so boring, I need a nap. Did he hijack aerial footage from an EDC video? Or Sly's appeal to land Amazon HQ2 here?

What's Miller for? What's he against? (and remember, most people vote AGAINST something or someone.) The challenge will be, he is against Jolie Justus. But as we saw in Joco with Kevin Yoder, in the MeToo era, white "church usher" nice guy Mr. Cellophane personality types are loathe to go after any woman, especially a person who can't really make it at their law firm.

(And you thought I was gonna say lesbian!)

Miller's closing graphics show Union Station. The totally subsidized failure of a building. BiState I:The only time Joco rescued anything in KCMO. (Note, I ran the campaign to defeat BiState II/the failed Hunt subsidy of Big Soccer and Big Shirley Helzberg /symphony. I worked for free...outspent 112 to 1, but we handily defeated the millionaires.)

Union Station, after the bailout, had to bring in the US Post Office and the Chamber and the EDC to take up spaces and pay the heating bill with taxpayer dollars--because the Science Museum is moribund. Oh I forgot: the Fringe Festival offices there...

So--Miller's video finale shows a failed real estate project. Par for the course of a construction lawyer, I guess. ABC--Always Be Constructing...

And--I did love the irony of right after his YouTube video plays, it auto-rolls to a completely disparate video, "How to remove a stump."

Who says God doesn't have a sense of humor.

I don't think alot of KCMO voters will be mailing Miller any checks. Nor will Tony launch a GoFundMe for the campaign. He already gave at the office, with this post.

Ummmm. Thanks for sharing, Tracy. Between you and Chuck this morning I don't know who's had more Christmas punch. Or LSD.

He's not a career politician. How many of the other leading candidates can say that? None.

His robot left a message on my answering machine yesterday.
Not a good way to get my vote.
Plus the fact that my area is in the unincorporated area of the county and I can't vote on the KC mayor.

FYI, Axiom got him as a client.

Is this the guy with the band?

Classic overfunding of a non-candidate. Justus should love that he's in because he'll split votes with the Scotts for 3rd, 4th, and 5th, pulling them all down and propelling her to 2nd behind Lucas.

Lucas matches up much better vs. Justus than he does any of the white guys, so I guess he should love that Miller is in too. Ironic that the only guy who hypothetically stands a chance at beating Lucas ends up making his path to victory that much easier.

Chuck is on fire, and Tracy is back!
It's a good day in KC.