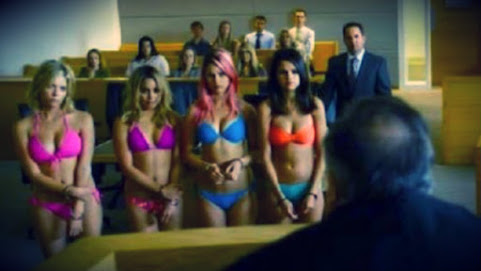 Promo photo from a cinematic classic the speaks to our blog community. Locally, here are more than a few news links on the topic of alleged crimes worthy of consideration:


Good samaritan recalls night of Kareem Hunt's incident at The 9

CLEVELAND - New reports say the Kansas City Chiefs organization had knowledge of multiple incidents involving star running back Kareem Hunt, including the alleged assault that occurred in The 9 back in February. That night, the only person who was cited was a man who helped the victim of that assault call 911.

A woman who alleges that a trainer slapped her forcefully on the buttocks during a fitness class at Title Boxing in Lenexa has filed a lawsuit in Johnson County.

A Kansas City man who told officers he was planning to kill someone and was "kinda glad you guys got me" because "I was about to go away for a long time" has been convicted of a federal firearm crime. The Kansas City Star reports that 36-year-old Seneca Harrison was found guilty Monday.

A woman accused of driving two men to a Hutchinson home to rob the resident of prescription drugs was bound over Monday to face trial in that case - and then ordered to serve seven years in prison after the judge revoked her probation in for two other cases.Reno County District Judge Joe McCarville found probable cause to order Amanda Gresham, 32, to stand trial on counts of aggravated kidnapping, aggravated robbery and aggravated battery for the Oct.

INDEPENDENCE, Mo. -- A man is in court Tuesday in a case that's linked to the shooting of an Independence police officer. Joseph Wyatt is charged in a robbery from March of last year that left an 82-year-old severely beaten and Officer Tom Wagstaff critically hurt.

Get A Whiff Of The End Of 4th Amendment


Officers can use smell to justify search of homes, KS Supreme Court says

A divided Kansas Supreme Court has ruled that police can rely exclusively on their sense of smell to provide probable cause to do preliminary search of a home for drugs. The ruling came in a case where Lawrence police entered a man's apartment to search after saying they detected a strong smell of raw marijuana.

A 37-year-old former pharmacy technician at the University of Kansas Hospital was placed on probation for stealing drugs from the hospital. Federal prosecutors say Heydon White, of Stillwell, admitted that he stole the painkiller fentanyl from cabinets at the hospital. He was responsible for stocking the computerized cabinets and removing expired medication for disposal.

A $1.6 million bail was set Tuesday for an alleged serial rapist accused of attacking four women who were strangers to him at gun or knifepoint since 2015. Daniel Meridy, 34, was arrested Monday in the attacks, including an incident two months ago where he is accused of placing a knife to a woman's throat after spotting her on a Central City street and promising to give her a ride.

That fucking rapist deserves to get it in the ass with a broom stack.

But I am shocked that his is BLACK!!!

Then if you refuse to submit to a baseless, warrantless search, they could shoot you.

If you want more comments your going to have to dial back this stupid captcha Tony.

How can they charge a guy for shooting wag staff when it was friendly fire, doesn’t matter anyway, mean jean will fuck it up.

"Officers can use smell to justify search of homes, KS Supreme Court says"

Your tax dollars at work.

If Jackson county did their jobs this rapey black would and should of been in jail already but per Jaco screw ups he rapes other women, well, thank god he got caught somewhere else because now he really is going to jail

Why did this woman wait over a year to sue over her ass slap. Maybe she liked it!