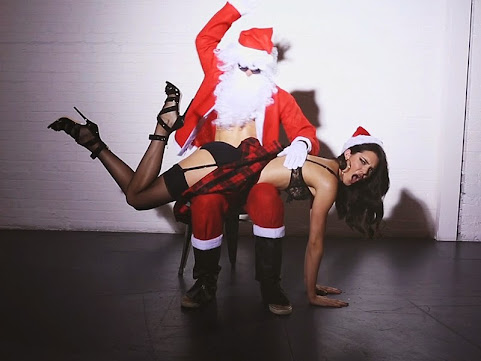 There's a lot to dislike about Secret Santa but for tonight let's make it quick . . .

Secret Santa turns everybody on Kansas City streets into a potential beggar and touts chump change charity from some rich guy as the solution to systemic problems that impact local life from po'folk to the fading middle-class.

We'll have more on this later but for now it's worth noting that the rising threat of real life U.S. class warfare still isn't enough to convince local news to stop celebrating some rich dude and his crumbs gallivanting around town.

KCTV5: Secret Santa slips $100 bills to strangers in the metro

And so, we invite our blog community to think critically about the this local tradition as we share some big picture news links for tonight.

Salon: Only in America could a decline in life expectancy not seen since 1915 be written off as individual character flaws

InsY: The Roots of Economic Inequality

NYT: The American Dream Is Alive. In China.

Brookings: Who makes the rules in the new Gilded Age?

The Week: Capitalism is working as designed

The middle class isn't dying. It's sad to see people believing shit like that. Our standard of living has become so high over the last 50 years that it has simply hit diminishing returns.

^^^^ There is no such thing as middle class. Just a rumour made up by greeting card companies. You need to stop listening to fox news. It makes you seem like an old stupid geezer.

I always thought secret santa was paying for sex.

Nothing wrong with that!

The middle class is still living paycheck to paycheck?

I thought Trump fixed all this. Didn't we all get big raises?

The trumpster can only do so much. At a certain point you got to do for yourself. But the government can't get in the way. You got a free the people up so they can move I call for a proclamation Across the Nation to sell Azz and weed and crafts on etsy! We can make this economy great again with juiciness of all kinds. It's just a matter of time until we open this thing up pull it out get it right and get it in!

Im surprised the city isnt going after the recipients of this money to tax them. In fact, it wouldnt surprise me to see this city council and mayor propose a text message tax in KCMO. You get taxed per text sent in the city limits....to pay for corporate welfare they slobber over.

Hey there , let's go Christmas shopping on the douchebag plaza and get shot !!!

Here are a bunch of Democrats at a 100 million dollar wedding.

How long before Secret Santa gets carjacked, robbed and shot.

Amazon, Facebook, Google having absolute monopolies is NOT capitalism, in fact, it's BAD for capitalism. The government is going to have to intervene.

In free enteeprise economies, efficient and profitable businesses grow by assimilating less efficient ones. Those with some warped sense of fairness cry FOUL and brand it a Monopoly.

How many of you SJWs never spent a dime at Walmart? Thought so, snowflakes.

You're an idiot, Gus. You are an armchair economist. Clearly watch cable new business shows -- they are just as opinionated and fake as other outlets. No economist or economic adviser would agree with your assessment.

Government supported Monopolies are a core tradition of the American Economy, starting with the canals and railroads.
If you don't believe this, buy electricity from the "other" Power Company when you start tour own TV Broadcast Network.

Monopolies are the logical end result of all forms of Capitalism.

7:58---Of course he's white how many minorities do you see going around handing out money.

Santa lined up the extended Kardashian Klan and demonstrated how their ends justify his means!!!