NEWSFLASH!!! EVEN WITH $25-MILLION FROM THE FEDS, KANSAS CITY MUST RAISE TAXES FOR NEW BUCK O'NEIL BRIDGE!!! 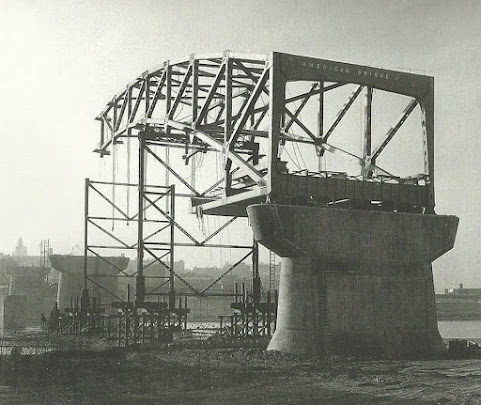 Today's celebration from newsies who don't know this is a QUARTER OF A BILLION DOLLAR PROJECT . . .

KCUR: Kansas City Is One Step Closer To Replacing The Buck O'Neil Bridge, Thanks To A Federal Grant

Sadly, the old & busted bridge was kept out of the limelight until AFTER KCMO passed GO Bonds.

Even worse, without a fuel tax in Missouri . . . Broke-Ass MoDOT isn't going to fix it.

And so, sadly because bringing back the old toll bridge won't work . . . This should be one of the next big tax increases coming up for a low turnout election.

TOP PHOTO -- A BRIDGE TOO FAR

After being repeatedly lied to by Mayor James and Council member Justus, citizens detonated the span to the single-terminal airport project!!!

Maybe they could start charging on the toy train and use it for the bridge.

They can’t get a simple airport built let alone a bridge, after 5 yrs of delays the new bridge will cost 12 trillion dollars and the taxpayers have paid the builder 750 million for a.............. drawing!

And it won’t cost the taxpayers one thin dime! Hahahahaha!

It will always be the Broadway and Paseo bridges.

"wow who'd you steal that photo from"

Actually, I think it's the library. And it's free.

I'm thinking we need a tax boycott in KC. Too many levies are drowning KC in debt.

Tell the next mayor to pay for it!

Why do you think people commute forty plus miles to the City's to Work. Do you want to live in Cities with High taxes and a high crime rate. Or A Peaceful small town with fresh air Friendly people. And the law inforcement in the small town can keep the bad guys and gals in check.

Bring Lurch back to investigate Sly - he has his own consulting gig and knows where the bodies are buried. Save time.

sLIE will just give it to his developer buddies