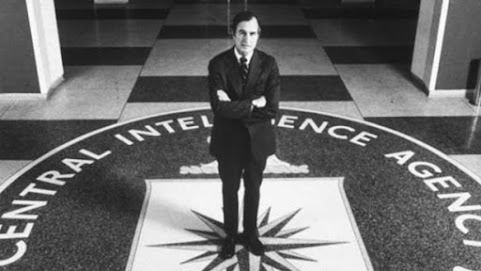 Most of the mainstream news today will sanitize the legacy of President George H.W. Bush into sentimental mush that nearly canonizes the former CIA spy.

Only the students of history will remember a near war crime "highway of death" in Iraq wherein women and children died along soldiers over a fake video game war that was fought against former ally Saddam Hussein and ultimately gave rise to Osama bin Laden and 9/11 blow back horror.

REMEMBER THAT GEORGE H.W. BUSH WAS PART OF THE ADMINISTRATION THAT HELPED CREATE OSAMA BIN LADEN!!!

His time at the CIA is underplayed just as much as his dementia and accusations of #Metoo harassment near his the end of his life.

AND NONE OF THIS DETRACTS FROM A TRUE STATESMAN WHO MIGHT BE ONE OF THE MOST REMARKABLE & CLASSY PRESIDENTS EVER TO SERVE!!!

The legacy of former Prez Bush towered over both that of his son and all of his successors. The last President of the Greatest Generation championed not only compassionate conservatism but a brilliant vision of the American people that was truly noble.

Check the links and more importantly we want to know YOUR opinion . . .

Time: George H.W. Bush Accomplished Much More as President Than He Ever Got Credit For

WSJ: ‘A Man of the Highest Character:’ Praise Pours In for George H.W. Bush

A class act from what we have today.

Galactic missteps on the International stage that created a vacuum in the mid east for radical Muslims to fill. Their incompetence internationally was equaled by Obama's incompetence on a national level.

Clinton was a decent president, maybe a C plus to B minus.

From 2000 to 2016 Americans have languished under the leadership of the "Deicider" who Cheney led around by his nose and then, Obama, a black nationalist ideologue "Pen And Phone" idiot, whose abject lack of intellect when it came to economics would embarrass a 2nd grader from the KCSD.

Bush 41 made 2 huge missteps, the "No new taxes" and not finishing the invasion of Iraq and eliminating Hussein the first time.

If it weren't for those 2 things Clinton and Obama would have never had a chance to advance to any political office beyond Arkansas and Illinois.

“I believe the time will come when trade will be free from Alaska to Argentina,” GHWB

How perfect is that? He dies on the day NAFTA croaks and Alaska and Argentina are both in the news.

The Globalist cucks will make this into a week long event that will seem to NEVAR end. The media will turn this into a a "Hate Trump" extravaganza.

Read up on it, chuck

^^^ who gives a fuck, quit being a grammar queen bitch

Bush senior is responsible for the entire mess in the middle east and Americas longest war. He has ans continues to cause more death and destruction than Adolf Hitler. May all members of the Bush family rot in hell.

I make negative comments on here from time to time.

However, the above comments regarding a perfect example of one of Tom Brokaw's
"The Greatest Generation" make me ashamed of my fellow countrymen.

I have serious doubts if today's soyboys and sjws would stand up when this country (they seem to hate) needed them.

Now I'll wait for geezer hater to post another of his inane musings.

George Bush Sr. is the face of the dark government take took over when they killed Kennedy. He and his buddies have raped the us tax payers while killing and ruining countries and lived around the world. The foundations of his dark legacy still control this country that is why "they" hate Trump, he is not one them. Trump deserves all thinking Americans support, he may be our last chance to escape the World cabal that is trying to destroy The United States. I second the ROT IN HELL bush and all your followers.

Don't forget that the CIA developed Crack Cocaine under his leadership, and that "crack" flooded the Country during his Presidency, pouring in through two States, Texas and Florida, both of whom (just coincidentally,) had Governors who were his Sons.

OFF THE TOP OF MY HEAD

Son of Sen. Prescott Bush. Prescott became a go-fer for the Harriman family (Brown Brothers Harriman) and was charged with aiding the enemy (Nazis) in the 1940's.

He was never given a nickname by the pilots he flew with, he was "George" (not "Ace" , "Speedy" or so forth), and had a reputation for being cold and distant from his peers.

On the mission in which he was shot down, he was given a nickname. When a plane was hit, the pilot was ordered not to bail out until he had been given the codeword "Chutes", indicating that the Navigator and Bombardier had bailed out. The Pilot's canopy blocked the rear canopy when opened, and prevented the others from jumping. Bush claimed to have heard that codeword before he bailed out himself, but no one flying with him saw any parachutes or admitted to giving the "Chutes" transmission. After this, his nickname was "CHUTES"!
After the inquiry, it was a question of whether to give him a medal or a court martial, but since his Father was a former Senator and Ambassador, the Navy decided on the medal.

It may be significant that this was the last mission he flew, since everybody in his unit refused to fly with him again.

It is possible that both the Navigator and Bombardier were killed when the plane was hit, but they were certainly dead after the plane hit the Ocean.

He played golf full time his final year in office while the economy and peoples lives were falling apart and huge lines of unemployed people were forming around the block to apply for one single job opening.

However, on the plus side, he did label the Republican Core Economic Theory as "Voodoo Economics", and did say it could never work!

Bush within last few years expressed a "great regret" that he had done nothing to assist the two other men who died in the torpedo bomber.

First heard this from a WWII Air Corps veteran of the South Pacific many years ago.

Bush heroic ditching of plane short of carrier is on film and is a myth.

Once again, Chuck nails it! KUDOS! "Poppy" was no hero. A deep state operative from the beginning. Over time the beginning of the end of the American Empire will be placed at "Poppy's" rise to POTUS.

First, let me preface this with i am a Republican. I am however more of a Teddy Roosevelt, Dwight Eisenhower and Ronald Reagan esque Republican. Everything said on here about Bush is correct. Prescott Bush worked with Wall Street Banks and funded the Nazi's and the U.S. during WWII. Look it up folks. I am more than sure there are other skeletons but will leave it at that. The SOB should have been tried and hung for treason against the U.S. but instead is elected Senator??? Now on to H.W. there is plenty of evidence that he was in Dallas the day Kennedy was killed but asked years later and could not remember where he was that day. ARE YOU KIDDING ME?? A president is shot and you can't remember where you were? Ironically he was deep in the C.I.A during watergate and was even chosen to run it in 1976. Did you know he received a daily C.I.A briefing up until the day he died? Most leave office and could give a shit. FYI we went into Kuwait/Iraq the first time because H.W. had oil wells in Kuwait that Saddam set on fire. Then there's W. Well we're still fighting his war. Glad his friends got rich. Say what you want about Trump. At least the crazy bastard hasn't put us in another war. If you want to see the swamp, i give you the John McCain funeral. The sooner the Bush, Clinton and Obama crime families are eradicated, the better

Outstanding post, 10:18. My late grandparents were part of the “greatest generation,” and I often think about what softies and whiners we have become as a nation. Theirs was a degree of patriotism and participation that, sadly, will never be seen again.

The Rothchilds baking family plays the world like a fiddle, the Bush family are all in the band.

Kennedy wanted to audit the Federal Reserve. Saddam was planning on establishing a gold backed pan Arab currency, Gaddafi was planning a gold backed pan African currency. Trump has mentioned auditing the Federal Reserve and has stated his dislike for the war in Afghanistan and that the Iraqi wars were the biggest mistake this country has ever made.

Trump like him or not is on the citizens side of this deluded nation. He is likely our last chance at becoming America again and not continue to become more and more a vassal state to the European banks. Pray for him he is on OUR side, few others in the government or the press are.

Thanks for bringing back the British concept of a royal family to America. Unelected Barbara advocating pro-choice from the east wing, while grooming Fredo and Michael as governors and taking their turns at the presidency. Now the grandchildren are lining up. Yeah, thanks HW.

BTW, Dubya did "finish" the job in Iraq. Well, he tried to and we see how disastrous a power vacuum is. Bush left the job unfinished after 6 years of combat and thousands of dead Americans. The choice of coming home or marching to Baghdad in 1991 is false. The correct decision would have been not to go at all. No invasion in 1991 or 2003 would have been the right call.

Here's to old man Bush being on the business end of the Devils c__k for eternity.

It's God's punishment on Bush for selling his soul.

1) GHWB was not a member of “the greatest generation”. That is a false concept. If there’s is a greatest generation it was pres Lincoln, generals Grant, Sherman, Sheridan, Nathaniel Lyon, etc who whipped the slave power in the War for the Union 11861-1865.

2) don’t we all now know what a crock of shite the gulf war of ‘91 was?!?! It was the war that made Americans love war. Big deal if saddam owed the Saudis money and was taking oil from Kuwaiti side of an arbitrary border in the sand drawn up in the waning days of WWI. As if Kuwaiti sovereignty is worth a damn. What about Syrian sovereignty? Libyan sovereinty? We have been attacking those countries. A question for you war mongers: how many ISIS fighters are rich assholes carrying Kuwaiti passports? Thousands. Thanks to the post Cold War US, the Christians of Iraq and Syria have been decimated. It didn’t take long after the USSR collapse for America to start a war and create chaos did it? NATO wars have created thousands of migrants that have islamicized Europe - way to go American empire! new world order! We’re exceptional!!!

What is this 'deep state' bullshit? The same people that talk about 'deep state' typically think Trump is a fucking genius - maybe he is, if he was able to get enough of you fucking idiots to vote for his inane, inarticulate, childish, draft-dodging, cowardly fucking ass. Morons.