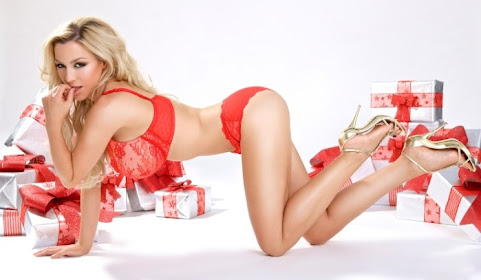 Fitness hottie Jordan inspires this morning news blast on the damage that season's eatings will do for the next 48 hours. Checkit:

Daily Mail: The shocking truth about how much exercise it REALLY takes to burn off your Christmas dinner

Express UK: From Baileys to mulled wine – the shocking amount of Calories in your Christmas drinks

Closer to home and with a bit more realism, here's the local news links that start our Monday. Take a look:

KANSAS CITY, MO. - A man who once shot someone at Oak Park along Agnes Ave. between 43rd and 44th streets in Kansas City, Missouri, is making the most of a unique second chance. Perry Dixon is only serving two years of probation for the non-fatal shooting thanks to a mentoring program, which offered him an opportunity to turn around his life.

KU Med delivered some holiday cheer to transplant patients Friday. Staffers decorated and delivered small Christmas trees to patients in the transplant unit. Some of the patients won't make it home for Christmas, so staff brought it to them.


Woman thanks first responders in Lee's Summit who helped her mother

LEE'S SUMMIT, MO (KCTV) -- On Friday night, a daughter thanked the first responders who answered her frantic call for help finding her missing mom. Her mother had a diabetic emergency while driving and was so disoriented she couldn't describe where she was at while her blood sugar levels dropped.

StoryCorps' MobileBooth came to Kansas City to collect the stories and memories of residents. This is one in a series of stories KCUR has chosen to highlight. Matt and Abby Anderson had only been dating a few months when the accident happened.

SEATTLE - It started by chance. Marshawn Lynch of the Seahawks pulled off one of the greatest runs in NFL Playoff history in 2011 against the Saints. The play registered in the minds of Seattle fans everywhere. It also registered literally.

Sound Of The NextGen


Lawrence's LK Ultra Ushers in a New Generation of Punk

LK Ultra is the most punk band in Lawrence, Kansas. Yes, Young Bull is louder, and yes, Stiff Middle Fingers is faster. But when it comes to the core principles that make a punk band punk, LK Ultra checks nearly every box. Their Instagram bio describes LK Ultra as an "indigenous-fronted queer indie rock band."

Perry Dixon is now attending church and each night is reading bedtime stories to all of his 23 younger siblings.

Jordan invited me to dive into one box early before Christmas morning!!!

Dude shoots someone with a GUN and does zero time and only 2 years of probation?!? Here let me save you the trouble:

JEAN PETERSUCKER-BAKER is the worst prosecutor ever. Seriously wtf is wrong with her?