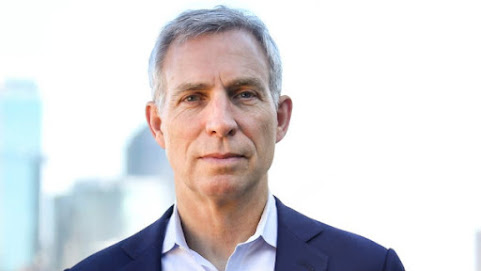 Attorney, mayoral candidate and part-time James Bond movie villain Steve Miller might have a better chance at earning the top job at 12th & Oak than most believe . . .

Election history favors a candidate from outside council chambers when the race is exceptionally crowded.

More importantly, he's taking the fundraising fight seriously and has raised more money than any other candidate in the past year. He now stands a close second to Councilman Scott Taylor.

STEVE MILLER'S CAMPAIGN MOVIES MAKE A PRETTY GOOD CASE FOR HIS CANDIDACY IN A STRAIGHT-LACED KIND OF WAY AND AMONG LOCAL SUITS!!!

Reality, his target audience is the Greater KC Chamber and local biz people -- So far he seems successful in that strategy.

Take a look at his front page clip:

"As a lifelong Kansas City resident, civic leader, and business owner, I have dedicated my life to giving back to the city I love. It has been a driving force in my life for decades. I’m Steve Miller and I’m running for mayor of Kansas City. Let’s build tomorrow together."

And then a more obvious project based plea . . .

"Our public leaders have an obligation to be good stewards of your tax dollars. That money doesn’t belong to politicians; it belongs to everyone in Kansas City. As your mayor I’ll make certain our projects finish on time and on budget. I’m Steve Miller, and I’m running for mayor of Kansas City. Let’s build tomorrow together."

DOES STEVE MILLER WIN THIS ROUND IN THE KCMO MAYORAL FIGHT???

Probably a better option than Jolie.

Look at the campaign finance reports closer T. If you count this year, Miller is actually ahead of the game when it comes to raising cash and he has a wider array of donors from lawyers and a few of the former elected officials that you already have reported.

What, are we at about more than a dozen candidates so far? Still a month left before the deadline.

This should be fun to watch.

Sorry. She will win because she's got Sly and every elected official in KC backing her. Contest over. Sorry T. This was entertaining but not practical.

^^^^^^^ Didn't they say the same thing about Claire McCaskill?

I'd forgotten that Caucasians were once mayors in this town. Bet they didn't waste money in some back water Swope Park kickback art events. I'd vote for him and I don't live in KC.

Unfortunately, being competent and not a career politician, is an automatic disqualifier in a race where all the other candidates
have been involved in the airport and water department fiascos.

Sadly, @2:17pm hits the nail on the head.
KCMO will continue its swirl down the toilet after the next city election.
Competence, a successful track record of accomplishment, a passing understanding and appreciation of municipal government, moral courage, integrity, and just plain old honesty and common sense need not apply.
KCMO government = the laughingstock of the mid-west.

He's on the toy train.

He'll need to have mass gay and rainbow and unicorn appeal to get the roughly 30,000 votes required to become Mayor here.

Sorry T, I didn't get the Bond villain reference. What gives?

The winning candidate must be skilled and adept at fleecing the general public. That is the only requirement for office here in CK.

Running for mayor and can't even bother to tuck in your dress shirt? Please.

Some people call him the space cowboy

The guy has a great band, too.

If there's one lesson to be learned from Sly James' tenure, it's NEVER ELECT A LAWYER AS MAYOR!

He or she will automatically become a tool for the Developers, if they are not already so.

Lawyers are flunkies for the 1 Percenters, the City needs leadership. not flunkyhood.

He did a horrible job as head of Highway Commission, why would anyone support him for Mayor????

If he is a fiscal conservative, he has my vote!

With Kander out i think this fellow might be my new "None of the Above."

We need to find out who his clients are. Rumor has. Is he is a development lawyer. Moe of the same..

Only those who are already drive an Escalade bought in one way or another by the tax payers has a chance of screwing their way into the mayors office.

Why not? It’s the “in” thing. One’s hierarchy on the victim list is the new measure of social status in America.