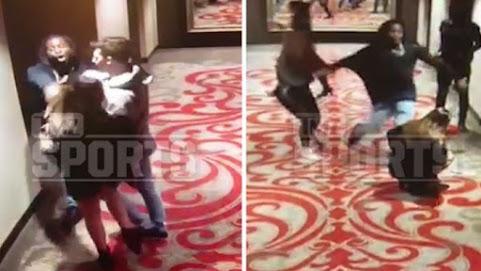 A collection of news stories dedicated to the disgrace and heartache caused by a formerly beloved local footballer who booted a lady out of his hotel room and now faces nearly universal rebuke . . Checkit:

"Following an internal review, it has been determined that in February 2018 a member of the Cleveland Division of Police provided a copy of the police report involving the February 10, 2018 assault incident at The 9 to a representative from the National Football League," the Cleveland PD said in a statement Wednesday.

CLOSE A person was arrested at a hotel and luxury apartment building in Cleveland on the night Kareem Hunt was caught on surveillance video assaulting a woman. But it wasn't the former Kansas City Chiefs running back.

KANSAS CITY, MO (KCTV) -- Coach Andy Reid and his players held their weekly media conference Wednesday. They were fielding questions about what happened off the field. The press conference was packed Wednesday. You have sports writers, but you also had other reporters asking some questions about Kareem Hunt and what's been in the news.


Why Roger Goodell is an even bigger liar than Kareem Hunt

There's not a single party who looks responsible at this point. Kareem Hunt himself said on Sunday that he's sorry for his behavior last February, when he shoved and kicked a woman, Abigail Ottinger, early one morning at a hotel in Cleveland, Ohio.

Local Legacy Stands Out Amid Melee

KANSAS CITY, MO (KCTV) -- Derrion Thomas, the son of Chiefs legend Derrick Thomas, says he was out at a Kansas City nightclub with Kareem Hunt the night he was accused of attacking a man, leaving him with broken bones. "It was really just helping a friend out in a situation.

Jason Whitlock says there's only one way for Kareem Hunt to make it back to the NFL ... and he's giving TMZ Sports the blueprint.SUBSCRIBE -- http://po.st/TMZSportsSubscribe About TMZ Sports:Some of the best stories in sports have been off the field and we're reporting on athletes from NFL, NBA, UFC, WWE, MLB and more!

He did the right thing, he just did it the wrong way.

Probably lost himself no less than 5 million dollars.

Both the Chiefs and the NFL are liars if they claim they investigated this case.clark Hunt is a fucking cunt who never worked a day in his pussy life.

Whitlock gave Hunt a pass too soon. He should have done more research. The guy still doesn't know what he's talking about.

Kareem should have fucked that mudshark slut since he was losing his job anyway.

I stand with Kareem!

I think Whitlock has slimmed down. He looks like he's only 400lbs.

It's not like Cream beat the crap out of the gold digging party whore. He shoved her after she slapped him, then gave her a foot shove that could not qualify as a real kick. He should have had one of his entourage take care of the problem, but that's hindsight. He will mouth a few platitudes, donate some money to charity and will be deemed rehabilitated and on some team's roster within a year.

Is the Cleveland PD also launching an internal investigation as to why they didn't arrest him, beat the shit out of his thug ass, then toss him in a drunk tank with about fifteen KKK members?

Spoiled ape has been carried on a pillow all his life because he can play a kid's game pretty well, and started thinking he was a human being!