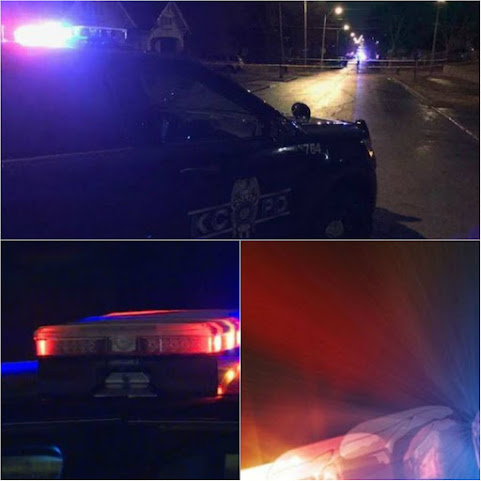 We would be remiss if we didn't acknowledge the latest Kansas City homicide that occurred overnight but wasn't reported until Christmas morning.

Fox4: According to Kansas City police, officers were dispatched after someone called 911 to report that they heard gunshots. Responding officers found a man dead at the scene.

The latest murder surpasses the KCMO homicide total of 131 in 2016. Last year at this time the body count totaled 149 by this time on the calendar.

AS THE MAYORAL AND CITY COUNCIL ELECTIONS APPROACH THERE IS NO NEW PLAN TO CONFRONT THE RISING LEVEL OF KANSAS CITY VIOLENCE &  KILLING!!!

What's worse is that very few of the candidates are talking about solutions or tactics to address this problem and instead promote the idea that social justice schemes powered by taxpayer subsidy will help alleviate the record level murder on Kansas City streets.

KC needs a mayoral murder summit. Will anybody have the guts to show up?

Unlikely. I think we'd have more luck if we just had a Chiefs rally and a quiz bowl about the lack of a decent defense against the run.

Rolling gun battle and shots heard through all of a KC neighborhood. A damn shame.

It's the status quo, nobody really wants to change it.

Where is black lives matter? HMMM? where TF are they day after day, murder after murder. What a bunch of frauds.

The new plan is to keep on letting the bodies pile up and go on with life as usual. There may be a pause when a young person is killed or a white driver in a bad neighborhood. BUT KC is not concerned with the murders, it's the cost of doing business.

Maybe the renaming of the Paseo to MLK will solve the problem.

Democrats keep talking about chaos due to the government shutdown, this must be what they are talking about. Isn't Kansas City democrat run city. Crime and murder.

We need more welfare programs for the ghetto people who are usually the murderers and the victims. I think we have a really progressive prosecutor who realizes sending a murderer to prison is not the solution.

We also need to import more POOR people because we don't have enough already.

In KC the cons are the most powerful force throughout the metro from the streets to the courts. Bad guys finish first.

There was loud gunfire over in Volker near West Plaza a few hours ago. Heard lot's of sirens racing there a few minutes later.

^^^ Might not get reported by media as to not upset the frosty KC Christmas.

sLIE and his clowncil have no idea what to do, they’re only plan is to ignore it and hope it goes away.

Back i the mid-80's I managed a sporting goods store that was located on Troost near the original Stroud's. We did't sell firearms but we sold a lot of ammo. The six biggest ammo selling days were the two days before the opening of Mo.firearms deer season, the two days before New Tears Eve and the two days before July 4th.. I doubt that's changed. The ammo sold before deer season was almost all long gun. Before New Tears and July 4th it was almost all handgun. Now of course with all the illegal ammo being sold on the street it's more widely available and virtually untraceable. The way the last 6 weeks have been in KCMO as far as frequency of murders gives me an uneasy feeling about next weekend and New Years Eve. Be safe folks it's a jungle out there.

I guess we can't get along after all.

If everything would be reported the headcount is over 133. Currently city minions are stockpiling bodies so 2019 will get off to a great start with momentum.