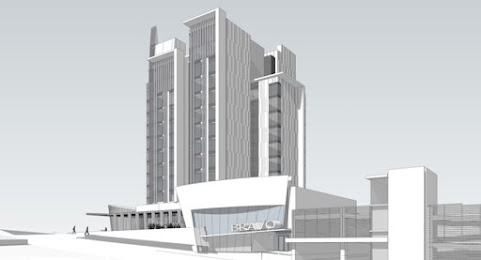 What is this monstrosity???

"The 145-room hotel pitched by developers Whitney Kerr Sr. and Eric Holtze claims the 13-story “Hotel Bravo!” project would be the most luxurious in Kansas City and provide the level of upscale accommodations expected by sophisticated national and international travelers. Most of its rooms would look out on the Performing Arts Center."

There's also a "Project 2" next door where they'll keep the glorified go-go dancers.

Outwardly, the TIF Commission is is playing it cool but that doesn't mean they won't get the cash and destroy what is an otherwise useful Denny's where po'folk meet up, police recruit snitches and lower echelon politicos take their meetings.

The Denny's more useful, has a better business plan and doesn't require tax money. It's not much to look at but we should probably keep it.

I think the Paris of The Plains is going to need a Yellow Vest style event before these old bastards and city hall totally destroy and displace the entire population of KCMO.

Grand Slam, How about that momentum?

Kevin's blog? Where he writes from the comfort of his modest single family home safely outside the urban core about how great noisy, crime ridden, and polluted city's are? Or someone else?

Yip them T-Mobile Sprint Execs are gunna need this hotel to dish out parachute money away from the threat of the unwashed.

Another stupid idea for the downtown area that needs to be pitched into the trash can. Now if the developer wants to build it with 100% of his own and the banks money then by all means let them have at it.

Isn't Oxford on The Blue enough for this guy? Were sick of him and he's a menace to the average person struggling to get by and get ahead in this low opportunity cut throat town.

^^Says the shut-in from Frogville.

^^^ nobody chimes in again!

Another terrible rendering,looks like a dorm and student center for beta colony 854.
Try one of those 15 rm regional boutique hotels that survived first.