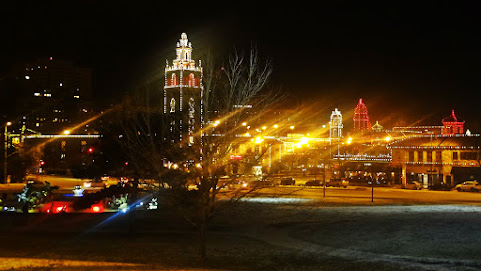 The spate of rising local violence has hit this town's premiere entertainment district once again and during it's most celebrated time of year when the iconic lighting display attracts tourists from around the world.

SHOTS FIRED ON THE PLAZA TONIGHT AND YOUNGSTER INJURED!!!

Off duty officers in the area reported hearing shots fired just before 6:30 p.m. Reports were also being received by 911 callers of a shooting at 47th and Jefferson, near the parking garages.

KCPD said they found one female victim who appeared to have been shot while inside a vehicle. Her injuries are reported to be non-life threatening.

Police said they have very little suspect information at this time and the circumstances of what led up to the shooting are still under investigation.

Authorities have blocked off an area where the shooting occurred while they investigate. Police say it is not believed there is still an active threat to the public.

Fox4: 1 person taken to hospital after shots fired at the Plaza

So we've still got some major problems on the plaza.

I think moving the streetcar down here is only going to make things worse. Seems like a lot of businesses have left because of the violence. Usually it's not so bad for Christmas.

Better title for ya T: Christmas in Kansas City = shooting.

There, fixed if for you.

Did sLIE hide in the bushes again! Hahahahaha!

^^^ sLIE doesn’t go to the plaza, it’s too dangerous for him!

Any description of the hoodies they were wearing?

plaza is the new hypermart

KANSAS CITY WAS ON THE VERGE OF BECOMING A WORLD CLASS CITY. THE CRIME WILL PUT A END TO THIS. WHEN THE TOURIST DECIDED TO VISIT ANOTHER CITY OR STATE YOUR TAX RECEIPTS WILL DECLINE .PEOPLE WILL NOT MOVE INTO YOUR TWO THOUSAND DOLLAR A MONTH APARTMENTS DOWNTOWN MIDTOWN PLAZA THEY WILL ALSO LEAVE WALDO I HAVE SPOKE TO MANY THAT ONCE LIVED IN WALDO, THEY LIVE IN LEE'S SUMMIT MISSOURI .LEAVING KANSAS CITY.

I'm sure the news will report it was a "teen" that did it. "Teen" being code for black person. They are like termites and ruin everything.

Pass the donuts and a glass of city tap water.

ANOTHER shooting on the plaza. Who wants to guess what the shooter description is? Cmon...be honest.

A correct guess gets you labeled as a racist

Unbelievable to think that this is what the Plaza has regressed to. Sad.

This is no longer the classy destination shopping experience of your Grandpappy's generation.

Entropy is everywhere, the center can no longer hold.

The cracks are showing in what once was a great nation.

The Plaza is a shithole, and KCPD can do nothing to stop them.

Kansas City has a large black population and when you have that you have excessive amounts of crime that's fact. You all can blame sly James too. He's the one that caters to them. They are uneducated people and that will never change. To try and live together with them has proven to be a failure. Sad for the very few blacks that try life for them is trashed by the majority who want to act like wild animals.

I only go to Plaza to eat at a couple places, then high tale it back home. What else is there? I'm not going to buy overpriced Jew diamonds from Tivols.

Since this happened on the Plaza Slie is not concerned about it since the shooting is far away from downtown.

Yall are a bunch of pussies. Leave KCMO to the grown ups, you suburban and exurb pussy boys. Hahaha

6:41, call your OB-GYN and schedule an appointment. Something is wrong with your pussy and it's making you hysterical.

Sly James has been a complete failure as a Mayor. Crime being the number 1 issue in KC has been unaddressed. Adding a City paid for Grocery in the Inner city did nothing to lessen the crime waive.
The only thing that will address KC crime is the addition of officers on the street.

Hood rats will cause plaza to be another banister mall

I wonder if the new Plaz' ownerships feels any buyers remorse?

The solution to all of this is to take guns away from white people!!!

9:38 that’s funny right there! We wouldn’t want the blacks to feel uncomfortable and all! Hahahahaha!

8:03 killa shitty is the bannister mall now, all they did was spread out once they shut it down, especially since petersucker doesn’t prosecute blacks ever.