Aftermath: Only The Most Miserable People Moralize About Former Kansas City Chiefs Running Back Kareem Hunt Punting That Hottie In Hotel Hallway!!! 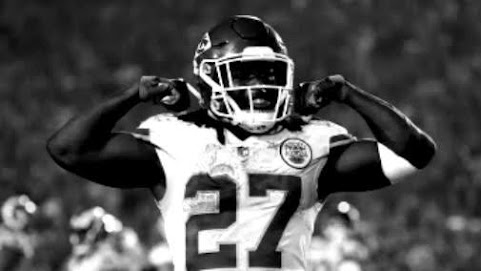 Three bad options here that we noticed eat up worthless social media feeds from a bevy of people who don't know anything about football . . .

- Sermons raging against Kareem Hunt for quite literally kicking some young lady out of his hotel room.

- Pontificating against both the NFL & the Chiefs organization for waiting too long to take action.

- Preaching about the evil of the adult teen hottie and her sexy boots who was the victim of Kareem Hunt's shoe.

We linked this last night but it deserves another look because the guy seems reasonable and his apology and ownership of his responsibility in the hot mess is commendable and rare . . .

Meanwhile, the vast majority of the "discourse" regarding his offense was mostly just recycled, insipid pablum from mobile phone pundits that always passes for discourse among the working-class.

The Kansas City news editorials on the topic were cowardly unsigned tripe nearly as vapid as the angry tweets, posts and emojis that are really just a scheme to keep Silicon Valley tech bros in the money.

Luckily, for the moment it seems The Chiefs can survive without Kareem Hunt, meanwhile we're seeing "peak social media" play out because most people don't want to lose their job for their stupid political beliefs, your drunk uncle can't even convince your long suffering aunt about most political topics and the power to push ads via garbage rando pilfered content is mostly just a ponzi scheme that was always funded by the Russians.

I do like the comments on TKC better than my FB feed. Seem like they are more honest and more knowledgeable. Not just the crap people are writing on the toilet.

TKC readers are lucky for being able to post annonomously. It maybe the only place on Internet we can do it. Can't cut Cream of Wheat any slack since he had the money to hire a real possee to keep him from fukn up, unlike us poor slobs out on our own. I've heard white snatch is bad voodoo for dark men, but thems the rules bub.

nothing i read makes sense anymore

this dude pushes a crazy bitch and half heartedly kicks her and he's banned?

bullshit. poor Kareem isn't well known enough. if he was a top tier NFL star he would get a 2nd chance.

this dude wasn't even arrested after police were called.

kareen desevers another shot. this ZERO TOLERANCE shit sounds good and is big and bold but it's bullshit and stars have all types of work-arounds on this bogus shit.

I’ve heard enough of this ghetto thug. I want to hear from the drunk slut.

Cream has already embarked on his apology tour. He will enroll in anger management classes. He will donate to #MeToo. The NFL will then pronounce him a reformed sinner. He will sign with another team. Eventually he will do it again.

He will sign for more money with a better team.

I dislike the thug culture, and what many of the NFL players represent. However, a crazy drunk biatch trying to get a black baby-daddy I don't have much remorse for. Both of the people involved don't really function in the same civil society as most of us do. Because of this we can't really understand their actions and reactions. It's a live by the sword die by the sword life; not for me, not for most civilized folks. Frankly I don't even think Hunt should be punished more than a tiny slap on the wrist. His actions in the hotel don't affect anyone living within the law. The woman idolizes that life, and got what she wants, what's the problem?

I thought the Chiefs were too hasty in firing him. Bench him maybe until the rabid social media masses moved on to something else. I know 23 is "adult" but it's still young when you have more money than brains, it's 3:00 in the morning and the party's still going. That female was taunting him, took the first connecting swing at him (probably why no charges were filed) and looked too drunk to stand on her own. You see it all the time on the football field...guy gets a hit he doesn't like then jumps up and a fight ensues. On the field they get a flag. On this, he loses his job. If he were a more established high profile player in the league, he'd get benched, fined & counseled.

Football is a nasty sport played by nasty men. Sounds like this broad was throwing out the N-bomb pretty liberally at Kareem. However, you just gotta walk away and call the cops man. Nothing is not on camera these days.

All that said, Hunt should get another chance at some point. When that is, who knows? Will it happen, I don't know?

She’s a drunken whore. Nothing more than a whore mudshark. I couldn’t care less about a whore like that. But, cream deserves being cut. It will all work out for him anyway. He will get suspended and have to do some useless counseling and then some team will sign him. It’s going to cost him millions but it’s better than going back to the shithole ghetto where he belongs.

Hunt's dismissal was simple virtue-signalling. As 8:22 mentioned, Hunt will embark on a year long journey of public cleansing and then sign with another team. If Hunt was White and called someone a "Nigger", he would never play again.

So, the drunk 19 year old white girl who wouldn't leave has no responsibility? Stupid

4:28 - curious, you take that aggressive stance when around black people or just when you're hiding behind your keyboard? I think I know the answer.