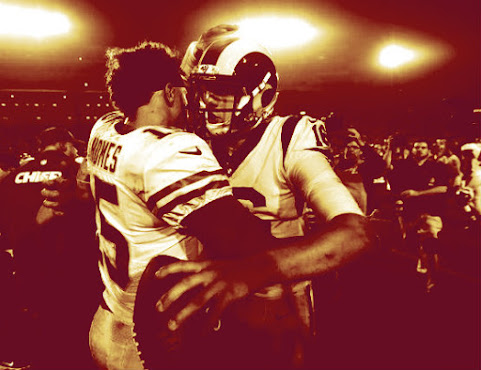 Over the past 24 hours a note from a Rams fan has garnered nationwide attention and thousands of shares across a variety of social media platforms.

The guy has garnered threats, questions about his loyalty to his "favorite" team and a litany of hateration but local KC Chiefs fans seem to be taking his message to heart . . . 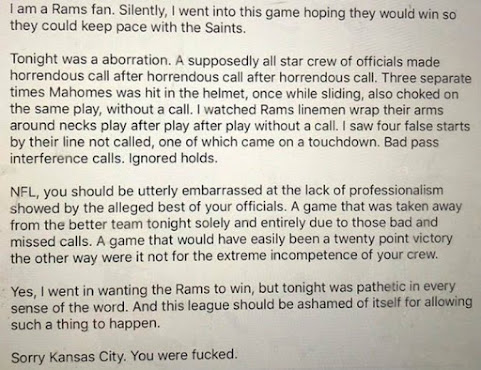 Among mainstream critics, the officiating has earned more outcry as local fans are still attempting to come to grips with the defeat.

NYPost: The NFL pissed off everyone with Rams-Chiefs ‘all-star’ refs

Crybaby chiefs will look for any excuse to detach from reality.

Obviously turning to face book is their best move.

^^^except and this is key here geezer, it wasn't the fucking Chiefs who complained about the refs you senile bastard!!! Take your worthless narrative and jam it up your ass. Stay on topic paw paw!

7:48 needs his Depends changed and ass wiped. F Troop marathon coming on in half hour. Watch it butt boi.

8:04 what’s with you young boys always talking about old guys butts. Don’t you ever get any pussy?

The refs sucked but that isn’t why the Chiefs lost. They lost because their offensive line is fat, slow and weak and every defensive player they have is a cunt.

Did the Associated Press give you permission to use that photo? I fucking doubt it.

The AP owns TKC's shitty instagram filers? I doubt it. You broken down newspaper pole smoker. Please go jump in a pile and pretend that memes and google images didn't just destroy your crap business. We all really doubt that the AP has anything to do with you, rubberneck.

The Chiefs will win next time they meet. In the Super Bowl!

Chiefs fans have sunk to a new low with this, pretending to love the rams? How embarrassing.

The AP owns the original image. They sent a photographer to the game and he used a camera to capture the image.

And Tony thinks he can use it for free.

Get it? Are you that dumb? Or do I need to explain where fair use ends and copyright infringement begins?

^^^^^^^^ Please learn what "Fair use" is. Are you that dumb? You must've worked for the Kansas City Forking Star to not understand that. TKC's image is clearly parody and transformative.

Stupider I should say.

Truth is, TKC didn't even need to retouch it. Google catalogs the image in a smaller scaled down version and keeps it on their servers, same with bing and every other search engine.

The dying NFL got what they wanted. Some prop in ratings that are going down every week. They need something to improve their product.

^^except and this absolutely key here geezer...the NFL ratings are up, way up this year. Biggest ratings increase in five years. So basically you have no fucking idea what the fuck you're talking about, do you geezer!!! Worthless!

and can't get up.

Oh wow. You mean...sports are rigged? Say it isn't so! Fucking plebs.


LOL no one gives a shit except a couple of chair ridden computer geezers.