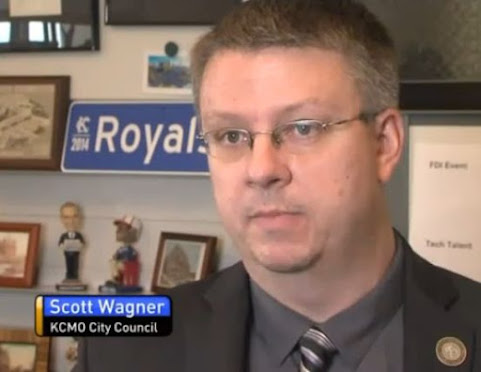 Councilman Scott Wagner is a very nice guy, he's a conscientious elected official and also very responsive to his constituents.

THE COUNCIL DUDE IS COMPLETELY WRONG ABOUT RAISING PROPERTY TAXES FOR TO PAY FOR KCMO AFFORDABLE HOUSING SCHEMES!!!

Here's his plan and right now he's listed as the only sponsor of this hot mess obviously aimed at helping his election chances for the mayoral race.

Ordinance #180923: Calling for submission to the qualified voters of Kansas City, Missouri, at the general election to be held on Tuesday, November 5, 2019, the question of temporarily increasing the ad valorem tax levy for a period of ten years for municipal purposes by five hundredth cents ($.0500) per one hundred dollars ($100.00) assessed valuation on real and tangible personal property within the City;

A word from KICK-ASS TKC TIPSTERS on this topic:

"I don't trust Wagner with anymore . . . Only took him 1 year to betray the voters and spend GO Bond money in the exact opposite manner of how he told voters it would be spent . . . Now Wagner wants to raise our taxes? No thanks!"

As one of the main Northland contenders for mayor so far . . . He should be doing a lot better.

Sadly, this well-meaning but ultimately tone-deaf consideration could doom his campaign before it starts.

Higher property taxes to make it harder for people to stay in their homes won't help affordable housing? Quite the opposite.

Jesus this mayoral circus is just getting worse.

Any money given to city hall will just be handed over to developers and other "community benefit" organizations. It's not for housing, it's for payoffs.

See you at the property-tax victory party!


O.K. you wack jobs that elected these people are crazy! Tax increase over the go bond that goes up every year???? Do it and you will tax everyone out of their homes, PLUS affordable housing is not our responsibility!!!!!!!!!

Do you see what you stupid democrats have done?

So, first you give massive subsidies and tax breaks to wealthy out-of-town developers to build "luxury" apartments.
Then you propose a plan to increase property taxes on middle income residents.
Then you give speeches about income inequality.
There may be a consistent governing philosophy in there somewhere, but it's sure hard to find.
Other than the notion that wherever the issue du jour comes from, the "solution" is to increase taxes.
Why don't these folks try focusing on providing decent basic services that actually impact residents' lives and leave the social engineering to someone else?
Snow removal might be a timely place to start.

This guy is at the heart of the problem in the Council.
This City Council is the best advertisement for the Republican Party.

Yes! You are right. Hate him and his plans for you! No taxes for anything! Hate your government!

Dumb plan. Not even original, basically he's trying to do the same thing as Scott Taylor with his "revive the east side" ordinance. Nothing every gets fixed, but City Hall gets another revenue stream or has to pay out more money to political cronies.

Another reason to vote for someone, anyone else.

Who did you let talk you into this? Quinton or Sly? They screwed you over man.

The only way KCMO knows how to approach a problem, tax their way out. and then all blame goes to the taxpayer and not councilman.

This plan sounds like its roots are in the 3rd district.

8:22 (aka Gopher): KC voters have approved any number of tax increases lately, most recently the library tax (which we approved to make up for taxes stolen from the library to subsidize luxury downtown living for millennials, superfluous hotels downtown, and an absurd fixed rail fair weather only "transit" folly downtown. We taxpayers have invested a lot in our downtown. It's time to declare downtown a success and use our tax dollars for things that will benefit the entire city, like street repairs and clearing after snows like the one we just had and that is not only not abnormal, but is hardly equivalent to really major storms we've had in the past.

Why would voters fall for this proposal? Fool us once, shame on you. Fool us a thousand times, shame on us.

^^You are right...it's un-American to take your money! Rise up! Don't let this happen! The government is your enemy! Don't be fooled anymore true patriot. Can we cout on you to rise up when the time comes to take the government back and give it to hard-working Americans like you? Keep watching Fox News for further details! No collusion!

"is essential to the comfort, convenience, safety, and happiness of the citizens of the City"

LOL does Wagner dream this stuff up or does someone do it for him?

Kansas City is a global city for tourism, culture, education, and business. For the last several years, Councilman Wagner has worked strategically with UMKC to open business opportunities for KC businesses in China. His work has resulted in a new sister-city agreement with Yan’an, and Memorandums of Understanding with Changsha and Ankong, China.

Born in a barn somewhere in rural missouri?

^^^ Seems to be the main requirement before anyone is considered fit for duty in the KCMO politcal cesspool.

Sucking the system dry of all of the cash and assets


See Wagner is a team player all the way.

KCMO taxes are so fucking high as it is. The one percent, just 'cuz, tax is one of the most dumbest taxes I've ever heard of.

God damn everyone running this town is retarded


Prairie fire in Leawood is so much nicer. There isn’t a sewer smell when you walk the sidewalks, and there is plenty of fine dining and entertainment. Hardly any crime and a well funded police force. You don’t have to see women with hoops in their noses and big wooden circles in their ears with green hair. In johnson county you find cities that are far better managed like Overland Park, olathe, and Leawood. Yes, those cities have their own problems. However, there is far more accountability in their governance. Maybe the airport should be in johnson county. I personally don’t want it there, but you can bet if it had to be there the construction would already be happening and the budget wouldn’t be so screwed up.

KC voters are idiots. They love to vote for taxes and black dumbocrats.

When are you voters, the real taxpaying voters going to step up and put an end to this leadership of operating stupidity that is not only ruining a great city but putting it and it's residents into a debt it will never be able to crawl out from under?

Time to take the trash out and keep 12th and Oak clean of this sort of rubbish thinking.

Some Thursdays you win some and you lose some...and hold some.

Scott and his wife are still delinquent on KCMO property taxes for 2011-2012.

A good budget start would be to not name anything after a dead member of a greedy family that will require yearly royalties be paid to said family.

At least Scott is white.

KCMO will likely put it on an "off" cycle election, the urban activists will beat the drum among their followers to get the yes vote out. People wanting government handouts will vote yes, whether or not they own property. Meanwhile there will probably be no organized anti-tax opposition among working people who pay the taxes because they will be too busy with working and living so they will not go vote no.

9:07 Just shut up you piece of shit. Do you even own real estate property? I highly doubt it. Do you even own a home? I highly doubt it. Do you even realize they are already raising our property taxes thanks to the fucking go-bonds? You you think that 'white flight' is good for any city? It's going to happen and K.C. will then become another example of a democrat run city gone wrong, like most democrat run cities. And fuck you all of you stupid ass minorities, social justice warriors, and liberal shitheads who vote in things like the go-bonds and the earnings tax. YOU people are killing the American dream.

They need to catch up on assessing houses with their proper share. I see homes in my neighborhood selling for over $500,000 that have never had their taxes adjusted or their homes reappraised for tax purposes and when their houses sell I they are paying half of what I pay for my much smaller and less expensive house.

Kareem Hunt caught on hotel video assaulting a woman. Where is all the white guilt liberal meetoo outrage? Is it because he is black they dont go after this? I had no idea Hunt was such a dirt bag.

Will the local news cover it?

^^Who cares? This is about property taxes, not football. Go sell that shit elsewhere.

Finding a pudgy plain middle aged divorced woman to mooch off of is a far better solution to the search for affordable housing.

Espescially if it chases out the riff raff like sanctimonious Super dave.

Hell no, when all of us leave, who will you tax? NO MORE taxes until the entire council completes an economics class!!!!!

Dream on 5:26, what's the matter Dave speaking the facts is to much to handle?

Sure that wasn't you Scott?