The New Kansas City Airport is stalled and local media isn't "reporting" anything but presser garbage and happy talk whilst the tone of the discussion behind closed doors has become downright vicious.

Throughout his tenure Mayor Sly's team has used the lawsuit threat skillfully to back up rushed deals and scare away any real criticism or opposition.

However, this time around, the lame duck Mayor and his team aren't scaring the Council -- Comprised of half a dozen of his colleagues who now want his job. 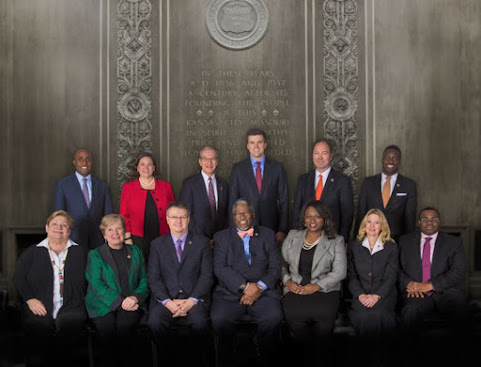 "If the Mayor's people think that bullying council is the way to get this deal moving again, they must be forgetting that his term is just about finished. (Mayor) Sly has always used the threat of lawsuits but we're talking about hundreds of millions of dollars here, if we have to go to court to save KC from committing to a disaster and get more input from the public, I think the voters will understand. Getting this right is important enough to keep having tough conversations in public. The behind the scenes influence peddling is getting out of hand, the Mayor's team just doesn't have that kind of authority any longer."

Anybody who claims they know what's next for KCI is probably faking it. Fact is, the only thing for sure is that the new airport costs continue to skyrocket, deals are following apart and resistance to the current plan has garnered momentum . . . #TBT -- Longstanding questions about Edgemoor's ability to bring the project in without going horribly over-budget continue to arise.

Meanwhile, old school KCI serves the people of Kansas City at a record breaking pace whilst the Aviation department censors/blocks TKC on airport WIFI because of hottie models but continues to allow the sale of pr0n in the terminal gift shops.

Of course it's all threat and bluster. That's all Sly's people have left. It would be funny to watch this thing unfold if KC wasn't going to get stuck with another lemon like the streetcar.

Adding on and improving the airport was always the better plan? Why can't we go back to that? It seems like the current deal violates what voters approved earlier this year. A blank check could bankrupt this city and it's obvious they're not being clear about how much this is going to cost.

We need a new airport, they need to get started building NOW!

More negativity from TKC, that's nothing new but I think you should understand TKC that it is unwise for you to report closed meeting discussions. There needs to be a good faith negotiating by everyone in this process and the council spreading rumors will not be tolerated. The future of our city is at stake here and this isn't a subject for social media or blogs. The voters have spoken, they want a new airport. Trying to stop KC's momentum because of political ambition should not and will not be tolerated and does not need to be part of KC's conversation. We need to focus on solutions.

New airport is ALREADY a disaster, it's only going to get worse if the next Mayor of KC doesn't take charge. So far, I see the candidates running to scared to really talk about it.

With this "Gang That Couldn't Shoot Straight", KCMO will probably end up spending the $2 billion on legal fees and lawsuits and we'll end up with the same convenient airport terminals we have now.
Where are all the "national media" who constantly write puff pieces about KC based on two-day visits by coastal out-of-towners who still think Kansas City's in Kansas?
Hype, bluster, outright lies, and incompetence as far as the eye can see.
KCMO=the region's sucking chest wound.

There's that "momentum" buzzword again. As used, it means continuing to do the same things badly.

Too many cooks spoil the broth. Too many lawyers bankrupt KC.

TOP PHOTO -- IF YOU SEE AN UNATTENDED TICKING TIME BOMB

After taking off from KCI on the Burns and McDonnell party plane, James/Schulte/Justus detonated their parting gift for KC taxpayers!!!

The guys that sat in the back of the class and god D's and F's have a major influence in the City Council.

^^and the shitheads who dropped out spend their days here. You're proof of that.

"Will not be tolerated?" Don't make me laugh. TKC is actually holding you and your corrupt fool of a boss accountable. Please tell Sly he's not as smart or competent as Idi Amin and his attempt to be a dictator and control speech is just sort of pathetic.

Speaking of dropouts, get back under that desk and take care of Mayor Bullhorn's needs! :)

Reminder: Lame Duck refers to someone in office AFTER the election has taken place and before the new winning candidate has taken office. It does not refer to someone's last six months or so in office.

Anyway, this airport stuff is retarded and we should keep the one we have.

It's time for a CRIMINAL INVESTIGATION into this disaster. Charge anyone and everyone who was out there hyping this fiasco to the KCMO voting public. Including former and current mayors of neighboring cities, paid chamber pundits, celebrities, council membersetc. They all misled the public on pricing and planning: that could be voter fraud?

Maybe we should just go ahead and start that project in Johnson County. Big Boom to Gardner.

Gopher boi is now threatening TKC and all the good people who visit and participate on a blog? Are you effing kidding me? How bout this for a threat gopher boi,

The City has an Ethics Hotline, which provides employees and residents a way to anonymously report suspected abuse and wrongdoing by elected officials, members of appointed boards and commissions, City employees, contract employees, vendors, bidders and anyone doing business with the City.

The City encourages employees and residents to call the Ethics Hotline at 1-800-340-3132 to file a complaint whenever wrongdoing is suspected.

Clearly the gopher is upset with another kcmo complete failure that sLIE is trying desperately to cover up. Your city is the laughing stock of the Midwest, god this is funny stuff!

Don't get excited, Go4KC. Tony's just making up stupid shit based on stuff WE made up to help make him look foolish.

^^^ you’re right about one thing, gopher boi doesn’t need any help looking stupid, that’s why they canned his ass from tv news, he’s an idiot

Well, 11:44, you do a great job of almost being as funny as those expensive clowns at City Hall. :)

Fox 4, KCTV 5, KMBC 9, and KSHB 41 never report the real news in Kansas City. It’s a damn shame. They are afraid to go into city hall and question those responsible for boondoggles. That’s why local news in KC sucks.

^^have you gone to question yourself? Why not? Loser.

Gee, I am so glad that I get to pay my 1% welfare payment to KCMO, so people like Go4KC can comment here.

THANK YOU FOR STATING THE PLAIN TRUTH!

What they do is NOT news, it's entertainment to sell advertising. With a few exceptions, local TV news staff are an embarrassment to the concept of informing the public.

KSHB 41 has led 2 out of the last 3 days with "breaking news" of a truck accident on the highway. Then Christa Dubill pitches it to their national entertainment reporter for a bunch of nonsense stories. I start to feel sick from their lack of professionalism, so I switch to KMBC 9.

KMBC 9 has Laura Moritz and Kelly Eckerman talking about Taylor Swift and the Kardashians, reading off 2 different Top 5 random rankings, gushing over the Chiefs, pitching it to Martin Augustine in an 1800's cabin, and then telling viewers which of the above stories was their own favorite! Lunacy lives at KMBC.

How do these people hold their heads up in public?

How did Slie escape the gorilla cage?

“How do these people hold their heads up in public?”