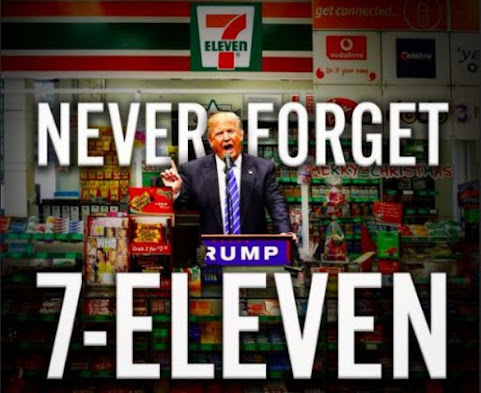 Don't get it twisted, crime typically spikes in the last quarter of the year as broke-ass local holiday shopping starts early . . .

An Independence, Mo., police dispatcher said two 7-Eleven stores in their area were also robbed. Those included a 1 a.m. robbery at 23rd and Harris and a 2:30 a.m. robbery at 40-Highway and Crysler.

Thankfully, no injuries have been reported.

Shop and Rob.
Been going on for years.

5 in a row hasn't been going on for years you fucking loser @7:32 - Stop being a jaded geezer and go rake your leaves!

These are hate crimes against Hindu Indians.

Old people sure are dumb!

What are you doing up, faggot? It isn’t noon yet.

Our descent into third world madness and chaos continues unabated.

Seven Eleven is too cheap to do like QT and hire off duty cops as security.

8:05 proves incest inbreeding has done wonders for his family. Give your little sister a break on Thanksgiving.

Remember racist Joe Biden said, " You can't go into a Dunkin Donuts or Seven Eleven unless you have a slight Indian accent."

^^No you remember loser. i have a life and get laid regularly. You don't. You remember.

Yes you get laid regularly. From behind. Right, faggot? You like it a lot.

^^you throw "faggot" around like it's some kind of insult. You must be old as shit! Stupid, worthless geezer!!!! Hahahahahahaha!

More "benefits of diversity and inclusion".

The word faggot is a compliment to you, right?

^^It's just a word used by in-bred retards. It has no meaning. It's comical seeing it uttered by a bunch of geezers who sit in shitty diapers all day! Hilarious!

There are always too many people in QT to rob

Faggot or maggot, what’s the difference.

They call me the Geezer Hater,
I’m a chronic masturbater,
I sit on the stool,
Yanking my tool,
Hoping my gramp joins me later.